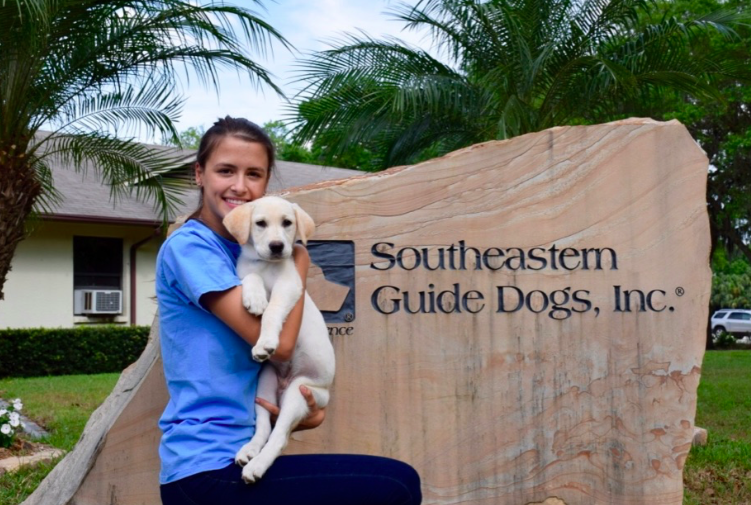 Folkman poses with Suba moments after picking him up from Palmetto, Florida, to begin his obedience training. Credit: Devin Folkman/ Achona Online

The bowl also included several commercials sponsored by Subaru in which promoted the work of Southeastern Guide Dogs , a non-profit organization, featuring Academy’s own Devin Folkman.

Folkman, a senior, basketball player, and AHN “lifer” has been raising guide dogs for two years, and is currently raising a yellow Labrador Retriever named Suba. Following the national premiere of her feature on Animal Planet, ACHONA received the chance to chat with Folkman about her experience with filming the commercial as well as her work with Southeastern Guide Dogs.

When did you first hear about Southeastern Guide dogs?

“I’ve known about Southeastern Guide Dogs since I was little. My parents volunteered to be a breeder host for the organization when I was around the age of eight. Our family is currently on the second dog for breeder host.”

How did your family decide to raise a puppy and what was it like to raise your first?

“When I was young we would go down to the facility to get our breeder dog, and I would always want to go play with the puppies. Once I heard that these puppies were used for the greater good I knew I wanted to take part in the volunteering. At the time I was too young, but at the age of fourteen I worked hard to receive my first dog Mastro. I was so happy yet filled with nerves when picking up Mastro, because you have to remember this is not your personal dog. After about a year of essential obedience and many exposures to prepare the puppy for an important career, you must return them back to the facility for ‘puppy college’.”

How was your family approached about doing a commercial for the Puppy Bowl?

“The commercial was done with my second puppy that I have raised, Suba, sponsored by Subaru of America and he will be going into IFT (in for training) April 22nd. When my parents first told me about Animal Planet wanting to do a commercial on our family I was a bit hesitant. To have a filming crew come into your home with bright lights and being interviewed without viewing the questions first is extremely nerve racking. Then I thought about it and realized the commercial is a way to spread valid information about the organization to help raise awareness and that is something I have been trying to do for the few years.”

What was it like to film it then see yourself on national television?

“Animal Planet loves real actors and natural commercials so I was very comfortable filming my interview part in my room, minus the huge lights and ten people watching me, along with people downstairs with TVs and headsets. In the commercial they also filmed me doing commands in my room and walking with Suba down the street. The crew and interviewer made me feel really comfortable. They were very nice people and I appreciate the fact that they wanted my family for the commercial. I was freaking out to see what it looked like, and very anxious since it was filmed back in November. They picked good parts of my interview and I was overall pleased with the shots taken in the commercial. They did a great job. When I saw myself I did not think it was a big deal at first, but when I started receiving messages from family members, friends, and others puppy raisers, I felt proud of my family for agreeing to do the commercial.”

What do you take away from raising a guide dog?

“Raising a guide dog has not only transformed myself to become more responsible and aware of those who suffer in life. It teaches me that with each dog I can change a life of suffering into freedom; through this I leave my own mark on our community and future, one paw print at a time.”