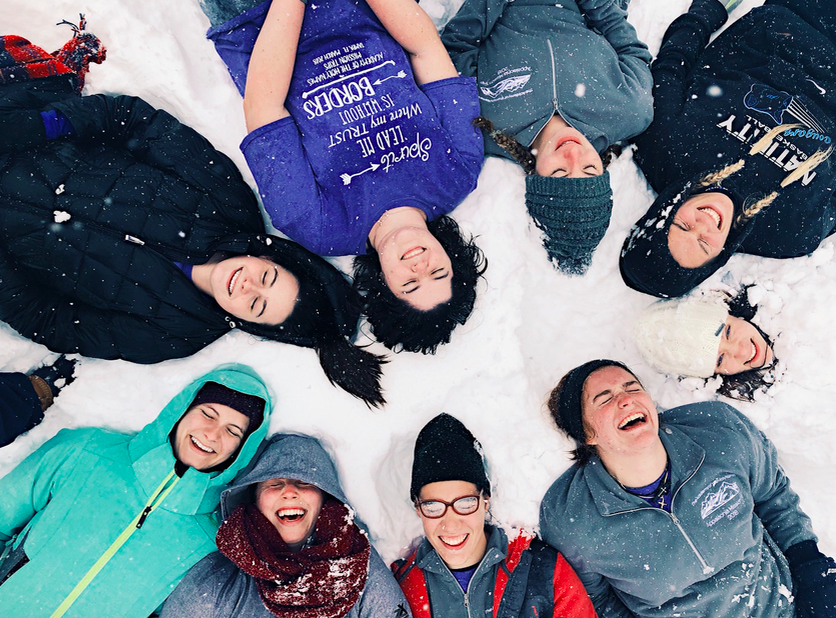 Upon landing in Charlotte, North Carolina, the missionaries made a three hour drive to their home for the week:  The Appalachian South Folklife Center. After arriving, the group of 21 shopped for groceries for the week, prepared dinner, and began the one of the six nightly prayer services.

As all 21 missionaries woke up the next day ready to begin their first day of work, they were immediately met with the sight of the heaviest snowfall of 2018 for West Virginia. Unable to leave the property of the Appalachian South Folklife Center due to the dangerous weather conditions, missionaries used the day as an opportunity to play in the snow, explore the property, and bond.

As weather conditions improved, the missionaries were able to head to The Wade Center the next day. Located in Bluefield, West Virginia, The Wade Center serves to assist local children spiritually, physically, emotionally and intellectually through programs and mentoring.

After arriving to the Wade Center, missionaries were put to work paining, organizing, and graveling the driveway.

“I enjoyed painting because with a large amount of people we were able to finish quickly and efficiently. Our group worked so well together and made a bond that will last forever,” says Scott (‘19).

The next few days, seven missionaries returned to The Wade Center to continue organizing a storage room while the other 14 stayed at the Appalachian South Folklife Center. The group that remained at the Folklife Center braved the cutting weather and began to help with clearing out a tool workshed and the basement below it. The next day, the same group constructed a bookshelf and helped clean out the library on campus in order to transform it into a relaxing place for all who visit the Folklife Center.

On Tuesday and Wednesday night, the group was treated to authentic Appalachian folk culture. This included a performance by Folk Musician and Historian, Jimmy Costa, and square dancing lessons.

“One of my favorite parts was square-dancing. It was really fun since I’d never done square-dancing before, and it definitely bonded our group,” says Lee.

On the trip’s fifth and final day, missionaries experienced a Keepers of the Mountain Tour in Charleston, West Virginia. There, they learned about the history of mountaintop removal for coal-mining purposes, and the effect in which it has made on the environment and human health. The tour ended at an area overlooking what was once the site of a mountain, and is now depleted by the practice of mountaintop removal.

Before leaving, Paul Corbett, President of the Keeper of the Mountains, presented each member of the group with a thread to be tied around their wrist. To Corbett, this serves as a reminder to each missionary that they are a “sacred thread” in the fabric of life.

The following morning, seven missionaries visited an outlook at the Appalachian State Park to enjoy one final view of the Appalachian mountains before departing to the airport.

“My favorite part of my trip was most definitely the bonding. Even though I didn’t become super close with every person, I got to know a little bit about everyone. It was especially fun when a group of us pulled an all-nighter just to watch the sunrise,” says Scarpo (‘21).

“From this experience, we learned that even the simple things, like building a bookshelf or painting a room, could have a life changing impact. Sometimes helping someone who suffers doesn’t mean doing something noticeable or showy, sometimes all it means is taking time for the little things. Sometimes all it means is showing God’s love to someone else. In Appalachia, we did just that. We were God’s love for all the people we interacted with, including our fellow missionaries. We are forever changed by this experience,” says Rodriguez.