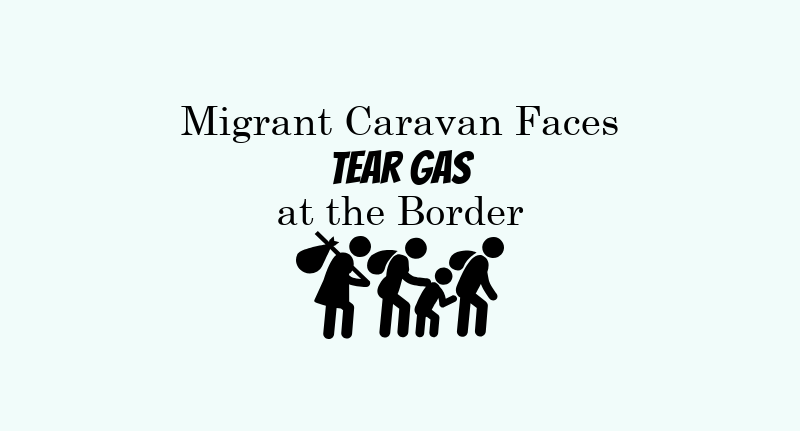 The members of the caravan consist of migrants from El Salvador, Guatemala, and Honduras. (Photo Credit: Juliana Ferrie/Achona Online/Piktochart)

The members of the caravan consist of migrants from El Salvador, Guatemala, and Honduras.

On Sunday, Nov. 25, 2018, South American migrants arrived at the border between the United States and Tijuana, Mexico. The migrants had been traveling in a large group, referred to as a “caravan,” from several different countries. However, conflict broke out soon after their arrival at the border, resulting in the use of tear gas by the U.S. border control.

A migrant family, part of a caravan of thousands traveling from Central America to the U.S., run from tear gas in front of the border wall between the U.S. and Mexico at Tijuana on Sunday – @Reuters pic.twitter.com/R42zIHedJu

According to reports, before this occurrence, members of the caravan marched towards the border peacefully. Upon their arrival, they were met by police, causing the group to disperse. After the caravan split, some of its members began to tear down portions of the border’s fencing.

Consequently, United States officials chose to use tear gas against the migrants, which border police claim was in self-defense. Officials state that they took action after migrants began to throw stones at them. Mexico has since implored the United States to issue an investigation into these events.

Isabel Laboy (‘19) said, “I disagree with the use of the tear gas entirely because I have witnessed the effects of tea gas through the experiences of some of my family members. It was horrible. The eyes of my younger cousin, who was 10 at the time, were really messed up for a while, but she is fine now. This happened a year ago.”

This course of action has been met with controversy throughout the United States. Some citizens support this decision, whereas others disagree. For example, President Donald Trump released statements expressing his support of this decision.

Trump said, “They had to use [it] because they were being rushed by some very tough people, and they used tear gas. And here’s the bottom line: Nobody’s coming into our country unless they come in legally.”

Would be very SMART if Mexico would stop the Caravans long before they get to our Southern Border, or if originating countries would not let them form (it is a way they get certain people out of their country and dump in U.S. No longer). Dems created this problem. No crossings!

On the other hand, others question whether this choice was ethical considering the presence of women and children. Members of the caravan described their feelings of personal terror as a result of the tear gas, as well as their fear for the lives of their children. Although tear gas is nonlethal, it poses risks to those who are exposed to it. Not only does tear gas cause burning sensations in the throat, lungs, skin, and eyes, but it can also lead to more serious consequences, such as cataracts, nausea, vomiting, and asthma attacks, which can potentially lead to death.

In addition, tear gas is more harmful to children. When the substance is released, the majority of it remains concentrated near the ground, subjecting children to a higher dosage. As a result, they may suffer more severe consequences than adult members of the caravan.

Despite attempts to accommodate the large amount of migrants, Tijuana’s city government has since closed the shelter based in the Benito Juarez sports complex. On top of the city’s inability to fund the shelter, the closure was attributed to poor sanitary conditions. Officials reported several cases of respiratory infections and lice, as well as the shelter’s continued decline. Members of the caravan will be relocated.

Laboy said, “I feel so bad that the shelter has to be shut down. Shelters like this one help so many people, so I hope that they find a sufficient alternative.”