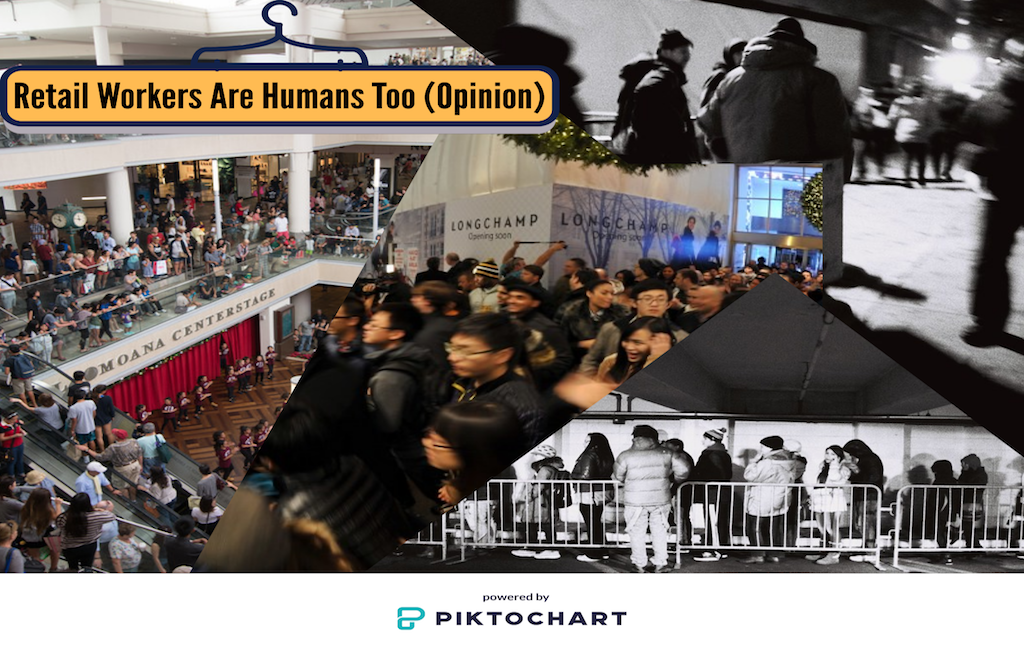 As the holidays are coming up, sales are more frequent in stores like Gap, Old Navy, and J.C. Penny. We as a society often get aggressive when it comes to a sale, and we have to remember that retail workers are human too. (Photo Credit: Sawyer Salgado/Piktochart)

As the holidays are coming up, sales are more frequent in stores like Gap, Old Navy, and J.C. Penny. We as a society often get aggressive when it comes to a sale, and we have to remember that retail workers are human too.

Retail Workers Are Humans Too (OPINION)

What do you see every commercial break during the holidays? Usually ads during the holiday season depict actors celebrating precious time together. The irony of these ads is that the employees at stores are often mistreated, and the competitive nature of bargain deals can sometimes provoke violence in consumers, like the Black Friday madness and safety risks in stores. According to Black Friday Death Count, there have been 12 deaths and over 117 injuries since 2006.

The history of Black Friday was to bring up the economy crisis crash in 1869. The evolution of the present shopping frenzy and the past economic solution begs the question, why do we have such an emphasis on bargain deals and how does that affect our ability to be compassionate humans to the workers that sell these items?

The story of #BlackFriday is darker than you might expect pic.twitter.com/GLNhCTSYvX

The most recent death, on November 23, 2018, of Yonis Barkhadle was generally ignored by people. The death occurred at 6:30pm, the height of shopping on a Friday night. As the shooting happened, the stores were still open, selling things.

Police sergeant Chris O’ Brien stated, “Obviously that’s a dangerous situation when guns are being discharged in a crowded location like that, but we don’t think there’s a heightened risk to the general public other than the fact that people who engage in this brazen behavior in a public place and the inherent danger that puts people in.”

Retail workers often get the worst of this treatment. Writer and former Sporting Goods worker Joseph Williams said his time as a retail worker was, “Hard work, yes; I certainly did my share working for a store that didn’t seem to value it all that much. I learned, however that loyalty is a malleable concept—and incredibly difficult to find these days, even at $10 an hour.”

The minimum wage is barely enough to survive off of. The bigger the corporations the less they are going to focus on their employees. The meaning of the individual and individuality for a worker diminishes because companies see the workers as replaceable.

since black friday/holiday time is coming back around this is just a friendly reminder to be polite to retail workers. most of us are just trying to do our job and make this holiday szn go as smoothly as possible!!

For the first time, Walmart’s plan is to pay the existing workers overtime and hire less seasonal retail workers. This would give the company a more efficient financial plan, in which they would be spending less money hiring new people and training them. This also places benefits in employees who are loyal to the companies, and who want to earn more to provide for their families they are working for during the holiday season.