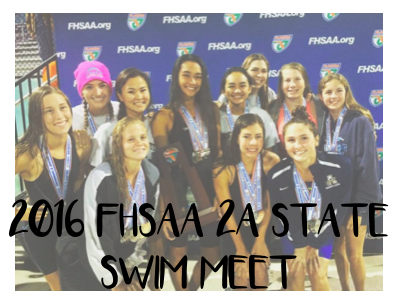 Senior Lara Lontoc ushers future swimmers of the Academy to, “Just remember it. When I went into Freshman year I wanted to make sure I would remember it for my Senior year so I could look back and think about these four years I’ve been on this team. It’s been four of the best years of my life. I’m so happy. You have to cherish it because there is nothing else like this that they’ll ever have.”

Academy Swims To A 2A State Runner Up Title

The Academy of the Holy Names swimmers and divers continue to destroy the competition at the 2016 FHSAA 2A State Swim Meet. Traveling all the way to Stewart, Florida and staying for the three-day meet, from November 11-13, the swimmers prepare to fully show their talent and hard work they put throughout this past swim season.

Academy wins its 9th straight district title, receiving a 666 score over second place Robinson receiving 393 points. Afterward, Academy makes its way to Regionals, held at the Clearwater Long Center, bringing certain swimmers to the 2A State Championship meet to show the state that they will dominate. 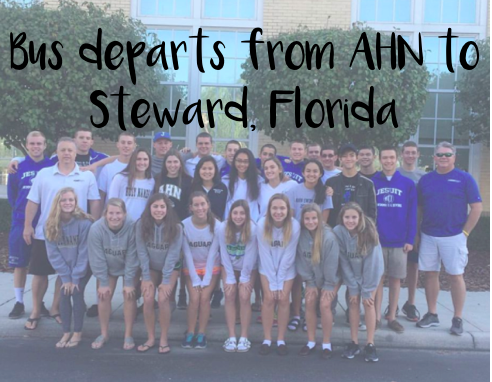 Gallery|8 Photos
It is a 3 hour ride from Academy to Stewart, Florida. Photo Credit: Gabby Delp (used with permission)

Beginning the meet were Preliminaries. Preliminaries are the meet before finals that sifts through all the swimmers who made it to the States meet to get the top eight fastest swimmers of the meet to compete for finals. This meet does not help any teams to gain points, but to just cut down the numbers of swimmers, which is the hardest part of the meet.

Swimmer and Junior, Lauren Sellers comments, “Prelims was definitely the hardest part of the meet because of the nerves. No one was sure how they’d do and I was really focussed on setting myself up to make top sixteen so I could win points for the team. “

Sellers continues, “Ever since my eighth-grade year, I’ve been eyeing Kelly Hugg’s record. After dropping a lot of time my sophomore year, it actually seemed possible. I’m a little nervous that I didn’t make it this year, but I know I have something to work towards next year”.

Finals were by far one of the most energetic and high-intensity moments of the three-day weekend. With the top eight swimmers in the state competing for the State Title, the pressure was high on the swimmers.

Swimmer and Senior, Lara Lontoc, comments, “We are seated pretty well in the relays and I’m hoping it all pans out”

The most anticipated and last event in the meet was the 400 free relay which determined whether or not the Academy swim team will make it to second place overall. With all of the spectators out of the stands and in front of the lanes to get a better look at the event to cheer their swimmers on, the pressure was high.

Swimmer and Junior, Gabby Delp, exclaims, “I thought I would be more nervous than I am, but I’m actually more excited than nervous.”

But in the end, the turnout was great for the Academy swim team when their strategy worked and they won 2A State Runner-Up trophy with 159 points. The last time the team won State Runner Up was in 1976, 40 years ago. What made everyone very surprised was the fact that the Academy swim team won without a single individual score in the top eight. They got the score by stacking the three relay teams including, Lara Lontoc, Bella Kirkpatrick, Gabby Delp, Katie Taulbee, and Sierra Wills. Getting 2nd place in the 200 free relay (1:38:99) and the 400 free relay (3:39:21) and placing third in the 200 medley relay (1:51:05).

Senior, Anne Marie Yatsula closes, “I’ve been swimming for seven years…and there have been ups and downs during the seven years, but I’d say that this is one of the best years I’ve ever been swimming. And I’m just grateful that I got along with the ride.”