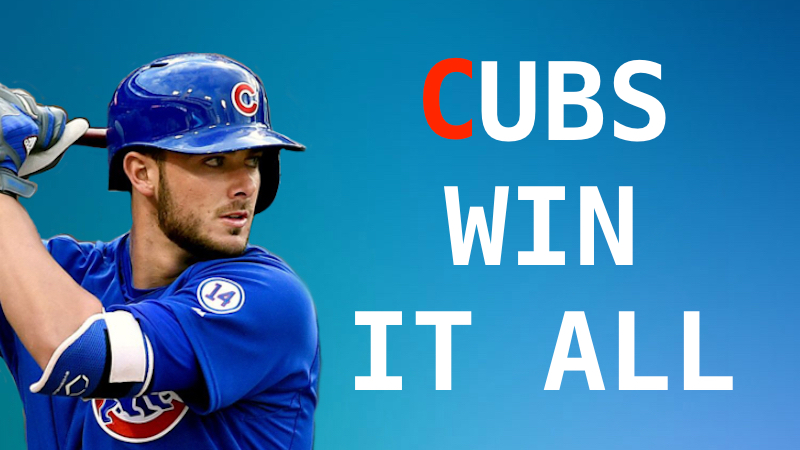 Kris Bryant told the world “Chicago! You all deserve this!” on his Instagram before Game One.

History has been made, folks! For the first time in 108 years the Chicago Cubs have won the World Series- the championship game for Major League Baseball. Led by MVP Kris Bryant, the Cubs won by one run in the 10th inning.

As it happened, the events of the games could not have been more suspenseful for Cubs fans. The Indians had early victories in the World Series and took three of the first four games. The Cubs came back in Game 5 and 6- forcing a Game 7 to proceed on Wednesday, November 2. For those of you who are unfamiliar with the World Series, the champion is called based off best of seven. This meant that both teams entered Game 7 at a tie- it was anybody’s game.

Early on the Cubs had a substantial lead on the Indians with a score of 1-5 at the top of the 5th inning. The Indians came back with two runs in the bottom of the 5th. By the 8th inning, the Cubs still had 3 run lead on the Indians. However, with the help of a wild pitch and home run by Indian player, Rajai Davis, the Indians were able to tie the game by the bottom of the 8th. No one scored in the 9th inning- resulting in extra innings (the baseball equivalent of overtime). As the game moved into the 10th inning, the Cubs were able to gain a two run advantage.

In the bottom of the 10th, the Indians got one additional run before the third out was called. The final score was Cubs 8, Indians 7.

This year, there was a few “firsts” for the World Series including Dexter Fowler becoming the  first player to ever hit a lead-off home run in a World Series Game 7.

Overall, fans are happy for the end of the Cubs’ 108 year “drought” and many showed their support for the winning team by posting messages on social media.

President Barack Obama, a Chicago native, tweeted on Wednesday to congratulate the team.

It happened: @Cubs win World Series. That's change even this South Sider can believe in. Want to come to the White House before I leave?

The Hamilton team went above and beyond to show their support for the Cubs at the end of Wednesday’s performance by singing “Go Cubs Go” with the audience.

Traditionally, the winning team has a parade thrown in their honor. This year’s parade was held on Friday, November 4 in downtown Chicago. It went from Michigan Avenue and Oak Street and all the way down to Grant Park.

Many Academy students were trilled with the results of the game. Senior Mary Kate Magyar posted on Facebook “My parents thought they would never see them win it in their lifetimes and yet they just won 8-7 in the 10th inning. Completely UNBELIEVABLE.” Let’s hope it doesn’t take another 108 years for them to win again.