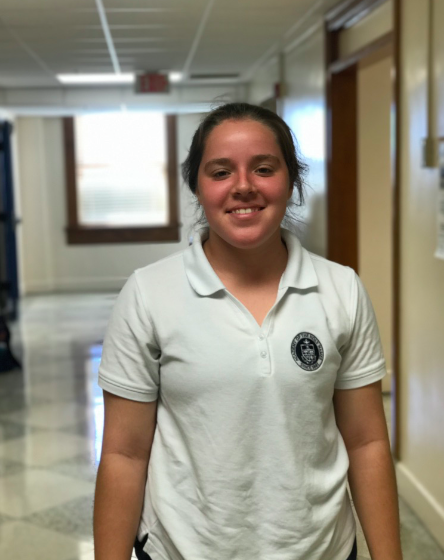 Lindsey Perez (‘18) has been playing on Academy’s Varsity basketball team since arriving her freshman year in August 2015. As a starting player on her team, Perez also manages extracurriculars, honors societies, AP courses, and college applications. Within the chaos of her senior year, Perez has set a goal for herself this upcoming basketball season to score a total of 1000 points.

“Freshman year, both Lindsey and I were placed on the Varsity team, which was really intimidating. While I hardly played that year, Lindsey always played and I admired her game and her courage. Each year she has continued to progress,” says Kayla Eckermann (‘18)

Achona: How long have you been playing basketball?

Perez: “I’ve been playing basketball since 7th grade. I started off by playing club basketball, and when I arrived to Academy freshman year, I joined the basketball team.”

A: What made you want to set this goal?

P: “Coming into high school, I never thought I would reach this goal, and I never even planned on setting it. It was only after my freshman season that I thought getting 1000 points was realistic. I wanted to set this goal because it was a challenge that I was willing to overcome.”

A: How are you working to accomplish it?

P: “To reach my goal, I have to work during the off-season and come into the gym to keep practicing.”

P: “My favorite parts about playing basketball are my teammates and the feeling I get during games. I love the feeling of zoning everything out and only having to focus on the game that I’m playing.”

A: What are you most looking forward to about your last season of basketball?

P: “I’m looking forward to hopefully getting past districts this year and possibly winning the district championship.”