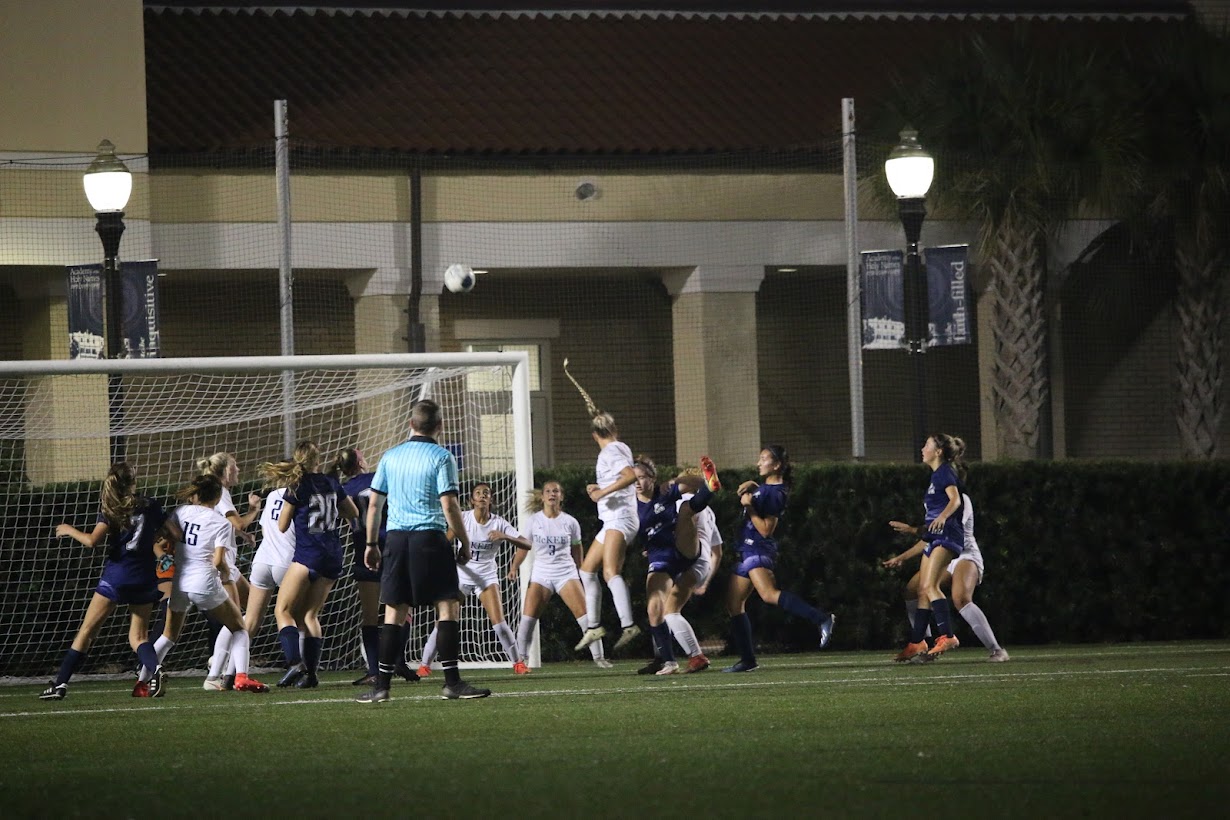 Mia Fairchild (’23) says, “This season was a great run for us, we worked really great together and I had the best time playing soccer with this group. I am so proud of how far we made it this year and am glad that we were able to bring home two trophies.” (Photo Credit: Allie Pramberger)

Mia Fairchild (’23) says, “This season was a great run for us, we worked really great together and I had the best time playing soccer with this group. I am so proud of how far we made it this year and am glad that we were able to bring home two trophies.”

On Friday, February 18, 2022, the Academy of the Holy Names Women’s Varsity Soccer Team attended the state semi-final match for the Florida 4A class. The team made the drive to American Heritage in Delray Beach to face their opponent on Friday afternoon.

After the long drive, the team was anxious to get on the field. The Jags, who were top seed in their region during the first legs of tournament play, had previously been able to host all home games in the playoffs. Adapting to playing on an away field was key for the semi-final match. After warming-up, the starting eleven took the field and began what quickly turned into a defensive game against American Heritage. The game began fast and there was great energy on both sides of the field. Fans from the home school were rowdy and excited, cheering loudly for the opposition. The Jaguars went down 0-2 by the end of the first half due to sharp, long-ball shots from American Heritage. At half-time, the coaches and captains of AHN encouraged their players to maintain high energy and to exploit any pockets of space they were able to find in order to get opportunities in front of the net.

At the final whistle, American Heritage had gone up four goals rendering the Jaguars 2021-2022 season complete. From the start to the end of the game, AHN maintained a very high work rate, positive communication and resiliency. Despite the tough loss after several close and triumphant games, the team is proud of their work this year on the field.

Last Season, AHN varsity soccer did not advance past districts in a devastating loss against Berkley Prep at Tampa Catholic High School. However, this year, the team was able to go on a winning streak, not losing a game since coming back together from winter break. The winning rate of the team brought them two trophies for districts and regionals, both of which were earned at their home field. The team concluded the 2021-2022 season ranked 3rd in the state for the 4A class, 26th in the state of Florida overall, and 76th nationally against all other high school women’s soccer teams in the United States.

Brynn Wilary (‘23) said, “I think we went so far this year because the team believed and trusted in each other. Everyone got along well, and I think that showed on the field. My favorite part about the team is that we helped to bring each other up and had each other’s backs. Everyone wanted to succeed.”