Statements Regarding Fidel Castro from a Cuban’s Perspective 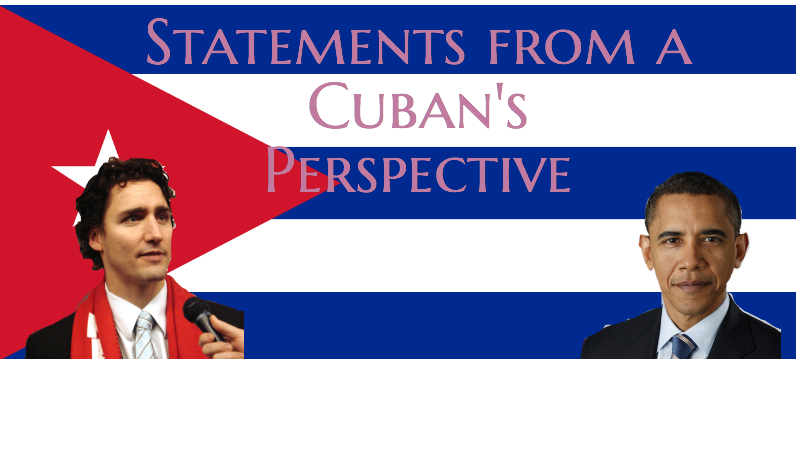 Irene Alvarez says, “I spent my childhood hearing the atrocities Fidel Castro had done. Always seeing my Grandparents suffering every time a family member passed away and they did not have the freedom to mourn with their families or pay respects. I have heard the countless stories from so many which started with “When Castro is gone and we can go back……”. My Grandfather unfortunately passed away waiting for that day. Most of my family is in Cuba and I have never met them. I’ve never seen the places which my Grandparents so fondly have spoken to me about. I will never know “their” Cuba. All because of one man that convinced a country and a world that his ideals would revolutionize a Country.”

“Viva Cuba Libre”- a statement heard all around after the long awaited death of Cuba’s dictator, Fidel Castro. As usual, politicians around the world released statements about the death of the tyrant leader of Cuba.  After knowing the history of Castro’s work, one would assume politicians would release similar statements that note what kind of person Castro truly was. I was shocked, however, to find the number of heartfelt statements released about the Cuban dictator.

Joined with millions, especially in the state of Florida, I am an American with Cuban blood. Proceeding the news of his death, President Obama released a shockingly heartfelt statement referring to the enormous impact Castro had on the world and the people around him. After the release of this statement, I realized, I shouldn’t have expected more from someone who attended a friendly baseball game with Castro’s brother, Raul. Rather than attending the funeral himself, President Obama is sending White House aide to attend the funeral. If we are a nation built on the foundation of freedom, why should representative from the United States of America pay homage to a man who stripped his country of everything they had?

Roger Alvarez, a first generation Cuban-American, believes one must comprehend Castro’s history to understand why Obama has angered so many. He reminisces on events that his family ran into while attempting to escape Cuba and says his cousin, who was two at the time, was being shot at while leaving the shores of the island.

Alvarez refers to Obama’s relationship with the Castro’s to be a “slap in the face” to all those who have died seeking freedom, saying, “I believe it is nothing short of appalling in what I have seen coming from Obama and his administration in regards to what he has done with the Castro’s. And I ask, would we see it “okay” to have this sort of relationship with Hitler, Stalin, Hussein, etc….? The Castros are no different than any other brutal dictators  that murder in the masses to push their agenda. “

Next, we have Trudeau’s statement. The statement that praises Castro and recognizes him as a “larger than life leader” and as someone who is recognized by “his tremendous dedication and love for the Cuban people.” This makes me wonder, is stripping your country’s people of their lives, what they know and love, is that a sign of love and dedication? To top it off, Trudeau spoke highly of Castro’s supposed impact on healthcare and education. Meanwhile, the hospitals that Castro supposedly “impacted” have no electricity and lack sanitation. Proceeding his statement, Trudeau deservingly was mocked all over social media for his outrageous comments of this so-called “tremendous leader.” Trudeau later announced that because of scheduling conflicts, he would not be attending Castro’s funeral, however  similar to the United States, a representative from Canada will be sent to pay respects, that in the opinion of many, are extremely undeserving.

Irene Alvarez, a first generation Cuban-American, says Trudeau’s statement infuriated her since Castro was the cause of her family losing everything in search for freedom.

She said, “ I would challenge Trudeau and his family to leave their life in Canada and move to the countryside of Cuba with no ‘special’ accommodations.  To live just like my family does in Cuba. To lose his freedom of speech because at every block there is a ‘snitch’ for the government which will report if you killed a chicken to feed your family.   Which may be considered an act against the revolution and require jail time. I’m sure his language would change at that point.”

It is difficult reading Justin Trudeau's statement on Castro without being sickened by his worship of an evil man.

As a Cuban-American, I am insulted because government leaders are paying respects to a man that stripped my family and many others of their lives. I am offended because the officials that lead a free country are sending condolences to a man that has restricted me from meeting my own family. I am hurt that these people would respect a monster who drove some of my family from their homes. After leaving over fifty years ago, my family has awaited to see a free Cuba, however, because of Castro, that has yet to happen. All in all, I am angry because Fidel Castro is receiving a disgusting level of respect for destroying a country many once called home.