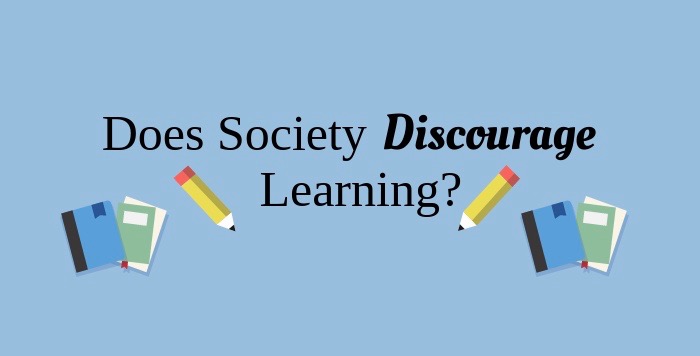 According to the Census Bureau, in 2016, 77.2 million were enrolled in schools throughout the United States. ((Photo Credit: Juliana Ferrie/Achona Online/Piktochart))

According to the Census Bureau, in 2016, 77.2 million were enrolled in schools throughout the United States.

Throughout our lives, school plays a major role in the development of our mindsets as people. However, despite the immense amount of time we as a society dedicate to education, there still seems to be an inherent stigma associated with learning: students dread attending school, television shows unjustly portray school negatively, and students seek to find the easy way out for each assignment. With these things in mind, it is apparent that as a whole, society influences students of all ages to view education as a nuisance rather than as something that is beneficial.

Stella Mele (’21) said, “A lot of the media focuses on negative things about schools and teachers. It never focuses on anything positive like the achievements of students and teachers. Shows never demonstrate what’s actually going on at schools, so I don’t think they’re accurate.”

We should never forget that #learning is FUN! https://t.co/vIkLX284E9

Typically, when the media portrays school environments, it depicts an institution riddled with stereotypes and adversity. In this media-dominated world, students look to these influences in order to develop their own personal perspectives and beliefs. Consequently, when something, such as a school, plays a major role in a young person’s life and is portrayed negatively, their overall outlook on that concept changes.

Specifically, television shows and various movies illustrate high school as four years dedicated more to social events than education itself. Those shows that do occur within the walls of a school setting all follow the same stereotypical pattern: the protagonist fears their school bully, cannot see eye to eye with a certain teacher, and pursues the attention of their crush. While this might be the experience of some high school students, it is inaccurate to paint this generalization as universal. In the midst of all this, not to mention, there is very little focus on the true importance of taking your education seriously.

This portrayal of schooling is apparent within the movie “Ferris Bueller’s Day Off,” which follows main character Ferris Bueller, his best friend, and his girlfriend as they decide to skip school. Throughout the show, Bueller speaks directly to the audience, giving them advice on how they too can get away with skipping school, feeding into society’s preconceived ideas about education.

To add to the effects of these negative stereotypes, the media depicts those who desire to learn as “nerds” or “geeks,” discouraging children from wanting to be openly curious about concepts covered in school. Students are also branded this way when they excel in school, creating an unending cycle of negativity.

Madison Chandler (’19) said, “I think that the media portrays school to be more about the drama than actually learning. The characters in television shows focus more on their looks and other things because school is generally deemed ‘uncool,’ so if you like school, you’re automatically branded as a ‘nerd.'”

When students are exposed to this picture of school repeatedly, they begin to accept it as reality, and as a result, knowledge is no longer seen as an incentive for school attendance. Although it is okay to want to experience some part of this image, as a whole, it is not entirely practical. School provides a foundation that contributes immensely to the development of a person, allowing students to acquire information while promoting confidence, socialization, and teamwork. However, if students adopt a pessimistic view of school, their education will not benefit them.

Furthermore, the characterization of teachers by various television personas is detrimental to a student’s perspective of school. Teachers are often seen as antagonists in the media, and consequently, students see school authority figures as against them rather than for them, discouraging students from making the most of their schooling.

English teacher Virginia Pendleton said, “I think that the media’s negative portrayal of teachers can lend itself to perpetuating stereotypes amongst students. Fortunately, I think most students have been blessed to have at least one good teacher, hopefully many, and subsequently realize that the stereotypes portrayed are just that: stereotypes. I don’t think negative stereotypes are indicative of my profession alone, but I think the stereotypes do harm my profession as a whole and demonstrate the lack of value placed on education in general—at least at the non-collegiate level. I think we need to ask ourselves why educators are so undervalued and portrayed negatively. Is there a correlation?”

On the internet, for example, YouTuber Jake Paul’s song “My Teachers” conveyed this hurtful message to his 17 million subscribers. The song expressed Paul’s feelings that the subjects covered in school by teachers are useless. Through the release of his song, Paul discredits not only the importance of education, but also the hard-work and dedication of teachers everywhere.

Maria Galvez (’21) said, “It wasn’t fair of Jake Paul to release the song because it could negatively influence the kids who watch him. However, it is his perspective on his own schooling, so he was allowed to release it.”

i was gonna say i cant believe jake paul tried to diss teachers by saying they never taught him how to get a DM back or buy a lambo cash but i can. i can believe it.

Overall, as a society, we need to learn how to promote education rather than diminish its importance. We must recognize that the school environment depicted through the media lacks accuracy and can have negative effects on the mindsets of students. The work of educators everywhere is vital to the success of their students, as well as their futures. On that note, society as a whole should encourage learning instead of promoting it only as something negative.