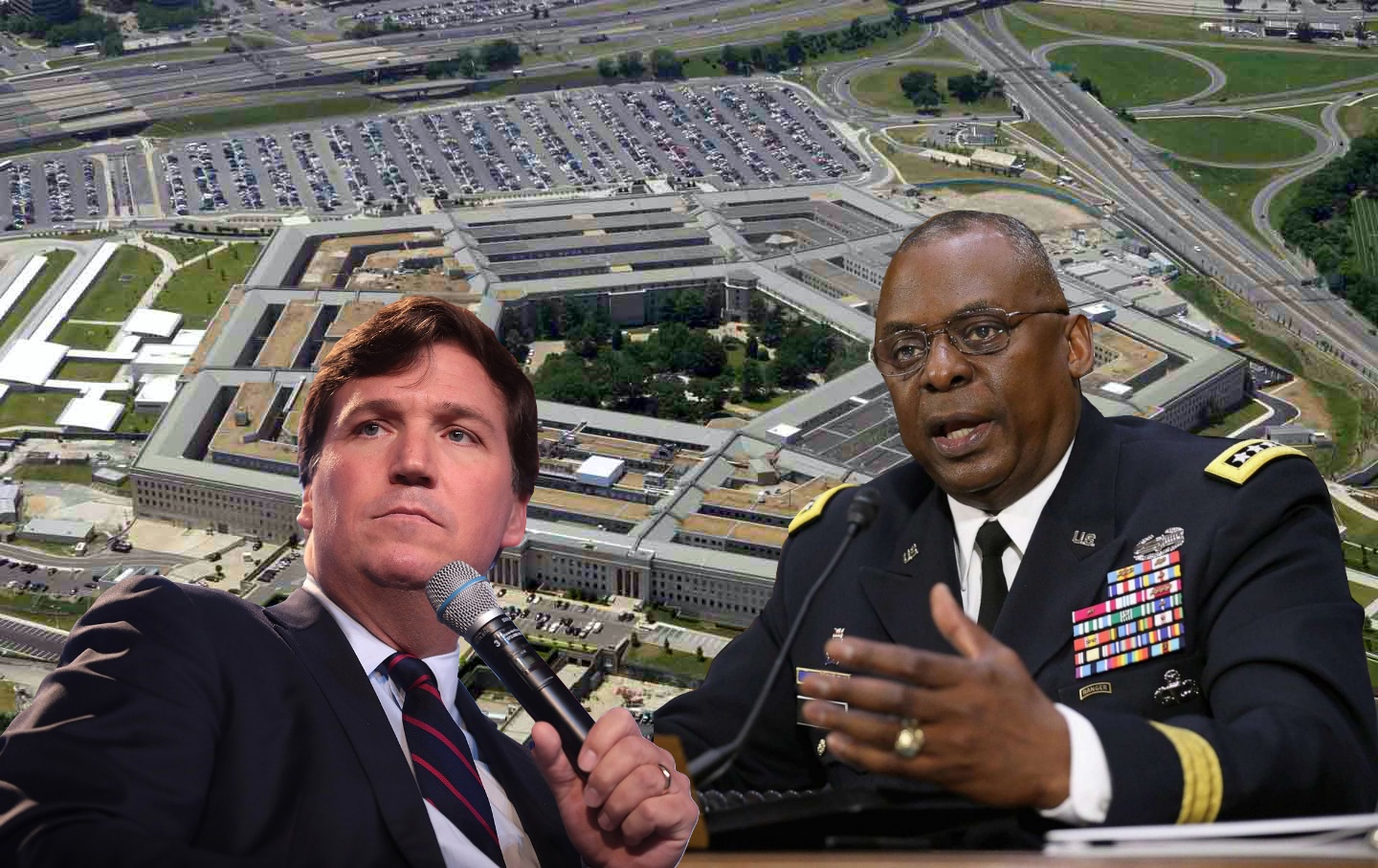 Fox News Broadcaster Tucker Carlson was met with backlash from the Pentagon over a series of comments he made about women in the military. ((Photo Credit: Reuters/Gage Skidmore/Creative Commons/Chip Somodevilla/Katia Huddleston/Photoscape))

Fox News Broadcaster Tucker Carlson was met with backlash from the Pentagon over a series of comments he made about women in the military.

Carlson compared China’s new plan to encourage masculinity with Biden’s announcement to commemorate women in the military. “So we’ve got new hairstyles and maternity flight suits. Pregnant women are going to fight our wars,” said Carlson. “It’s a mockery of the U.S. military.” His comments sparked outrage and support from the left and right.

However, the most concerning thing about the situation isn’t the controversy it created; it’s that the Pentagon itself responded to Carlson.

In an off-camera press briefing, Pentagon Press Secretary John F. Kirby said, “And finally, I’d like to briefly address some recent comments made by the host of a popular cable show about who serves in the military, and what that service means…. What we absolutely won’t do is take personnel advice from a talk show host or the Chinese military. Now maybe those folks feel like they have something to prove; that’s on them.”

The first amendment of the United States states, “Congress shall make no law respecting an establishment of religion, or prohibiting the free exercise thereof; or abridging the freedom of speech, or of the press; or the right of the people peaceably to assemble, and to petition the Government for a redress of grievances.” Therefore, journalists have the right to question the government and military of its actions without legal retribution.

No, Congress has not passed any law that impedes journalists’ rights to comment on the actions of the U.S. military. But, it is worrying that the U.S. Department of Defense has taken it upon itself to criticize journalists. After all, it’s the strength of the U.S. military to enforce the legal system that incentivizes citizens to follow such laws at all.

“I think that he [Carlson] definitely shouldn’t have said anything like that, but people in journalism shouldn’t be criticized by the government,” said Erin Hendrickson (‘22).

Or you could focus on, you know, making the force as effective as require in order to defend the Constitution https://t.co/Ijmc8VKsh5

The President of the United States is the commander of the armed forces and Congress has the ultimate power to declare war and raise and support those armed forces. The fact that the U.S. Department of Defense is passing its own judgments on a journalist is incredibly disconcerting. It leaves the question of just how far the Pentagon will take its critiques and whether or not it will begin deciding for itself if someone’s comments are constitutional.

In 1832, President Andrew Jackson abused the power of the military to ignore a Supreme Court ruling. Without the military, the Supreme Court had virtually no ability to uphold Congress’s laws and the constitution itself. The result was what would become known as the Trail of Tears, one of the greatest human rights violations in American history. Although it was not the commander-in-chief who told the Pentagon to call Carlson out, the event is a reflection of just what can happen when the military takes it upon itself to assert what it believes to be right.

If the Pentagon continues to call out journalists for their remarks, foreign incidents like Simon Ostrovsky’s (a Russian-American journalist who was arrested in Sloviansk, Ukraine under suspicion of being a right sector spy) don’t seem too distant in the U.S.’s future. In Ostrovsky’s case, the self-proclaimed mayor had previously warned the journalists in Sloviansk that “if they [the journalists] were caught lying that they would be expelled from the city and that they [the mayor’s government] would be watching our work and that they’d taken our names down and that they know who we are and so we’d better be careful what we say.”

Ostrovsky was released after allegedly being beaten and interrogated by the pro-Russia forces that had overtaken the Sloviansk government. His arrest in Ukraine shows how a government deeming journalists’ reporting to be lies or “ridiculous,” as the Pentagon declared Carlson’s comments, could lead to the unjust imprisonment and unlawful treatment of prisoners like that of Ostrovsky.

While some harmful or violent speech is not protected under the first amendment, Carlson’s comments do not qualify as such. Therefore, the Pentagon has no legal or constitutional obligation to keep Carlson from saying what he pleases, no matter the negative connotation it believes his words carry.