Sophomores Prove the Existence of God 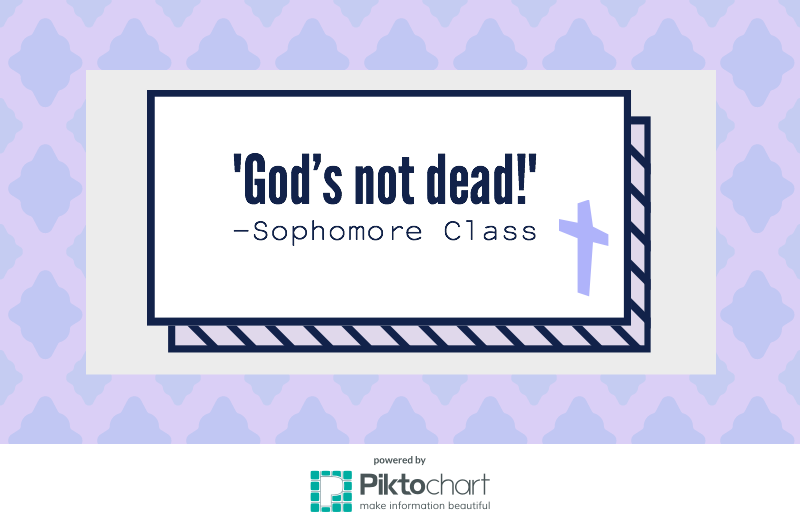 The Sophomore Class has been using St. Thomas Aquinas’ proofs to prove the existence of God.

Over the past two weeks, the Sophomore Class has been exploring the extent of their faith during their theology classes. Their main focus has been St. Thomas Aquinas’ Five Proofs for the Existence of God, which is found within his work Summa Theologica. St. Thomas Aquinas, the patron saint of students and universities, was a member of the Dominican Order.

A post shared by Diocese of St. Petersburg (@diostpete)

Each class, taught by theology teacher Felix Kalinowski, watched God’s Not Dead, a Christian drama in which Josh, a philosophy student, is challenged by his atheist professor to prove the existence of God. Josh refuses to deny God, and he proceeds to try to convince his class that God is truly alive.

Sophomore Madison Rooth expresses, “I thought God’s Not Dead was sad, but it had a good message. It made me want to strive to be a better person and to defend God more often.”

In order to elaborate on the concepts they were introduced to in the movie, the sophomores were divided into five different groups per class. Each group was given a specific proof that they were supposed to be able to explain through a 10-15 minute presentation. The girls were able to choose any form of media they wanted to present their project.

Sophomore Chanita Belcher explains, “I think it is very interesting to try to explain how and why God is real. Since we were all raised in the faith, it is harder to know and understand all the reasons for why God exists.”

All five of St. Thomas Aquinas’s proofs challenged the girls. Because each concept is so complex, the sophomores spent a lot of time and effort preparing their presentations for Kalinowski’s class.

For example, sophomore Mckenzie Diaz explains her group’s assigned proof: “My group was assigned the third proof, which is Possibility and Necessity. This proof explains that there had to be one necessary being, which is God, in the beginning to make everything possible or else there would be nothing around us.”

In addition to the presentation, Kalinowski challenged each individual group by questioning them about what they presented. Kalinowski asked questions from an atheist’s perspective in order to test the extent of the group’s knowledge about their proof. One of the questions, which is considered the hardest one of all, asks why there is evil in the world if there is a God.

Sophomore Caitlyn Asher explains, “I feel that everything has a positive and a negative effect. Some people only see the negative side. Evil in the world happens to benefit a single person or others. For example, a woman [named Amy]  in God’s Not Dead was diagnosed with cancer. Although most people would only see that she might die, which is the bad side, she became closer to God through the ordeal.”

Kalinowski aims to teach his students the importance of thinking outside of the box. By taking a more philosophical approach, his students are able to obtain a deeper understanding of who God is.

As Kalinowski elaborates, “You might believe that there is a God in your heart, but you have to believe in God in your head as well. It [the project] connects your heart to your head. It gives us ammunition against those who do not believe.”

Dear God, thank you for
today, yesterday, tomorrow
and forever, I'm thankful for
my life.

Overall, the project offered each member of the Sophomore Class intellectual challenges in order to help prove their faith. After hearing their classmates discuss each of the five proofs, the sophomores were able to gain a greater understanding of God and His role in their lives.