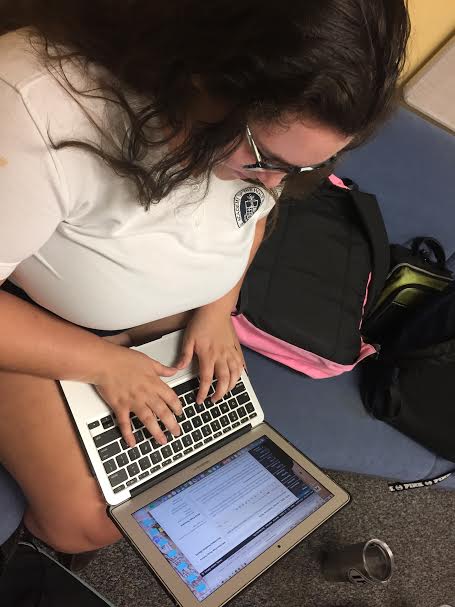 Kendall Perez, senior, jokes that, “online investigating is one of my favorite hobbies.”

Investigating, especially via social media, might be unusual to some people, but to AHN girls, it’s a fun hobby. From cute guys to favorite teachers’ kids, AHN girls are using their smarts to dig up what they want. Here  is a qlist of the craziest things girls have dug up:

Upon returning from a Student Council camp, Seniors Allison Wehle, Grace Neal, and Jenna WIley, decided to kill time before a flight by finding their favorite counselor on social media. Despite not knowing his name, the seniors successfully found him in a short amount of time.

Wiley recalls, “We had a list of counselor names and just picked a random one that we felt he could be.” She adds, “Then we looked him up on Twitter, Instagram, and Facebook and found him and we all screamed in the airport. Everyone thought we were crazy.”

Honardo laughs, sharing “We went in deep and found his troupe, school, and his performances on YouTube!”

Senior Ashley Lambert shares a story about her older sister, Kelly Lambert, a graduate of AHN who noticed a cute guy at church one day.

Lambert shares,“Knowing nothing about him except that he went to our church, she found his Facebook in less than an hour.”

Senior Chloe Paman once let her investigative skills go too far. One day, when checking up on her old middle school friends’ social media accounts, Paman noticed an interesting account. After a while of looking through that person’s Instagram account, Paman found herself in a funny situation.

Paman laughs while recalling, “I was at the dentist and I see someone vaguely familiar. Lo and behold, it was the person I found and they were sitting next to their mom.”

These are just a few examples of AHN’s superior detective skills. Investigating is definitely a favorite, and hilarious hobby that many AHN girls can bond over.