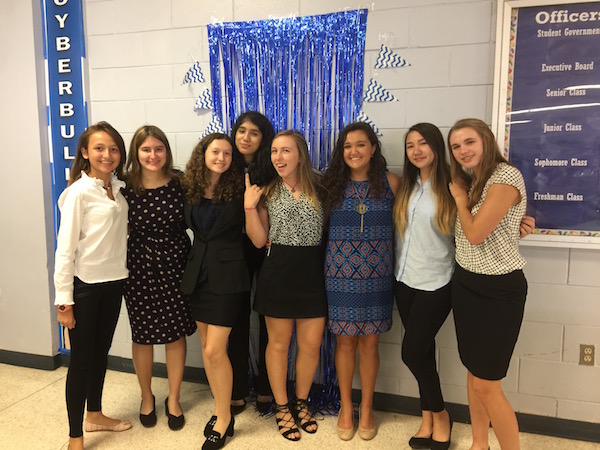 Members of Academy’s Speech and Debate club competed in a wide range of events on Saturday.

Saturday, October 1, 2016, the speech and debate year will begin for Academy’s Forensic Club. This first tournament of the school year will be held at King High School, and eight members of Academy’s debate club will attend. The members are eager to compete, and quickly took up the opportunity to fulfill their club motto: “Ever argued with an Academy girl?”

Academy’s Forensic Club/League currently consists of a total of 22 members and is a club that teaches members how to improve their speaking skills, as well as their confidence in front of an audience. Due to the club’s need for time, it has been recently changed from a blue club to a gold club, and has meetings every Thursday.

Why do you participate in speech and debate? #SparkLeaders pic.twitter.com/0A4Y6ggw1m

By signing up for this club, each member commits to attending at least three all-day tournaments at various host high schools, as well as ample time to prepare for each event that they compete in. Most tournaments require that the students arrive at the school around 7:45 a.m, and the tournaments often do not end until 5:00 p.m. Before a competition, a student has the opportunity to choose from a wide range of events, which includes interpretative and debate events.

Interpretative events focus on the different aspects of speech. For example, students have the option to compete in Original Oratory, which requires them to not only write their own speech but also to memorize it in its entirety.

Debate events include six separate sub-categories. Each category requires a student to argue about a designated topic. For example, within Congressional debates, students model their debate off of the procedure of the U.S. Congress. During each session, students debate legislation proposed by various high schools.

Sophomore Audrey Gabbard explains, “I usually compete in Humorous Interpretation or Dramatic Interpretation, which are both within the interpretative events category. I like competing in my event because it’s not just memorizing speeches that are well-known. It is a way for me to express myself through art humorously and/or dramatically.”

Sophomore and first-year member Sydney Lowman signed up to perform an Oral Interpretation of literature. This interpretative event requires the competitor to perform a poem and a prose piece. The prose piece is an excerpt from a book that relates to the student’s poetry piece.

Lowman states, “The first piece I will perform [the poem] is a slightly twisted take on the Cinderella story. My prose piece is about a lottery, but it is very creepy. I consider this category to be an event that is preparing me to go into the more challenging parts of speech and debate.”

The sophomores are not the only ones who will be showing off their speaking skills on Saturday. Freshmen members are not afraid to put themselves out there and have signed up for their first tournament without hesitation. Freshman Mei Lamison is eager to compete in her first tournament, and will also be participating in Oral Interpretation.

After a long day, the results from the tournament have been announced. Each girl contemplates their personal experiences based on their individual ballots filled out by the judges.

Lamison reflects on her past results, “It was very interesting to hear different people’s viewpoints on a variety of issues. I felt nervous when I was competing, but in the end, I felt confident.”

If competing isn’t their forte, some club members chose to observe the tournament in order to get an idea of the different events. Observing allows for interested members to obtain an understanding of the event they are interested in and opens their minds to possible discussion topics.

Freshman Sarah Munera states, “Observing was a lot of  fun and I learned a lot. I now know how to be well prepared for when I compete.”

Overall, the tournament at King High School is a great experience for new and past members alike to learn how each part of The National Forensic League works. Academy students leave the competition with an understanding of how they can improve their own techniques in future tournaments. Until then, the Forensic Club will be preparing for the next tournament, which is at Southeast High School on October 15.