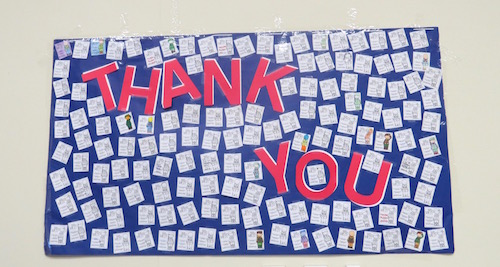 Academy students wrote thank you notes to military men and women and displayed them at the assembly. Credit: Emily Hoerbelt/Achona Online

On Friday, November 11, America celebrated all of the men and women who put their lives on the line and have served in the armed forces. This national holiday originated in 1919, on the one year anniversary of the end of World War I. AHN honored these special heroes at an assembly Friday morning.

Khan states, “I was honored to give the speech because America has always done a laudable job acknowledging our patriots and understanding what a blessing it is to live in a free country. So it meant a lot to take part in this event and express my gratitude toward our veterans.”

The Quarter Notes sang “The National Anthem”,”The Battle Hymn of the Republic”, and “America the Beautiful” throughout the service.

Senior member of Quarter Notes Khalea Armstrong’s mom and stepdad are retired from the Air Force and her cousin is currently a chef in the army.

While recalling her performance Armstrong stated, “In ‘America the Beautiful’, the line ‘and crown thy good with brotherhood from sea to shining sea’ comforts me in knowing that my mother and stepfather had someone over there comforting them even though they couldn’t be with family.”

Academy continues to honor and pray for all active and retired military men and women.