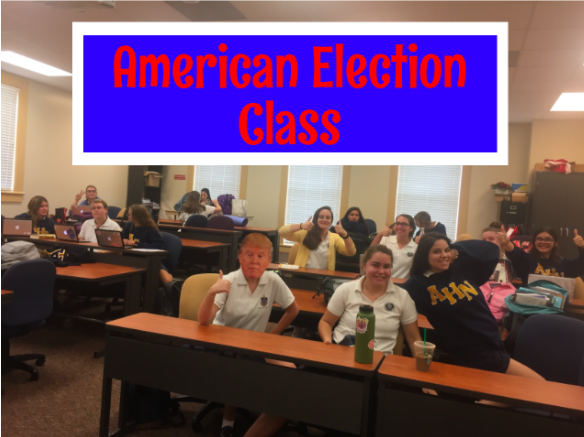 Senior Kate Scanlan shares, “I like elections class because we discuss what is happening in the election at the current time. The class is even more interesting because of who the democratic and republican presidential candidates are. Now with the election over, Overall, I really love the class because of Mrs. Chase. We have very few out of class assignments, and I never feel stressed for the class. I like that especially for the beginning of Senior year!”

Social Studies teacher, Beth Chase, brought a new class to AHN this year that specifically revolves around the 2016 election. The election class is offered to any grade level and is only held first semester this year. The class analyzes campaign strategies from the past and compares it to the current election.

Junior, Evan Greek shares, “It was interesting to compare past campaign videos to the ones today. The videos today were more focused on attacking the opponent.”

Another thing the class did this year was rewatch each debate. This led to intense class discussions as every student was allowed to have a respected opinion on the issue. Every student chose two states to be responsible for the entire semester. Once a week, a powerpoint would be presented by the student providing updates on politics in the given states.

Senior Jenna Maceovsky comments, “I liked watching the debates in class because it gave me more of a prospective on other student’s opinions on the issues.”

On election day, the class celebrated with a party, making sure they all had their “I Voted! AHN 2016” stickers on their shirt. Cookies, brownies and other goodies made the class event even more exciting.

Some students even got to vote in their first election this year. Senior Rachel McKenna shares, “It was super cool to be able to vote for the first time. When I went inside, they asked if I was a first time voter. After I told them that I was, the whole room cheered for me. I will never forget my first voting experience.”

This new class was even more exciting because of the very chaotic election this year. Overall, this class has been extremely enlightening.