Troupe 0846 Performs “The Butleress” at One Act Festival 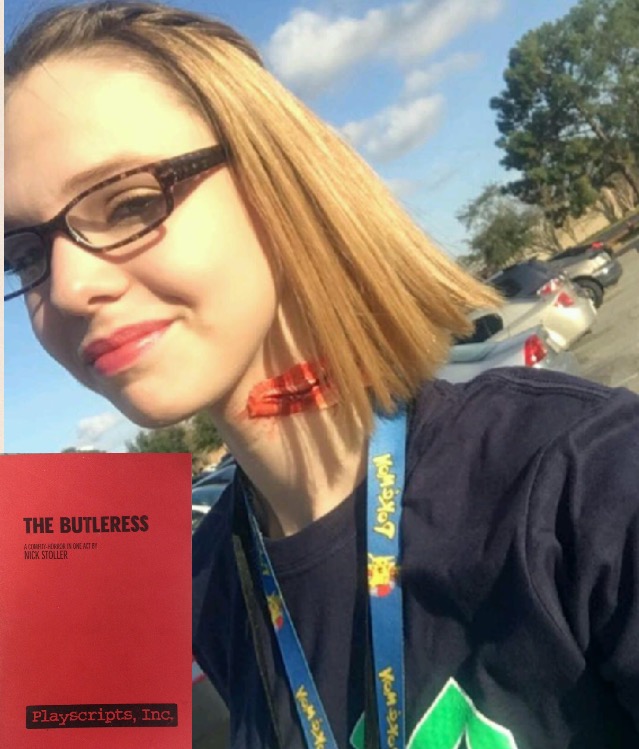 Credit: Sydney Sommer (used with permission). Nick Stoller, the writer of “The Butleress,” attended Harvard University and is now a screenwriter and director.

This past Wednesday, members from Academy’s Troupe 0846 competed in the district One Act Festival at USF. The One Act Festival consists of 30 minute plays, or one acts, performed by high schools within the district to receive awards and potentially move on to perform at States later in the year. This year Academy performed The Butleress written by Nick Stoller, where four women meet at a theater to rehearse an English murder-mystery play, but there is a twist: the play parallels real life as there is a madman on the loose. The four women are killed one by one while attempting to determine who the murder is.

Junior Nyla Jacobs said, “At first, we picked The Butleress because it was funny and seemed fun to perform, but then we quickly realized that it was difficult piece, because we had to play two different characters.”

Going in alphabetical order, The Butleress, was to be performed first. The girls loaded in their set and props into a 6’ by 9’ by 6’ box backstage, and scurried off to the dressing rooms. There, they had thirty minutes for costumes, hair, and makeup. With the tech in their booth five minutes before the curtain raised, the cast shook out their nervous energy, and performed.

Senior Sydney Sommer said, “I felt really engaged with the audience because of their reactive response, and it was by far our best performance.”

After the show, the cast and crew gathered in another room backstage to be critiqued by the judges. Sommer said, “It was really good to be critiqued as there were no major mistakes. He understood our rehearsal process and the problems that we faced.”

When asked about her first One Act experience, Junior Julia Barreto said, “It was really fun. I also felt that the tech aspect of the show was more involved, compared to Districts.”

Afterwards, the troupe took a relaxing seat in the audience to watch the other troupes perform. Senior Jhuztin Honrado said, “It’s fun to see other schools performing longer productions compared to the five minute IE pieces at Districts. You also have the opportunity to see new shows that you may have not of known of before.”

One Acts in the district are performed late fall every year, and Academy’s Troupe 0846 hopes to attend next year as well.