Coming up with costumes and themes for Spirit Week 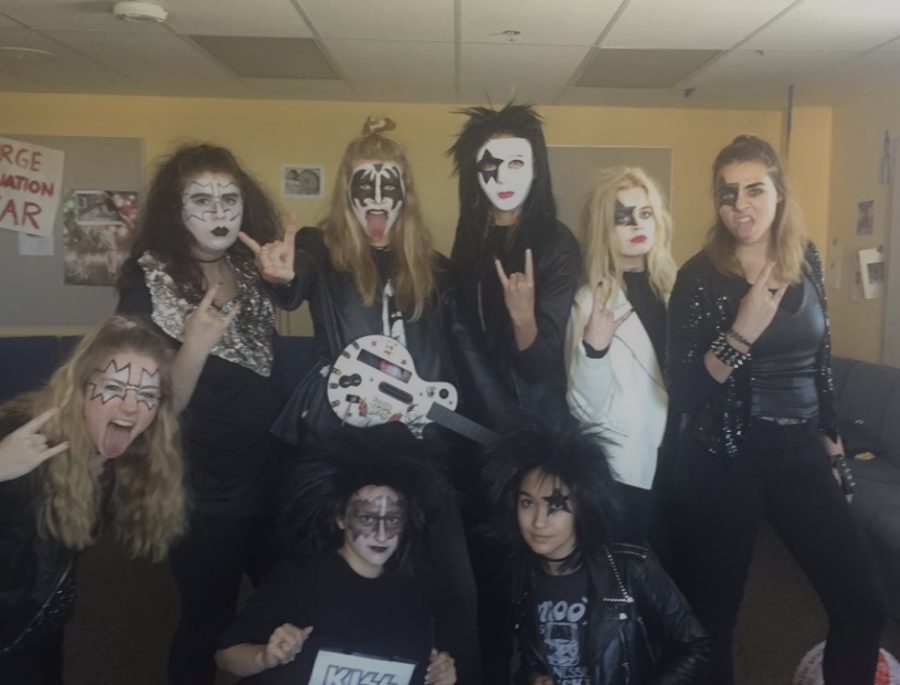 The seniors had the most fun dressing up as KISS because they felt like they were really in the band. Photo Credits: Camille Opp (used with permission)

The seniors had the theme “Halloween” which led to the movie The Purge. Students dressed up in regular clothes including sweatpants, hoodies, sweatshirts with masks and fake blood everywhere. People also wore their old graduation gowns as it went with “The Purge: Graduation Year.” The seniors set the scene for the pep rally by walking in with The Purge theme song.

The juniors had the theme “4th of July” which led to the juniors wearing all sorts of USA themed clothing and colors including Trump and Clinton masks, Patriotic people, etc. It started off with a junior posting on their class facebook page three ideas and asked the other students what they thought or if they had any other ideas. The juniors were filled with a lot of spirit and pride as they repped the USA theme.

The sophomores had the theme “New Years” which led to wearing all kinds of face paint, fun hats, glasses, etc. They felt like they couldn’t do much with the theme because there wasn’t much to do with it. But, the sophomores did a great job coming together as a grade and making the best with it by dressing up as much as they could.

The freshman had the theme “Groundhog Day” which led to the freshman homerooms splitting up between winter and spring clothing with Grace Orama dressing up the groundhog’s shadow. The freshman took their theme to the next level by thinking out of the box and using each homeroom as a piece for their theme.

The seniors had the theme “Music” which led to everyone in the grade dressing up as the band KISS. People wore all black while painting their face like the band. The seniors thought of the idea by talking about it on the class page and talking about exactly what they were wearing and how to do the makeup. Even though KISS is a band of four, the seniors looked like a band of 110 by mimicking the band members.

The juniors had the theme “Sports” which led to the grade dressing up as the “Wildcats” from High School Musical. Everyone either wore sweatpants, hoodies, jerseys, and other sports related clothing to mimic the Wildcats basketball team. The theme was decided on their class facebook wall which resulted with the Wildcats costumes. The juniors were filled with Wildcats spirit.

The sophomores had the theme “Films” which led to the grade dressing up as the 101 Dalmations. People dressed up like the dalmations by wearing white and black with spots on their face.

The freshman had the theme “Scholars” which led to the grade wearing college attire and graduation robes to represent being smart. Some people also wore accessories including glasses and ties. A person in the grade came up with the idea which led to people commenting what to wear and bring for the day.

The seniors represented “Gryffindor” throughout the day by wearing Gryffindor robes, scarfs, ties, and even dressing up as famous Harry Potter characters. Senior Olivia Valdes even brought in butterbeer in the morning to share with the class. The grade tailgated in the morning blasting Harry Potter and got into the Gryffindor spirit.

The juniors represented “Slytherin” by wearing all kinds of Slytherin robes, colors, characters, and famous Slytherin characters. The junior locker room is filled with green lights, posters, items, and even a disco ball that reflects on the walls.

The sophomores represented “Ravenclaw” by wearing Ravenclaw robes, blue facepaint, and all sorts of Ravenclaw items to match the theme. Many students walked around with books and glasses to represent the intelligence of Ravenclaw.

The freshman represented “Hufflepuff” by wearing all sorts of yellow, facepaint, socks, and even Hufflepuff robes. Since Hufflepuff isn’t one of the most popular Harry Potter houses, students were able to put outfits together by printing and putting the logo on black robes or just wear the color yellow.