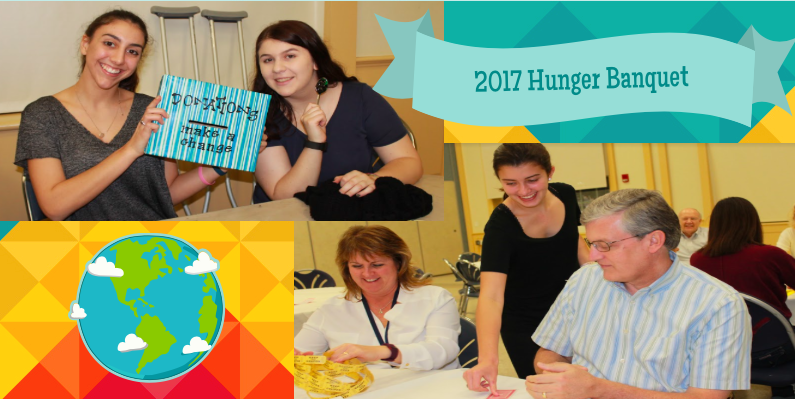 Interact Club’s annual Hunger Banquet successfully raised awareness about the effects world hunger on January 26, 2017. By providing a first, second, and third world meal, the Hunger Banquet aims to open the AHN communities’ eyes to the effect of poverty around the world. The second and third world meals consist of rice with beans versus only rice, respectively. In contrast, the first world meal is a catered plate with pasta from ABC Pizza. Patrons can upgrade to a first world meal with a donation through an auction process.

The banquet also raises money through raffle items, such as CycleBar gift cards or a movie basket, and a silent auction.

The proceeds from the silent auction go towards Seeds of Hope, the charity associated with the AHN mission trip to the Dominican Republic.

With over 100 people in attendance and around $3,000 raised, the Hunger Banquet was a hit event.

Junior, Sophia Doussan said, “As a member of Interact Club, seeing the amazing turnout this year and knowing that so many people are supportive of the cause really brought a smile to my face. We are so fortunate as a school and many of us take that for granted; it [The Hunger Banquet] is a nice reality-check.”

The plans are already in motion to make next year’s Hunger Banquet even more successful.

Junior, Julia Lee, said, “We’re planning on getting way more middle schoolers involved. This year, we offered them a free dress pass for attendance, and a bunch of them came, so we’re expecting an even higher turnout next year.”