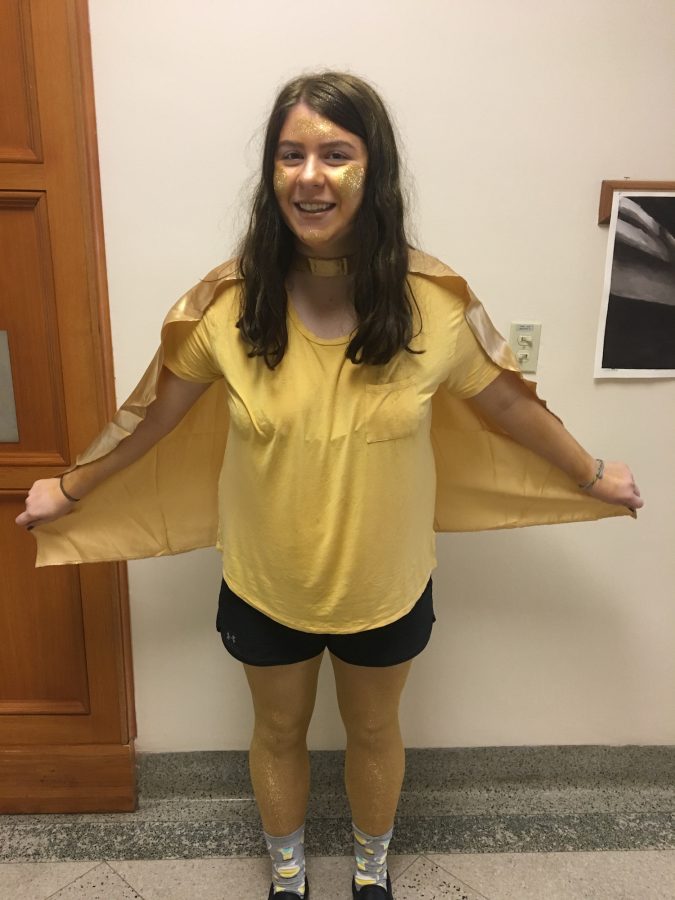 Senior Liz Benjamin got creative with the Harry Potter theme and dressed up as the first snitch Harry caught, while playing in the very popular wizard sport of Quidditch.

Academy’s 2017 spirit week was one less day than previous years because of the elementary school’s Grandparents Day. Because high school agreed last year to take the day off to open up more parking spaces for the visitors, the students only had three days to dress up, instead of their usual four.

Each day came with new surprises and a specific event scheduled for the student body. While this meant shorter classes, it also meant for a time for the entire school to come together and celebrate each other, in different ways. Monday, the student body celebrated Mass together to commence the beginning of Catholic Schools Week, then, later in the day, enjoyed the pep rally held in the gym.

Sophomore Brianna Benito says, “Even though it was in the middle of the day on a Monday, all of us got really into the pep rally and had an awesome time playing various games against each other.”

Tuesday, Academy hosted their annual Poetry Out Loud contest where the winners of each grade competes against each other in front of the school to eventually move onto the state contest. On Wednesday, all of the students traveled to various organizations for community service day, to be reminded that it is so important to spend time and help those in need. Finally, the awaited Jagball was held on Thursday, as each grade played against each other to get points for the week and rein the supreme champions.

Senior Reilly Gillis says, “Jagball has always been my favorite event at Academy because everybody gets so into it and I love to make alliances with other grades and cheer them on as well.”

Each grade had a specific assignment under the category given to the specific day, and they were left to figure out the details involving their costumes. Usually, the grades decide together the exact theme to be, through their social media accounts, and all coordinate their outfits accordingly. Here are the specific themes for this year and the best dressed students of each day.

The overall theme for Monday was Holidays, and each grade was assigned their own. The Freshman always get the hardest themes, and this year was no different. They were assigned Groundhog day, so half of the grade dressed up in winter clothing and the other half dressed as if they were in the midst of spring. The Sophomores were given New Year’s Eve so they simply dressed as if they were celebrating the coming of another year, even counting down in their locker room to midnight. The Juniors were assigned Independence Day and went all out, wearing and representing the American flag from their socks to the sequined stars some put in their hair. Finally, the Seniors were given the task to dress up as Halloween, and chose to replicate the Purge: Graduation Year, accessorizing with fake blood and weaponed cake cutters.

Tuesday’s theme was legends, each grade assigned a different type of legend. The freshman were assigned to be scholars and did not coordinate a grade outfit for the day, however many took it upon themselves to dress up as their own, and one friend ground imitated the cast from The Big Bang Theory. The sophomores were given the assignment to replicate a legendary movie, so they chose to each dress up as a dalmatian from 101 Dalmatians. The juniors had the task of dressing up after a legendary athlete, and chose to become the Wildcat’s basketball team for the day from the series High School Musical. The seniors took the legendary music theme to dress up as the band, KISS.

Thursday’s overarching theme was the houses of Harry Potter, and each grade was assigned their own. The freshman were given Hufflepuff, the humble and friendly house. The sophomores were given Ravenclaw, the intelligent house. The juniors were assigned to be Slytherin, the cunning and ambitious one, and the seniors were given the most famous house, Gryffindor, the brave and charismatic one.