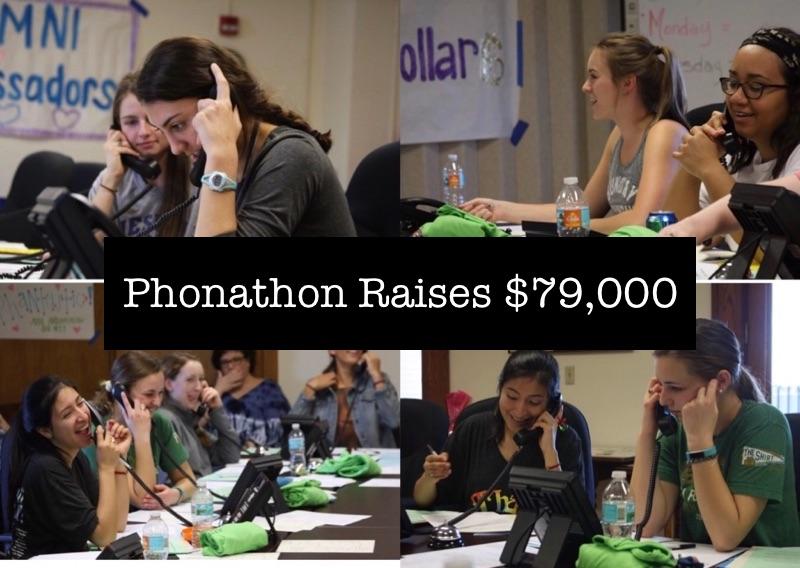 Some students were at Academy until 9:00 p.m. on Sunday to participate in the Phoanthon.

Phonathon Raises Over $79,000 For the Annual Fund

On Sunday, February 26 through Tuesday, February 28, members of the Academy of the Holy Names Ambassadors Club met outside of school hours to participate in the Annual Phonation. Students were given piles of call sheets containing contact information for thousands of Academy and Sacred Heart Alumni.

The girls were tasked with calling each Alumnus and both giving him or her information about upcoming events and also asking for a donation to the Academy’s Annual Fund. This specific fund goes towards providing tuition assistance to deserving students at the Academy. In addition to this, donors could ask for money to be delegated to other funds such as the Senior Endowment.

Patty Bohannan, who is in charge of the Phonathon, said, “The Phonathon is important for two reasons. First, the money raised helps us to provide an Academy education to students who need the financial assistance. But more than just that, this events gives us the opportunity to reach out and reconnect with Alumni of all ages.”

Patty Bohannon, the Academy Alumni Director and member of the Advancement Office, has been coordinating the Phonathon for the last 18 years. As a alumna herself, she often takes the time to write notes for the callers to comment on for certain alumni. This makes the experience more personal for both the caller and the potential donor.

Senior Julianne Nichter said, “I think that Ms. Bohannan’s notes are helpful and make the conversation less awkward. With them you have something to associate the alums with and they are no longer a stranger on the phone. Sometimes she writes that they are “really nice” and this is reassuring because sometimes the people we call are pretty rude over the phone.”

As a special thank you from the Advancement Office, Ambassadors who received the highest total monetary amount, the most donations, the most donations over $100, and the most new donations were given prizes including gift cards and tickets to Busch Gardens. These rewards this year were given to Bruni Neufeld, Juliana Jett, Nicole Browne, and Blakely Byrd.

All together, the Ambassadors were able to raise over $79,000 during the three days of the Phonathon. This is a new record for the event.