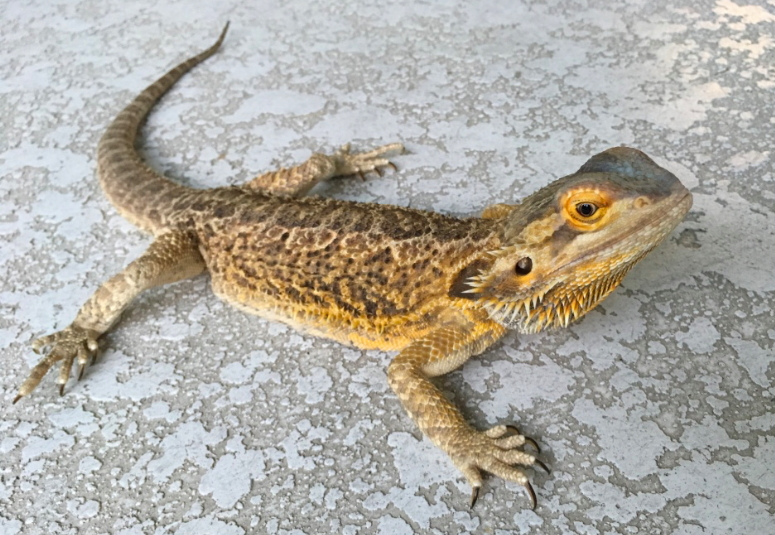 This is Zigzag, Emily Bash’s bearded dragon who enjoys roaming around as part of his curious nature.

Although Academy girls may seem to have normal hobbies and interests on the outside, they have some really crazy animal interests at heart. From sugar gliders to bearded dragons here are Academy girls’ most exotic pets..

Kennedy said, “This chickens name is Bouncer. We named her that because whenever we brought her treats she would jump up to our hands and grab the treats.”

Sophomore, Rachel Porter, houses many animals because her mother is an animal rehabber, so she has seen her fair share of exotic animals.

Sophomore, Gloria Bufano, used to have many cool animals when she was younger making her childhood very interesting. Her favorite pet was her Sugar glider who was named Chica.

Bufano said, “I used to have a bearded dragon named Reptar and a leopard gecko named Ursafit along with Chica, my sugar glider.

Freshman, Sophia Arnold, has a pet holland lop bunny which are known for their excessively long and floppy ears.

Arnold said, “He is really funny which is rare in rabbits, most of them just sit and eat. He is really cute because he has floppy ears and he kind of looks like a very small dog.”

Junior Elizabeth Diaz has a Peruvian hairless dog named Fifi which she got when she went to visit family in Peru.

Diaz said, “When we got her she was two months old and couldn’t bring her back with us due to Peruvian laws involving the dog breed. It was not until six months that we were able to bring her home.”

Junior, Elena Schillinger, has two birds, a budgie and a finch who are very hyperactive and embody unique personalities.

Dill’s full name is actually Dillard Pickle Schillinger, but he goes by Dill for short. He’s a pretty shy bird and won’t come out of his cage if people are around. When he does come out, he will hang out on Schillinger’s finger and watch everything going on around him.

Schillinger said, “He gets pretty loud when a lot is going on in the house, because he will mimic the volume of his surroundings. I’m still working on having him learn to talk but he isn’t very social; it’s hard to get him to interact with people. Sometimes when I let him out of his cage, he’ll fly around and land somewhere funny so I have a lot of pictures of him in funny places like my brother’s head or on top of a picture frame.”