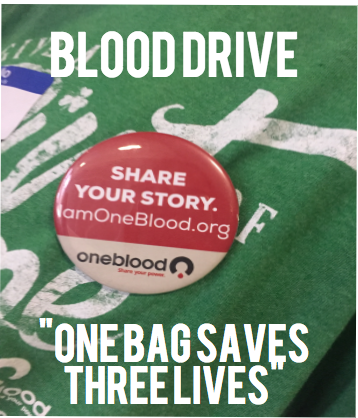 Gallery|8 Photos
Credit: Maria Cacciatore/Achona Online
With all the blood that Academy girls donated, over 100 people can be helped. The drive was a success and will continue to be a priority for the Interact Club.

Academy’s Interact Club has hosted the annual Blood Drive for the past 21 years. Club members made sure the event ran smoothly with an endless assortment of food and space to rest.  Donators filed in throughout the day to donate a total of 39 pints of blood. Unfortunately, there were many girls that were unable to due to low iron levels.

Junior President, Katherine Hahn, who supervised and organized most of the event, said, “One bag can save three lives, so this event is really important, I don’t know if my iron level is too low or not, but I am going to do what I can to help out and get others to do so as well.”

Alongside Hahn was club monitor Rebeca Zambrano’s husband, Henry Zambrano. Although he could not donate, Zambrano wanted to be present during this beautiful experience and support all the donators.

Zambrano felt it was important to share words of wisdom to Academy students, especially those who were on the fence about donating.

He says, “giving blood is a beautiful thing and every drop counts. The lives that you are saving, could actually be yours one day. Everyone here is doing the right thing for the right cause.”

For those who attempted to donate but were given the news that their iron level was too low were devastated. Junior, Alex Smith, has been a three year donator and was looking forward to another year.

“It stinks that I couldn’t donate because I am a veteran donator and have been dedicated to doing so. There was a huge turnout this year so it makes me feel better.”

First time donator, Mia Lopez was also excited to give, only her iron levels were low as well.

She said, “I am a big meat eater so I was really thrown off by the whole thing.”

The Interact club’s main goal is to support and to encourage the students of Academy to start giving back in every way possible. [Rebeca] Zambrano believes that the Blood Drive has been going on since the 80’s, but when she took over in 1996, Zambrano wanted to ensure that it was safe and highly promoted.