An Investigation Into AHN’S Rat Infestation

Although the stories of rat sightings are popularly circulated on campus, in reality, most students never see rats scurrying around Academy’s halls. Photo Credit: Piktochart | Edited by Sara Phillips

An increasingly hot topic among students and teachers alike has become the rat sightings at AHN. Even with the strict rules forbidding eating in the classroom, food products are left in lunch boxes, lockers, and on the hallway floors day after day, a significant factor in keeping the rats alive.

Lori Kearney, history teacher, has had a personal experience with a rat, like many members of the Academy faculty and staff.

Kearney said, “Above the desk in my office, dead in the ceiling, was a rat.”

The pungent odor of these irksome rodents has crept into nearly every wing of Academy’s four floors.

An anonymous source revealed that one member of the Admissions department had to vacate her office for a significant period of time due to a pervasive fragrance originally thought to be decaying rat. In reality, the source of the smell was a lost container of moldy chicken.

Senior Madi Hook said, “I almost always catch a whiff of some rat smell in my science classroom.”

The rat sightings have even occurred outside of Academy’s walls.

Junior, Kelsie Killian, said, “I saw some rats in the bushes during lacrosse practice. I pulled back a bush to find a lacrosse ball and two rats scurried away into a sewer grate.”

Academy’s maintenance staff plays a vital role in the pursuit of annihilating the rats.

A source from Academy’s buildings and grounds crew said, “We use traps to catch the rats. Usually, we’ll put peanut butter in the trap, but if that doesn’t work, we’ll use pepperoni. The Academy rats have an advanced palette, and sometimes they get tired of the peanut butter. We’ll put the traps in the ceiling and mark them with a colored push-pin stuck into the ceiling tile.” 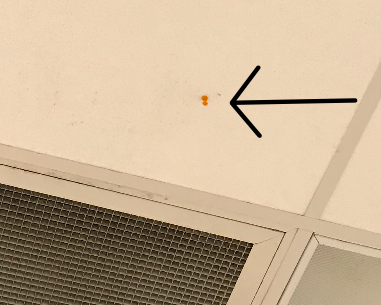 The best way to prevent future rat sightings is to eliminate the rats entirely by removing their food source. Students must stop leaving snacks around the school, a goal that seems unachievable.

Junior, Nina Alberdi, said, “I usually don’t leave food in the hallways, but last year I left some chicken nuggets in the hallway because I couldn’t bring them into class. Then, I forgot about them. I think that’s how food gets left around.”

As for the teachers, many have resorted to air fresheners and odor-neutralizing sprays to combat the pervasive stench.

Until the rats have vacated AHN, only one thing can be said for certain: