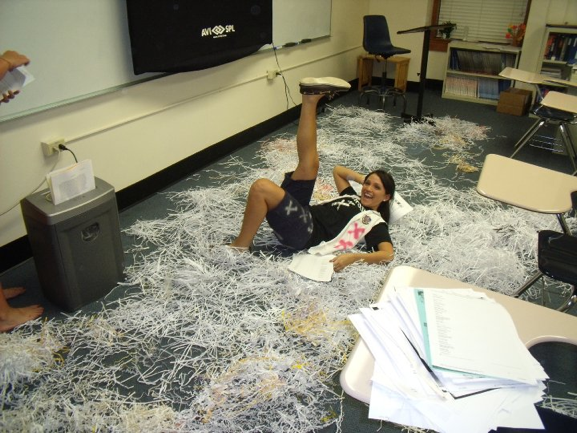 Every year seniors destroy their uniforms with scissors and spray paint to go out in style Photo Credit: Anne Mikos (used with permission)

Senior prank day is an infamous occasion at the Academy, yet a day that requires much creativity and planning from the senior class. Every year a new twist or theme takes over the school and can either be legendary, or disastrous. Each senior class has their own take on prank day whether it be a themed day filled with water guns and decorations, or a masterful plan to shock the school. The Class of 2017 may only remember back to the Class of 2014’s pirate themed prank day, yet teachers who have been at the Academy longer than seniors have been alive remember the best and worst pranks the school as seen.

“When I was a senior we basically split up our pranks. We did pranks based on different classes. When I was as senior, the senior locker room was on the one side of the fourth floor and the freshmen were on the other side, so we decorated our senior locker room like heaven and the whole fourth floor hallway we blacked out with trash bags and turned it into purgatory, and then the freshman locker room was hell. The sophomores were on the third floor and they had a thing for giant hair bows so we literally put giant bows all over the third floor on the ceiling, doors, on walls, there were hair bows everywhere. We also put solo cups filled with water in their locker room so they couldn’t get to their lockers. The juniors were in the courtyard so we decorated the courtyard like a jungle and we had a pictures of every juniors face photoshopped onto different animals so it was like a zoo. We put a jeep with a cow in the back, I don’t know why… We put shredded paper on a bunch of teachers floors because they would give us a hard time about cleaning up and we toilet papered the bathrooms.”

“It was disgusting. They had “dead” babies hanging all over the place and red food dye in all the toilets. They had a DJ here at seven o’ clock in the morning blaring music. I had 45 to 55 phone calls from next door plus the police showed up. It was lovely.”

“I didn’t like the one where they put the tuna fish in the junior lockers. They put baby oil in the squirt guns instead of water. That’s why they cut it all back.”

Emily Pantelis, a part of the class of 2007, fondly remembers her senior class’s infamous selling of the school prank along with how her whole class camped out in front of the school. Academy received many calls about their school being up for the sale and the ad in the paper. Both the sprinklers going off and the cops being called caused the Class of 2007 to spend the rest of the night at a classmates house until they moved the campsite to the foyer. They spent the rest of the day dodging classes and hanging out in the lounge. Many teachers still talk about this legendary prank to this day.