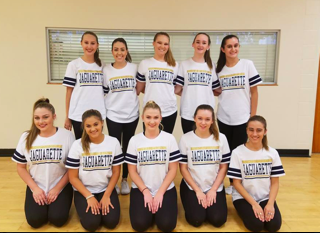 Nine of the Jaguarettes attended the Universal Dance Association in St. Petersburg over the summer of 2017.

On Nov. 23, 2017, the Senior Jaguarettes; Audrey Diaz, Gracie Wipfli, Sam Cano, Abby Rodriguez, and Sam Garateix will perform at the annual Macy’s Thanksgiving Day Parade. The team is starting to prepare for their performance in advance to perfect the assigned routine with which they will represent Academy.

The Jaguarettes went to a four day Universal Dance Association camp over the summer to train for their upcoming year and pick up choreography to bring home. During this process, on the second day, the seniors had to learn a dance that they would perform on the third day of camp that would count as their official audition for the Macy’s Thanksgiving Day Parade. All of the seniors passed the audition, and were awarded with medals and certificates. Because of their skills displayed at the tryout, the girls were also invited to dance in London for New Year’s Eve and at Disney World right after Christmas.

The senior Jaguarette team must meet and learn multiple parts of dances and routines in order to perform alongside thousands of senior dancers from high schools across America. The four dancers received the choreography videos last week and are beginning to memorize them.

Abigail Rodriguez (‘18) said, “We just got sent the video for the choreography for the dances being performed at the Parade and will start to learn them individually before we practice them together.”

There are two events and dances that the senior Jaguarettes must perfect; a two minute dance at Herald Square before the parade and a cheer and march to perform in the actual parade route in front of Good Morning America.

On top of the busy schedule that the girls must follow to be prepared for the parade, the Jaguarette seniors are also practicing a jazz and hip hop routine for a competition with the rest of the team and learning dances and stand routines for their weekly games and events.

Mary Kelly Cardillo (’20) said, “I am really excited because I saw my sister [Claire Cardillo (’14)] participate in the parade when she was a senior, and now I get to see my friends do it. It is a once in a lifetime experience.”