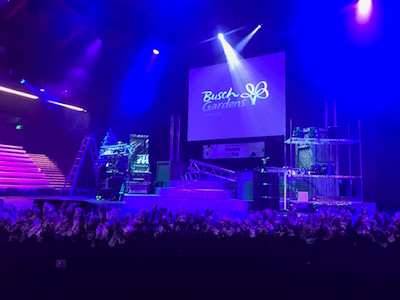 “I went around the park with my friends, we rode rides, and we filled out our booklets. My favorite part of Physics day was being able to roam freely because we were’t confined to a certain area and that freedom made it more fun,” says Cassidy Neely (’21).

At the Academy, eighth graders, freshman, juniors, and seniors taking a physics class go on the trip. While at Busch Gardens, students are given an assignment by their teacher to complete as they go through the park. The packet is designed so that all students can complete it even if they do not like rollercoasters. The students are accompanied on the trip by several parents and other teachers.

Lizzie Gold (’21) says, “My favorite part of physics day was spending quality time with my friends. It was cool getting to watch our sisters volunteer during the show. My favorite part of the show was watching them make smoke rings. We got to go on rollercoasters with our friends which was really cool and we recorded the time and the distance of the drops for the assignment we had to complete.”

“It was my first time going to physics day and I really enjoyed it. My favorite part of physics day was the show, I thought it was very cool. I was going to go on Sheikra, but it closed down. I spent the day walking around with Mrs. Krukar and Ms. Dubee and I saw a baby kangaroo which was extremely cute,” says math teacher, Anne Wynn, who chaperoned on the trip.

Around the park, there are activity and demonstration stations set up for students to watch and do. Going to these stations is part of the assignment for the freshman. 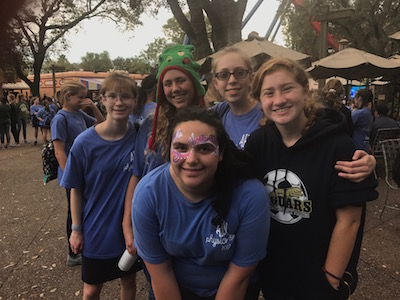 Bush Gardens also puts on a live interactive physics day show that is about 40 minutes long. In the show they demonstrate to the students different applications of physics.

Victoria Marcantoni (’18) says, “Even though the show hadn’t changed much from freshman year, it was still fun to see physics actually in action and a display of how what we have been learning can be applied to every day things like roller coasters and animals, like the sloth. I have been to Physics Day three times now, and every time I go I find out something new and it helps create a new experience for me and the understanding of physics. I really enjoyed going and honestly I am going to miss it next year.”

“My group and I just walked around the park. We started at Montu and went on all the rollercoasters on the way to Sheikra. The breakdancers at the show were fun to watch. It was funny because all the Academy girls were in the center and everytime they would say Academy a large portion of the room would start cheering. My favorite part was when the man laid down on the bed of nails and he put a cement block on his chest and they broke it with a sledgehammer. The show also had a sloth in it and it was the cutest thing ever.” says Vanessa Davila (‘18). 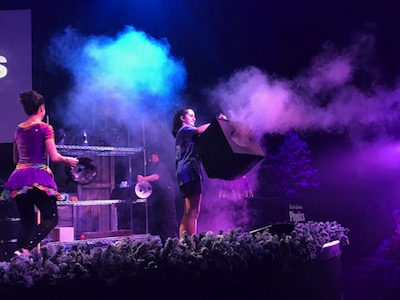