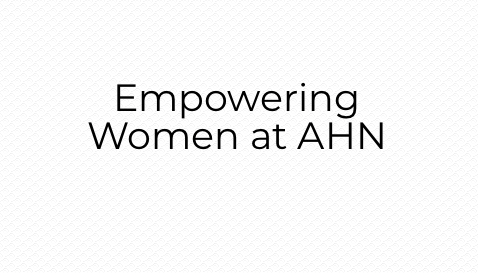 There were over 65 women along the halls of AHN. Photo Credit: Gabi Jordan/ Achona Online

The month of March was deemed national Women’s History month in 1980. The month was created to recognize influential women who helped to pave the way for women everywhere. On Monday, Mar. 20, Academy hosted a convocation dedicated to Women’s History Month.

The first half of the convocation was spent in Brady Center North, where History Department Head, Lori Kearney, played an informative video for Women’s History Month. The video

During the second half of the convocation, the underclassmen walked the halls of AHN with their iPads. In the second, third, and fourth floor hallways along the walls there are pictures of important women throughout history. Each picture features a small paragraph explaining who the woman pictured is and her contribution to the world. After reading this, the students used their iPads to scan a QR code which took them to an additional website that offered more information about that specific woman’s life.

Gracesyn Moll (‘21) walked the halls with her friends. She learned a lot about women she had never heard of before the convocation.

Chase Cordoves (‘21) said,“I liked this convocation because it was interactive, it wasn’t a speaker. I liked that it was so different from everything we have done before.”