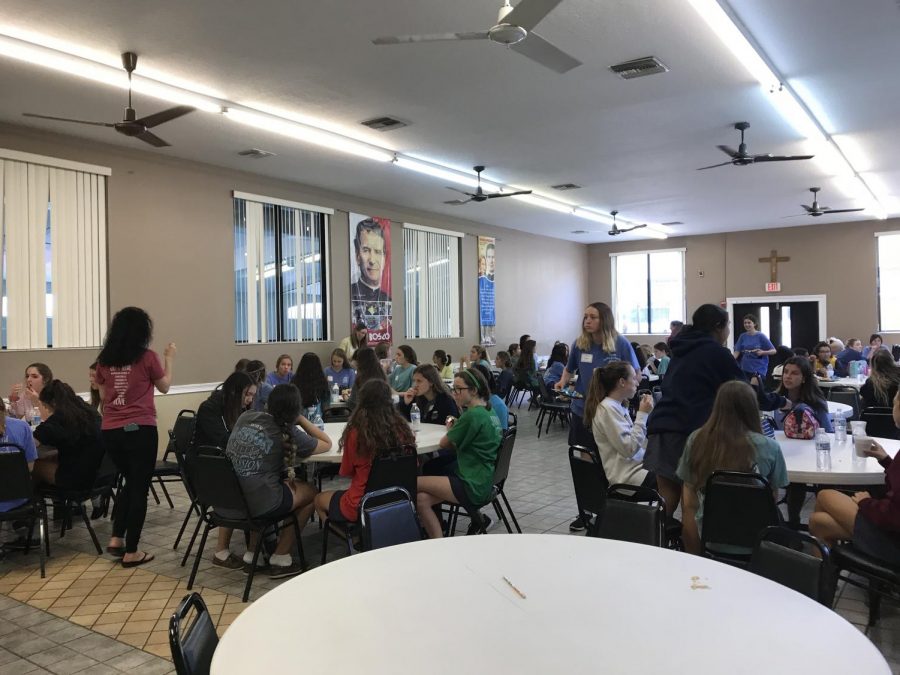 AHN Juniors reflect on the retreat activities as they break for lunch.

This was the first year that the Juniors did not get to participate in the usual ropes course at the Dayspring Conference Center. However, it is still going to happen for the Class of 2020; it will be part of their Senior Retreat next year. For this year, they were able to take part in a day of games, activities, and small group discussions with their sisters.

Dorothy Pickard (‘20) said, “I really enjoyed the retreat, but it was very similar to last year’s retreat. I didn’t feel much of a difference, but I still had fun and I can’t wait for next year’s retreat.”

Students boarded the buses at 8:00 a.m. and were greeted by the leaders at Mary Help of Christians. They began with introductions to the leaders and a quick but fun game. It was similar to hot potato but if a student ended up with the ball when the music paused, they would have to do the challenge that the group leader chose. They then were directed into the building for a snack and instructions about the rest of the day.

Tess Wadsworth (‘20) said, “They split us up into groups representing parts of a house, each group wrote about what they symbolized, and in the end all of the parts came together to symbolize parts of our faith. I enjoyed the analogy that they came up with about the house and the parts of it. It can have both a materialistic meaning and a spiritual meaning.”

Then it was lunchtime and the girls excitedly headed back down to the cafeteria to eat and talk with friends. Immediately after, they all headed to the church for adoration and mass where they were able to pray and reflect in the company of their sisters.

Hope Joffray (‘20) said, “I had a good time at the retreat and I felt closer to my sisters after it. My faith grew from the peaceful adoration and mass that we experienced.”