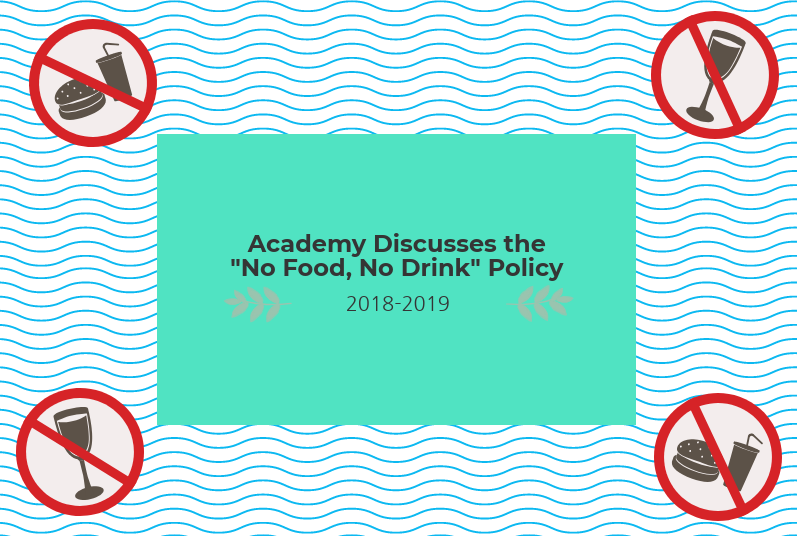 “I feel like there’s not enough time to eat and get to class and so either we compromise the nutritional aspect of it or we compromise being late to class. I understand what the purpose was, but I don’t think it’s being carried out correctly,” says Isabella Leandri (’19).

As many people are aware, early on in the first semester of the 2018-2019 school year, Academy implemented a high school wide ‘no eating policy’ in the main building. As second semester gets under way, the policy has continued to be sustained amongst the rules and regulations of the school year.

According to the AHN Administration at the time of implementation, the policy was a necessary evil due to the level of trash and leftover food and drinks which were being discarded amongst the hallways and classrooms. Along with this, many students were failing to abide by the lunch rules which were in place for the underclassmen stating that during lunch, freshmen and sophomores must eat in the Brady Center, while juniors and seniors are meant to eat in the courtyard and senior lounger, respectively.

The policy elicited varying passionate responses from the girls of the high school. Some girls believe that the policy is unfair because they claim to not have been part of the problem which sparked the new rule.

“I feel as though enforcing the rule across the entire high school is unfair because not everyone is a part of the problem and so many of us now have to go all day, from morning to lunch, without eating anything in order to save time and it’s made everything really difficult,” says Allie Golson (’19).

In accordance with this, many girls genuinely believe that the new policy is nutritionally unhealthy.

“I understand where administration is coming from, a lot of girls do leave their food behind and it can be a safety hazard. however, with the amount of girls that don’t eat breakfast in the morning because of a lack of time, break is the opportunity to actually get food in their system. however, due to the new policy, a lot of girls just skip eating entirely because they don’t have enough time to go down to sage, buy food, eat it outside, and make it back to class. this worsens their energy, making it harder for them to focus in class,” says Reagan Finch (’20).

Though the high schoolers’ concerns are justified, many members of the faculty and staff argue that the policy needed to be implemented in order to accurately communicate to the girls the level of trash which was being distributed amongst the halls of the school.

“There was so much trash before that I was constantly having to kill bugs. I think the new policy is absolutely necessary,” says History department teacher, Beth Chase.

In compliance with lessening the level of trash around the school, a key element of the policy includes the renovations which the school will be undertaking during the summer before the 2019-2020 school year.

Vice Principal Erin Krukar says, “The largest reason simply has to do with the renovations happening this summer. There’s going to be a lot more carpeting around, cloth chairs, and couches, and we just want to keep it looking as nice as possible for as long as possible. In reality, we kind of just wanted the implementation this year to start really getting the idea out there so that next year it’s an easier transition into the idea of having no food or drink in the new building.”

The policy itself is not meant to act as a punishment, but simply more as a precaution for what is to come next year, taking into consideration what has happened in the past when food and drink were allowed.