According to Gasparillapiratefest.com, the first Children’s Parade took place in 1947.

The senior class participated in the 2019 Gasparilla Children’s Parade on January 19, 2019. It is an AHN tradition for students to ride on the float and throw beads to those attending the parade.

Before the parade began, students were given the option to meet at Academy at 1:00 p.m. and enjoy a pre-parade picnic.

All students met and got situated on the float at 3:30 p.m. Here they enjoyed music and were able to see all the other floats. In front of the senior float, AHN had another float for the eighth grade students.

Some seniors such as Myah Rhines (’19) rode in the parade when they attended AHN in eighth grade.

Rhines (’19) said “Even before the actual parade started, I was having fun. I loved just getting pumped up with my friends and jamming to the music around us. I am so glad I got to do the parade again, it was an overall great experience.” 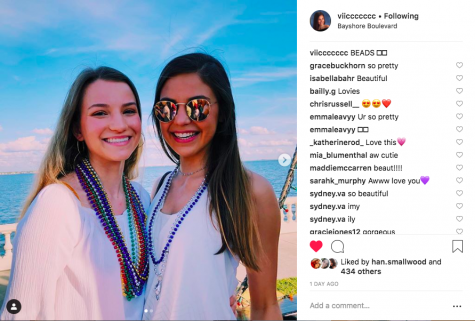 Similar to Rhines, other seniors enjoyed the presence of the people around them.

“I loved turning around in the middle of getting a new set of beads and seeing every senior smiling and dancing at the same time. Everyone was so happy, even Mrs. Krukar was dancing,” says Victoria Wehling (’19).

The AHN float began on the actual parade route at 4:40 p.m. and they threw beads for about an hour. The students got off the float at 5:30 p.m., but the parade itself did not end until 6:00 p.m.

Not every senior took part in the parade, but those who did only had great things to say about the event.

Katherine Fernandez (’19) said “I was really excited to be in the parade this year because all the pictures I had seen from previous years made the float look like a lot of fun. I had a great time with my friends and it was exciting to see people I knew all throughout the parade route.”