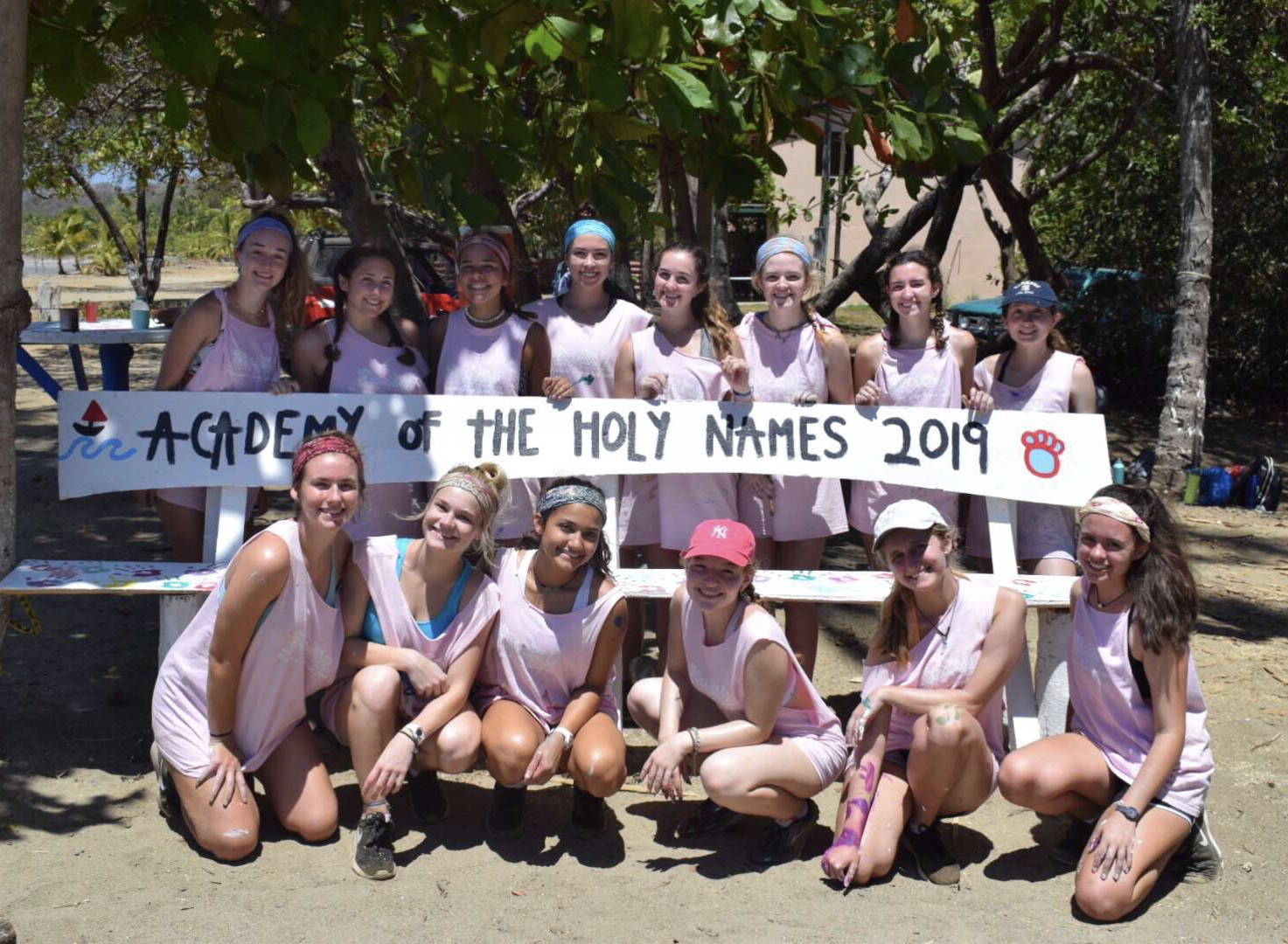 The Costa Rica Mission Trip’s inaugural trip was in 2017.

On Monday, March 11, 2019, 14 students, alongside three chaperones, left for Academy’s third mission trip to Costa Rica. The trip consisted of six juniors and eight seniors, some of which have been going on the trip since their sophomore year. Latin teacher Ariana Louder, English teacher Sara Moses, and volunteer chaperone Gissel Fonseca served as the trip’s adult leaders. The mission trip lasted a total of six days, with the girls returning on Saturday, March 16, 2019.

This year, the student leaders were Myah Rhines (‘19), Anabela Ebsworth-Llavona (‘19), Megan Scanlan (‘19), and Gabby Boyd (‘19). Ebsworth-Llavona and Boyd served on the trip for the third consecutive year. It was Rhines’ and Scanlan’s second year as missionaries on the trip.

The girls flew out of Tampa at 6:00 a.m., landing in Houston, Texas, around 8:00 a.m. After a three hour layover, the girls boarded their flight to Liberia, Costa Rica, at 11:00 a.m. The Academy missionaries arrived in Costa Rica at 2:30 p.m., and after retrieving their luggage, they boarded a bus to travel to Sámara, which is roughly two hours from the airport.

When they arrived in Sámara, the girls settled into their assigned rooms at the hostel they stayed at for the week, which is named Yuri and run by a woman named Doña Cristina. The missionaries have stayed with Doña Cristina for all three years. Before dinner that night, the girls spent some time resting and at the beach.

Tuesday morning, the Academy missionaries woke up by 7:00 a.m. for breakfast, Louder gave the girls the option to wake up by 6:00 a.m. to pray the rosary on the beach prior to breakfast, which a group of the missionaries participated in daily.

Following breakfast, the girls started their day by visiting Crear’s new facility. Asociación Crear, which “provides supplementary educational, recreational and career opportunities to members of the rural beach communities surrounding Playa Sámara in Guanacaste, Costa Rica,” is the organization that the Academy students performed service for throughout the week. There, the girls were given information about Crear and the organization’s mission, as well as their project for the week.

From Tuesday through Thursday, the Academy missionaries worked in a community called Matapalo. The girls were given the task of beautifying the community sand soccer field by rebuilding and painting the benches surrounding the space. The soccer field is located alongside the beach.

On Tuesday, the Academy students began their project by assisting in the removal and reconstruction of the benches. Since the seating was made out of wood, many of the benches were rotting and infested by termites. Soon after discarding of the wood, new benches were made and coated with a substance to prevent their destruction by termites. In addition, the girls began repainting the tires surrounding the soccer field, which also serve as seating.

Thursday was the last work day at Matapalo for the girls. They focused mainly on painting the bleachers, which had been constructed early that day. However, some girls also helped clean the soccer field by picking up trash and raking the path. Following the completion of the bleachers, the remaining benches were painted and coated with a clear layer to help preserve the paint.

Sofia Guixens (‘20) said, “I definitely think the most impactful part of the trip was how appreciative the people of Costa Rica were for the work we did. After we finished painting the benches and bleachers for their soccer field, they seemed so excited about being able to show off their new field. This trip has taught me to be grateful and more appreciative for the little things in life that I took for granted before like air conditioning. After coming back from the trip, I have been way more thankful for the little things my parents have done for me.”

On Friday, the girls woke up early for their annual hike. The hike is mostly uphill and ends at a beautiful, hidden beach. Around 12:00 a.m., the students arrived at Crear to begin their last day of work, which entailed painting the fence surrounding Crear. In addition, some girls took up the task of raking the area around the building.

The Academy girls were then given the rest of the day to rest and to prepare for their trip home the following day. Saturday morning, the missionaries woke up early to watch the sunrise, which occurred a little past 5:30 a.m.

Overall, the girls learned a lot from their experience in Costa Rica. Those missionaries who had the opportunity to return to Sámara for the second or third year reflected on the trip’s impact on them. For example, Boyd reflected on the place the Costa Rica mission trip holds in her heart.

Boyd said, “I think that going on this trip has not only impacted myself as a person, but as well as a student. It has taught me how to put your heart and soul into everything you do, even if it appears small. I’ve learned how to put myself out there and to interact with others and work through language barriers. For example, last year, we met a kid named Yosimar. He was really shy at first and my broken spanish made things difficult in terms of communicating. However, one day when we were taking a break from painting a church, we started playing, and we chased each other around with paint brushes. It seems silly, but talking and laughing with him really made my day.”

The girls saw God in many ways on the trip, especially in the actions of their fellow missionaries.

Ebsworth-Llavona said, “When Alyssa [Sanchez (’20)] gave her Spiderman watch to one of the little boys in the market, I truly saw God in her actions. He was so happy to receive the watch, and I feel like I saw God in Alyssa’s gift to the boy and the boy’s happiness.”