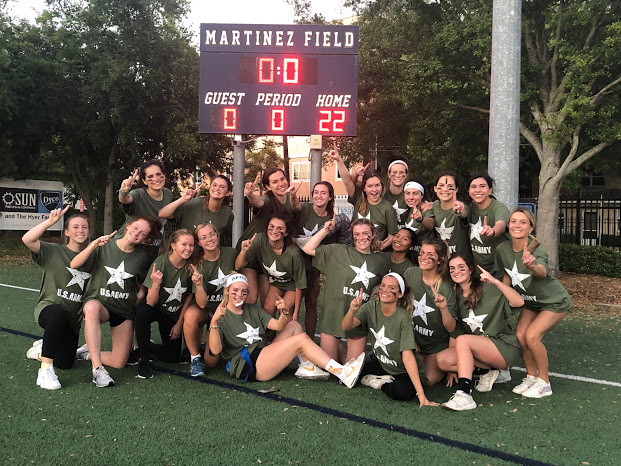 The seniors were coached by Jesuit football players Jaden Pask (‘19) and Larry Hodges (‘19).

AHN’s annual Powderpuff game took place on Monday, Mar. 25 at 7:00 p.m. on the soccer field. All parents and students were welcomed to the field at 6:00 p.m. to enjoy free food and drinks from the Dad’s Club. The game ended with a huge win for the seniors, with a score of 22-0.

Senior Rebekah Eicholtz, the student council member that planned the event, said, “Last year we had a decent turn out, but I wanted to make it a lot more exciting and competitive this year to make people want to play. I think having such a classic theme like army vs. navy really got people excited to play and show their school spirit.”

Junior and seniors participating in the game began warm-ups at 6:30 p.m. in order to get ready for the big game. Athletic director and referee Kevin Vargas met with each team and their coaches to go over the rules. To kick start the night, the Quarter Notes sang the National Anthem and then it was game time.

During the first half, seniors were dominating the game in both defense and offense. With the help of senior quarterback Hannah Smallwood, the seniors were able to score two touchdowns, gaining two extra points with each. The seniors’ defense held the juniors, allowing juniors to make little progress. The first half ended with the seniors in the lead, 16-0.

At halftime players got to rest as everyone enjoyed watching the Jaguarettes perform a dance.

Ashley Dingle (‘19) participated in powderpuff this year and was one of the few that also played last year.

Dingle said, “Powderpuff was so much fun this year because of how many seniors participated, and it is one of my favorite events at Academy because I love playing flag football. Compared to last year, much more people showed up, which made it more competitive and enjoyable.”

During the second half, seniors continued to dominate the football game. The juniors were held, ending with zero points. In the half, the seniors scored another touchdown, ending the game with a win.

Junior Maddie Boos (’20) said, “In the beginning, the juniors thought we were going to win with our good coaches and the arms we had for throwing footballs. But after we saw the seniors play really well and they got really ahead of us, we knew we were going to lose. Next year we agreed to practice more plays before the game.”