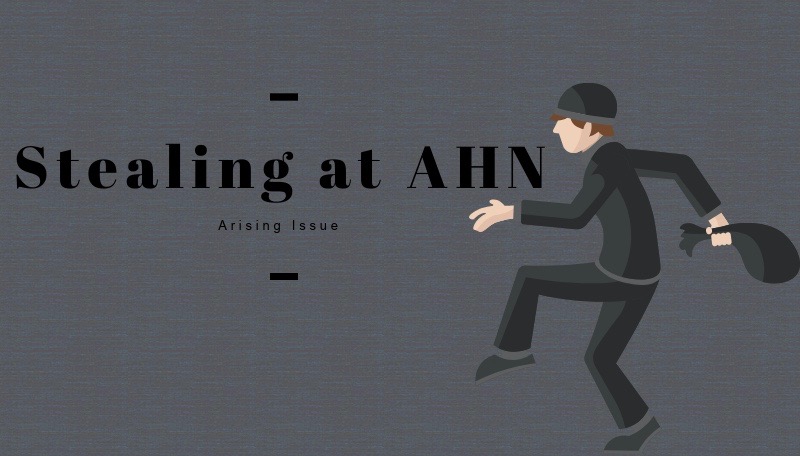 Hannah Rodriguez (’19) says, “I have had a few things stolen from my bags that I leave in the hallway or at rehearsals for dance at Academy.” ((Photo Credit: Alley Pauley/ Achona Online))

Hannah Rodriguez (’19) says, “I have had a few things stolen from my bags that I leave in the hallway or at rehearsals for dance at Academy.”

In recent weeks, many issues have arisen regarding students stealing from other students, or from the school. The recent incidents include stolen Airpods, stolen vending machine snacks, and various desserts being taken from bake sales.

Madison Troy (‘19) and Sam Lleras (‘19) claim to have had their Airpods stolen. Airpods are wireless headphones created by Apple, and they can only connect to Apple Devices.

Troy says, “I had my Airpods taken in the senior hallway on the fourth floor. I also had my shoes stolen across the bridge in the Arts Center.”

Airpods range from $159 to $199. This expensive price tag may be the reason as to why multiple pods and charging cases have been stolen on campus.

Another issue that has been brought to the attention of administration is stolen vending machine snacks. Recently, the snack vending machine in the Senior Kitchen has been removed due to a large amount of snacks missing from the bottom row.

Beth Chase, Coordinator of the Senior Class says, “I was very disappointed in the seniors. I believed there was no way our girls would ever do anything like that. When the people from the vending machine company explained to me it was always the first snacks on the bottom row missing, I realized that it was possible the girls were taking snack illegally.”

Another incident of stealing is desserts and treats being taken during breaks from Bake Sales. Bake Sales do not always have workers behind the table watching the food in the courtyard, so anyone can grab a container of cookies and not been seen.

This is an important issue because Bake Sales are scheduled to earn money for the club or organization right before a big event. If items are being stolen without compensation then the club potential funding.

One possibility the stealing issue has gotten worse is that girls leave their personal items, such as bags, water bottles, make up accessories, and lunch boxes  all over campus. There is easy access to all items.

Summer Wolf (‘19) says, “I see everyone leaving their extra bags or lunch boxes all around campus because they do not want to carry them to class or across the bridge. There are also a ton of Yeti Cups in the lost and found, and they are very expensive. I feel since we all just leave our things everywhere, where they can be easily stolen, it is sort of initializing or encouraging the thieveries.”

Other things have been reported stolen on campus as well. Macbook chargers are sold at Apple for $79 and many Academy students have had problems with the chargers breaking, or the cords stopped charging the computer.

Chanita Belcher (‘19) says, “I had my Macbook charger stolen and I had to go to IT and get a new one. I also had to buy four different AHN sweatshirts because they kept getting taken.”