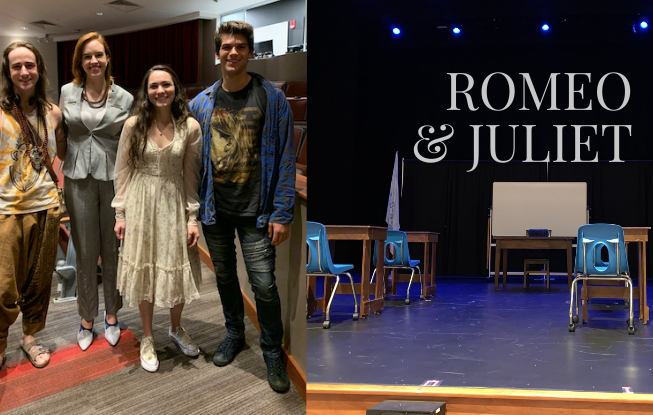 Asolo Repertory Theatre put on “Romeo and Juliet” for their 11th performance at AHN.

On Oct. 14 and 15, Asolo Repertory performed Shakespeare’s “Romeo and Juliet” for AHN in the Bailey Center’s Scarpo Theatre.

The Asolo Repertory Theatre from Sarasota, Florida, performed their modernized version of Shakespeare’s classic for freshmen and sophomores on Monday, Oct. 14 and juniors and seniors on Tuesday, Oct. 15.

The story of two “star-crossed lovers” whose love was forbidden took place in a classroom setting.

“The play was really interesting and it was cool to see a visual of the play we read last year in class. I feel that students understand the story better when seeing the play in action after studying it in class,” said Gabby Morrison (‘22).

Each year, AHN students study Shakespeare’s plays in their English class which. At times, the play they are studying is preformed by Asolo.

In order to fit the performance into a 45-minute run time, Asolo reduced the three hour play by cutting multiple characters, scenes, and lines.

“I feel like the writer who adapted the play did a great job condensing Shakespeare’s behemoth of a play into a forty five minute run time,” said Caroline Lamoureux (‘20).

Julianne Bland (‘21) and Olivia Martinez (‘21) assisted the cast members by bringing them water, conducting sound checks, and showing them around the arts building. They each also ushered students to their seats in order to keep the performance on schedule.

“The play was amazing, the best one I’ve seen so far from Asolo. The comedic aspect of the play was great because it made a connection between the audience and the characters themselves,” said Grace Cronen (‘21).