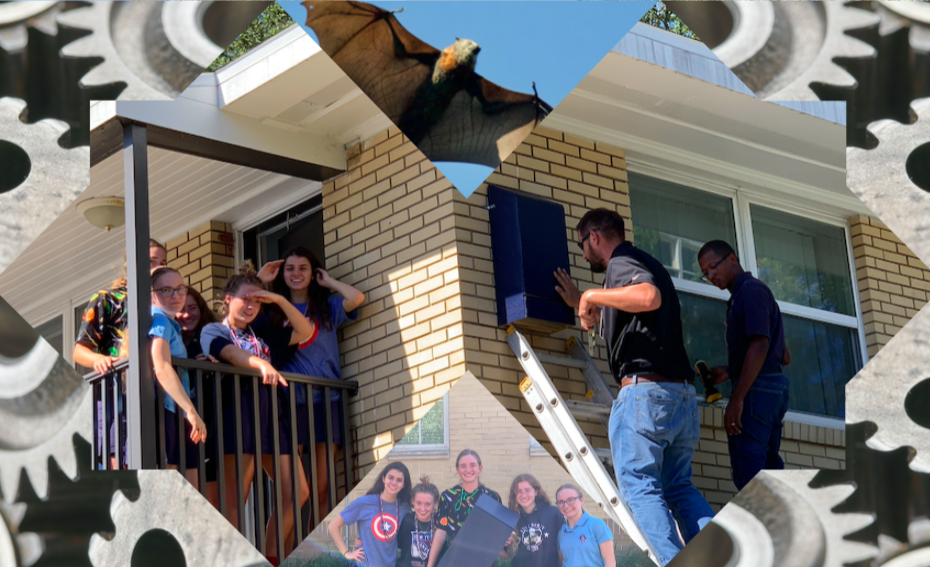 Principles of Engineering is made up of five girls.  (Photo Credit: Reagan Finch/Achona Online/Piktochart)

Principles of Engineering is made up of five girls.

This past week, AHN’s Principles of Engineering class implemented their first project of the year; a bat house.

“The project was to build something to house the endangered bats of Tampa, as they’re losing their habitats due to rapid development of Downtown and South Tampa,” says Grace Cronen (‘21).

The species most abundant in the Tampa Bay Area is the Mexican free-tailed bat. Unfortunately, they have been losing their homes due to recent development in the Tampa Bay Area. Mexican free-tail bats typically live in tunnels, under rocks, in hollow trees, or any other dark and cool climate place. However, these places are being torn down to make room for new buildings. These bats, now having no where else to go, search for homes in human buildings.

Bats 🦇 get a bad rep in the media at this time of year – but these wonderful flying mammals are extraordinarily important for a healthy eco system. They are also truly gorgeous creatures 🦇🦇 (rescued/cared for by my dad under license) ! pic.twitter.com/uLNUpJMmPQ

Bats are important in maintaining an ecosystem. They help by pollinating flowers and dispersing seeds. Nearly 500 types of flowers rely on bats to pollinate them. In addition, they also help stop spread disease and control pests, because their mainly consists of insects. Without these bats there would be less vegetation and more mosquitoes.

The class has been working on the house since the beginning of the year. They had to plan, sketch, prototype, and build the house themselves.

“We started on the first day of the year. We researched, prototyped, presented to administration, and here we are,” says Megan Corrigan (‘20).

The house itself is about 3 feet by 1 foot long. Inside there are four mesh panels that the bats can hang off of. Hundreds of bats can fit in the house at once due to their small size.

“The project was straightforward enough that we could start slow in order to build up to larger projects. It utilizes all of their skills from last year. In addition, it was budget friendly, and environmentally friendly, ” says Principles of Engineering teacher Anne Wynn.