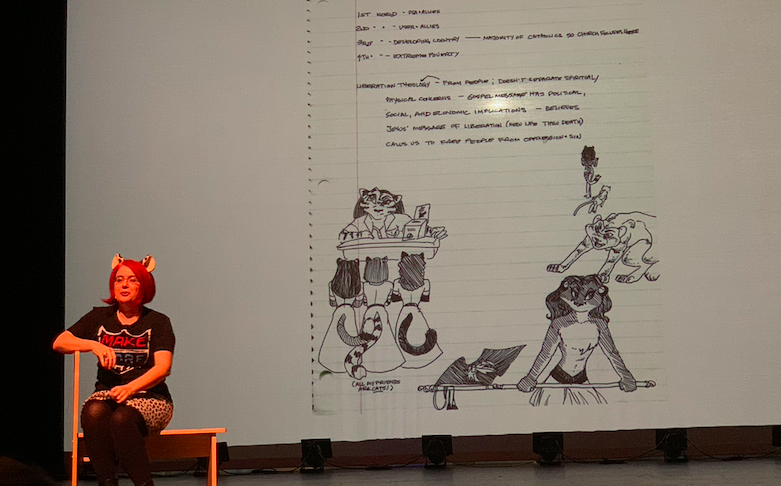 “If you’ve been given gifts by God, you don’t have the right not to use them, and I think that gives you one extra reason not to quit when you’re feeling like you should,” says Hogarth. (Photo Credit: Reagan Finch/ Achona Online)

“If you’ve been given gifts by God, you don’t have the right not to use them, and I think that gives you one extra reason not to quit when you’re feeling like you should,” says Hogarth.

This past week, artist and writer Maggie C. A. Hogarth came to AHN as the annual visiting artist.

Graduating from AHN in 1993, Hogarth initially went to UF to study engineering. However, she realized that her true passion was art. Sister Mary Glavin told her before graduation that she wouldn’t be an engineer.

“I should have listened to her, because she was completely right. I walked into my first math class and realized ‘Oh.’ It also doesn’t help that my senior year I didn’t take a math class,” says Hogarth, while laughing.

Before her presentation, art teachers Melissa Lima and Paige Rodriguez gave a brief introduction of Hogarth, describing the many clubs she was in in high school, and more about her life beyond AHN.

“She has written over 49 books, and has filled 186 sketchbooks. Also, she served as Vice President of the Science Fiction and Fantasy Writers of America for three years,” Lima said, describing Hogarth.

“I was always asked to do little oddball jobs here and there, like designs for posters or flyers. There was never any question about what I put on there, and it was almost like they were saying, ‘Your work is okay and we want it.’ I felt unjudged in my work while at Academy,’ says Hogarth.

Hogarth showed some of her notes from high school, all of which were filled with drawings of jaguars, cartoons, and other doodles. She said how all of her teachers didn’t appreciate the drawings except one: science teacher Judy Perella. Perella explained to Hogarth that she was using the doodles as a memory device, she could see the drawings in her mind and therefore remember the material better.

Reflecting on her time at AHN, Hogarth gave advice to the students about following their passions and developing faith in themselves.

“My time here has helped to make me who I am now; I learned the core tools of art. You have to believe in yourself and consider your art as your gift to other people.”

Hogarth was well received by students who attended. Students asked questions about messages in her art, her time in art school, and how she feels about self expression in art.

“I think of art as a vocation, which is a radical idea in this current culture. To think of what you’re doing as a service feels weird. Society tells artists that art is all about self expression, and at a certain point their art gets too self centered, too internalized. I think when you consider it as a way to help others, connect, to serve as an instrument, that it helps counteract having your art being overly focused on yourself,” says Hogarth.