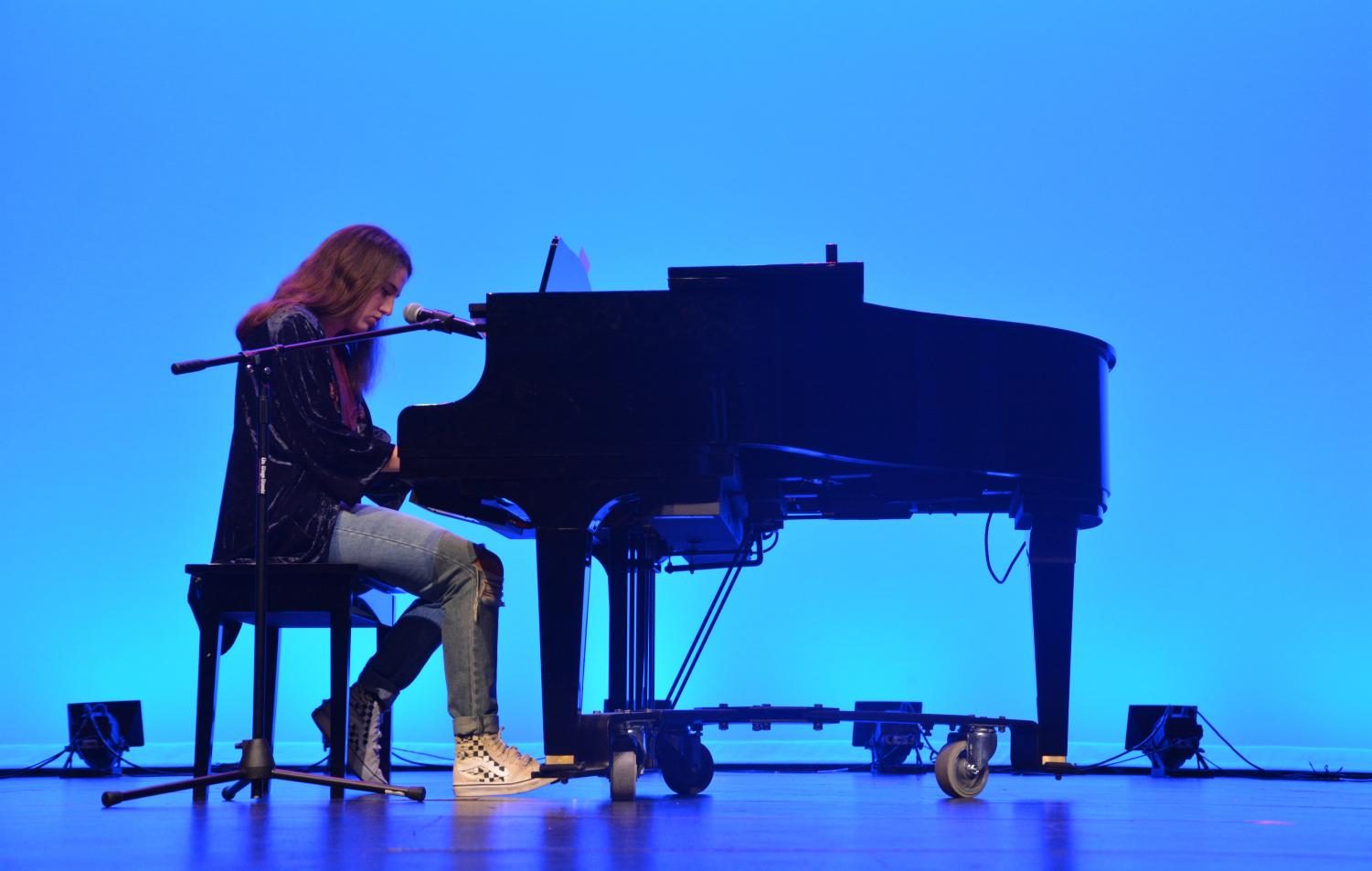 Caroline Lamoureux (’20) acted as the emcee for the evening, providing an opportunity for her fun personality to shine as she offered creative interludes between each act. “It was really fun, I loved interacting with the crowd and especially the judges,” said Lamoureux. (Photo Credits: Sydney Wills/Achona Online)

Caroline Lamoureux (’20) acted as the emcee for the evening, providing an opportunity for her fun personality to shine as she offered creative interludes between each act. “It was really fun, I loved interacting with the crowd and especially the judges,” said Lamoureux.

A hush fell over the crowd as the curtains opened at 6:00pm for the 2020 talent show, which took place Sunday, Feb. 9. The money raised by ticket sales from the show went towards senior endowment, which contributes to gifts and scholarships for the school.

Senior Claire Murphy, who attended the show, said, “I really love the tradition of the talent show because, obviously, I’m a senior and it goes towards our endowment, which means a lot to me.”

Senior Kara Petitt walked away from the show with a first place win for her sung performance of “The Only Exception” by Paramore. Petitt has always loved singing and playing the guitar, but she had never performed in front of a crowd before. She said, “I was so, so surprised when I found out that I had won, because it was my first year doing the talent show. I was super nervous before the show and was literally freaking out, but I felt a little better once I was out on the stage and saw all my friends and family supporting me.”

Following in second place were Seniors Leah Solomon and Kathia Guzman, who played guitar and sang a mashup of songs by electro-pop artist Lorde. However, the final idea to do a mashup didn’t strike them until about three hours before the show, according to Guzman. “Leah and I decided we needed to spice the performance up, so I sent Leah a recording of an idea I had for a beat while she sang to the other Lorde song that we added, and we both thought it was the perfect touch to our performance,” she said.

Changing up the song last minute made Guzman and Solomon nervous to perform it, but it all ended up being worth it. “We never thought we’d win second place, so it was an amazing feeling after how much time we had put into practicing,” said Solomon.

Seniors Reagan Finch and Tress Jacobs snatched third with a throwback-mashup dance routine featuring songs from iCarly and dances from TikTok. Following their performance, Finch said, “We really weren’t expecting to get third place at all- we had been doing talent show since sophomore year and we wanted to do one final one for fun, so we were not expecting to win in the slightest.”

The inspiration behind the girls’ mashup were songs that would be crowd pleasers for both students and teachers. “Before the dance we were a little antsy, but not too worried because we knew it was going to be a fun performance,” said Jacobs.

Senior Caroline Lamoureux was the host of the evening, offering a dramatic opening that featured singing and piano. She also provided comedic interludes and transitions after each act. Lamoureaux said, “I thought the talent show went really well. As the emcee, they let me choose how to introduce each act, so I got to have a lot of fun with that. I loved interacting with the crowd and the judges.”

The night also featured other standout performances, such as a belly dancing routine from freshman Cindy Ceijas, a comedic monologue from freshman Natalia Guzman, and a dance routine from juniors Adriana Vargas and Angie Prince. Junior Staff member Adriana James-Rodil also performed a song from Hamilton.