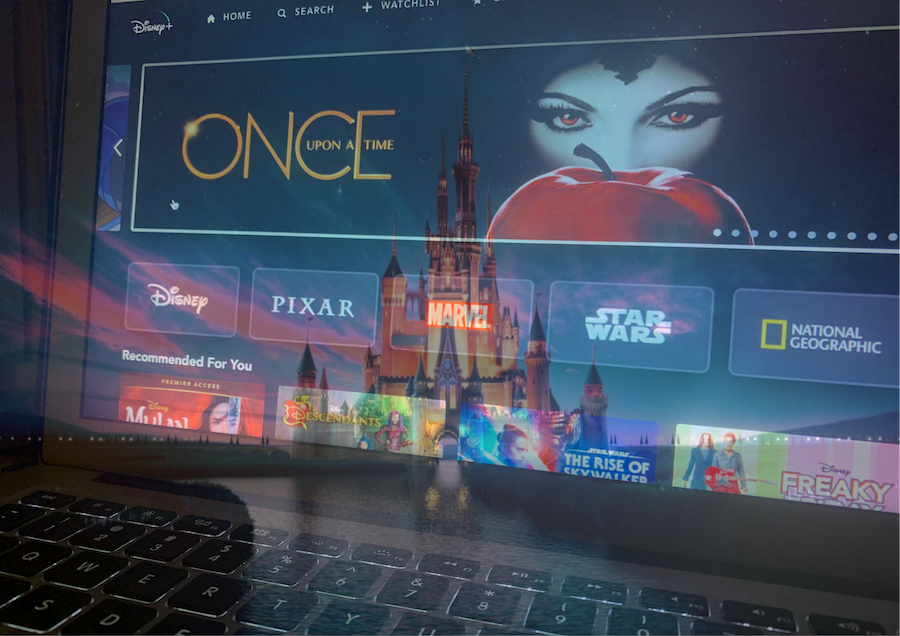 A whole new world of content was opened up to the world on November 12, 2019, with the launch of Disney+. This streaming service allows access to Disney, Pixar, Marvel, Star Wars, National Geographic movies and television shows. Along with Disney Channel original movies, shorts, documentaries, there is also a wide variety of original content made exclusively for the service.

Madison Rosenberger (’23) said, “I have been watching ‘Austin & Ally,’ ‘Jessie,’ and ‘Lemonade Mouth.’ I had not seen that much of ‘Wizards of Waverly Place’ before. I like how they have all of the classic Disney movies and shows, Disney original movies, and Disney XD shows.”

“I have been rewatching all of the classic Disney movies and my favorite Disney movies like ‘Ratatouille,’ ‘Tangled,’ ‘Beauty and the Beast,’ ‘The Little Mermaid’ and more! I was able to watch ‘Frozen 2’ and the new ‘Mulan’ film, thanks to Disney+,” said Alissa Pradera (’21).

For $6.99 a month or $69.99 a year, anyone can access Disney+ from their TV, mobile devices, computer, or game consoles. Seven profiles per account are permitted, allowing access on up to four devices at once. Parental controls can be enabled on kid profiles to ensure that only child-appropriate content can be viewed.

“I’ve had Disney+ for around a year, and I do think that the price is a little high, but I don’t expect anything less from Disney. I hope the prices will go down as time goes on. My family and I usually have movie nights every Sunday night, so we watch whatever old Disney movie we feel like watching that night. On my own, I’ve watched ‘High School Musical: The Musical: The Series,'” said Sabrina Pedregal (’22).

Lin-Manuel Miranda’s eleven Tony Award-winning musical, “Hamilton,” began streaming on Disney+ starting July 3. It was initially planned to be released in theaters on October 15, 2021, but was instead released digitally due to COVID-19. During the Fourth of July weekend, the estimated US downloads of the Disney+ app were 74% higher than the average over weekends in June. Reportedly, Disney paid $75 million for the rights to “Hamilton.”

Due to frequent release date changes resulting from COVID-19, the live-action “Mulan” was put on Disney+ Premier Access for a fee of $29.99 starting Sep. 4. However, the film will be free to watch on Disney+ in December. The film cost over $200 million to produce, but only grossed $57 million globally.

“I watched the new ‘Mulan’ film and absolutely loved it! At first, I was hesitant to watch the film since key aspects from the original like Mushu, well-known songs, and more weren’t going to be included, but I loved it so much! But I will say that the price to watch the movie was very high. I know many of my friends complained about the price and are waiting until it is released later on the site free of charge,” said Pradera.

There is also original content such as “The Mandalorian,” which won seven Emmy Awards and was nominated for 15. Other television shows included “High School Musical: The Musical: The Series,” “Muppets Now,” and more. The documentary, “The Imagineering Story,” featured a behind the scenes look at the development of Disney theme parks. “Artemis Fowl” and “Stargirl” were movies based around popular books from the early ’00. The widely anticipated seventh season of “The Clone Wars” aired on Feb. 21, releasing new episodes each week.

“Along with rewatching Star Wars movies and older Disney Channel shows such as ‘Hannah Montana,’ I enjoyed watching the ‘The Mandalorian.’ I like that I can access shows and movies that don’t air anymore on regular TV,” said Bland.

For Star Wars fans wanting more after the second season of “The Mandalorian,” an untitled Cassian Andor spin-off series and an untitled Obi-Wan Kenobi series were announced at the 2019 D23 Expo.

During the 2019 San Diego Comic-Con, the fourth phase of Marvel revealed to feature Disney+ original television series including “The Falcon and the Winter Soldier,” “WandaVision,” “Loki,” “Hawkeye,” “Ms. Marvel,” “Moon Knight,” and “She-Hulk.” The majority of the shows are planned to air in 2021, except for “WandaVision,” which should debut this year.

Author Rick Riordan announced that Disney+ would adapt a live-action series based around the five original “Percy Jackson & the Olympians” books. Riordan assured his fans that he and his wife would be involved with every aspect of the show. Not associated with the new series in development, “The Lightning Thief” and “Sea of Monsters” were feature films made by 20th Century Fox in 2010 and 2013. Both films are available on Disney+.

Various original animated shows are planned to air, including “Monsters At Work,” “The Proud Family: Louder and Prouder,” and “Star Wars: The Bad Batch.”

“I am really excited about the upcoming Monsters Inc. spin-off series ‘Monsters at Work.’ I think it will be so cute, and I honestly love the franchise so much,” said Pradera.