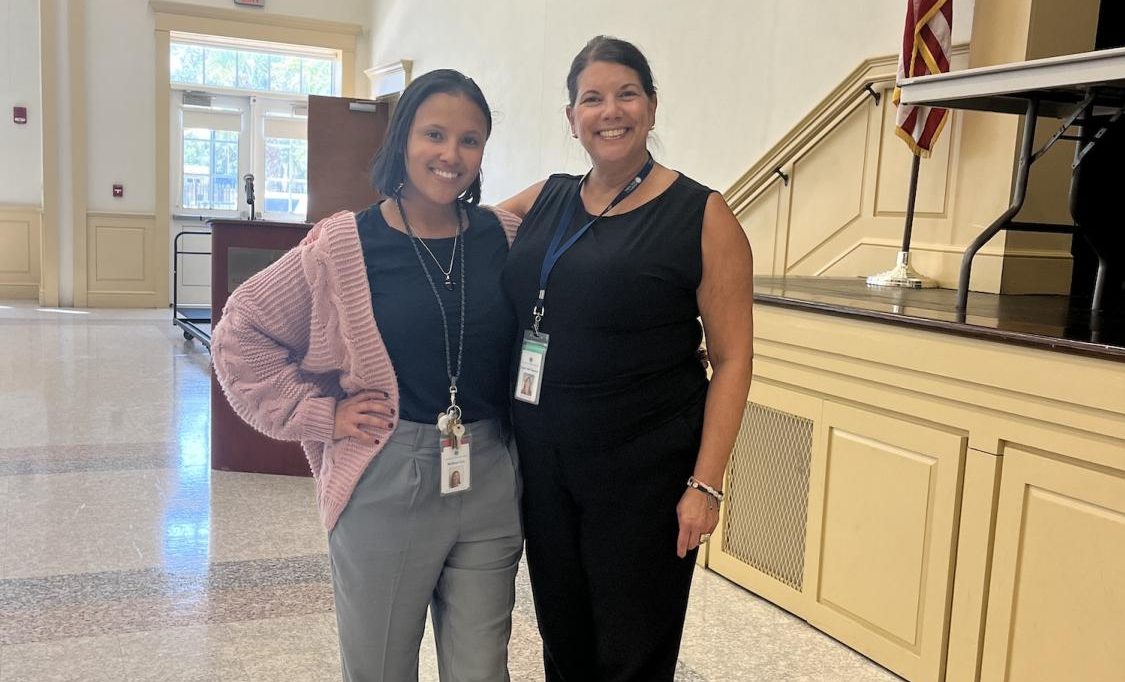 Melissa Cox and Jeane McNamara are working together to create an exciting school year for the students. (Photo Credit: Kinsley Warbritton/Achona Online)

Melissa Cox and Jeane McNamara are working together to create an exciting school year for the students.

This school year, the Academy welcomed two new key members of our administration.

Jeane McNamara took the role of our new high school Principal. McNamara came from Philadelphia where she was President and Academic Dean at two all-girls high schools.

Melissa Cox, a former member of the English department at Academy became our new Assistant Principal. Cox describes the relationship between the two as it is like “Mac and Cheese”. She says, “I think we both compliment each other well with the same sense of humor and I have already learned a lot from her”.

McNamara came to Tampa for this position because it was a wonderful professional and personal opportunity for her to continue as an educational leader while also being close to her family. McNamara admits she misses the wonderful students and staff she used to be with in Philadelphia and she wishes she could see the great programs that were put into place while she was in charge.

Luckily, since moving to Tampa and joining the Academy family, McNamara says, “the AHN community has been incredibly kind and welcoming in every dimension- the students, the families, the faculty, administration, and staff. I feel a strong sense of belonging, especially coming from similar schools that are devoted to the mission and vision of their founding order of sisters”.

Cox never anticipated becoming a part of the administration but ended up applying for the position last school year. When she was a teacher, there were a few things she wanted to see change in the school, and becoming a part of the administration gives her an opportunity to accomplish these things. While teaching classes and grading work all day is challenging, Cox says “being an assistant principal means from the moment I walk in my office in the morning till the moment I leave, I am always doing something.”

Both describe their leadership style as being deliberate, efficient, fair, and open-minded while McNamara adds that it’s important to “honor the order of those attributes, depending on the particular situation.” Using these attributes, McNamara’s main goal for the school year is to “infuse Academy with a strong sense of values that are central to the SNJM values and by using transparency and sisterhood to grow collectively”.

To make the next jump in our community, McNamara believes the stability that will be afforded us on the other side of the pandemic will go a long way to ensure that everyone can make an investment in making Academy a “gold-standard” school.

Through the eyes of a teacher, Cox wished to see more joy in the school since COVID took away some of the traditions we used to celebrate. Cox’s favorite traditions at Academy were the running of the halls and the seniors jumping in the pool, which are now being brought back into play. Another big change Cox wanted to install was to make teachers feel more appreciated.

However, with bringing back joy comes challenges. Cox has been receiving a large amount of feedback from students and staff members, the biggest one being about the uniforms. She says, “I can tell girls are trying to get their skirts to the right length and I am trying to be understanding”.