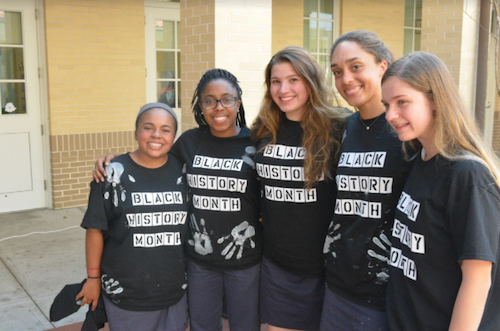 Senior Keri Kelly says, “This was important to me because one of the major goals of Black History Month since its inception has been to work on including the rich culture and history of African Americans into the U.S. narrative, and I feel like that is a part we still struggle with.”

On February 28, 2017, Academy of the Holy Names celebrated Black History Month by selling and painting shirts, listening to  a guest speaker, and watching performances by their fellow Academy students during lunch. The guest speaker in the morning was Clarence Fort,the grandfather of junior Nyla Jacobs and freshman Tress Jacobs. Performances during lunch included a song by Kahlea Armstrong, a dance by Jaed Seymour, Talia Sharrieff, and Isabella Leandri,  an acapella duet by Nyla Jacobs and Kahlea Armstrong, and a poem by Kaia Floyd.

The Black History Month celebration was organized by Keri Kelly and Lizzie Dolan. The two seniors organized it with the help of administration who were very supportive and the students at a Academy who were willing to share their talent and a piece of themselves with their AHN sisters.

Kelly says, “The fun day of festivities on Tuesday the 28th was the brainchild of Lizzie Dolan and I. It was very fluid; always changing as we planned it, but our main idea was just to have a cultural explosion. Poetry, song, dance, history, theatre; we just wanted to highlight talent at Academy that goes unnoticed.”

Kelly shared that this celebration was important to her because Black History Month was created to work on including the rich culture and history of African Americans into the U.S.’s story.

Kelly says, “Often African American culture is isolated as its own story, separate from the aristocrats and revolutionary heroes that we learn about in AP U.S. History, and I just wanted a chance to integrate it and share in its celebration together.”

Lizzie Dolan helped Kelly along the process of setting up the celebration at Academy.

Dolan says, “Keri was telling me that it was frustrating that so many people don’t acknowledge Black History Month, and this stayed in the back of my head for a about week, so I decided to text her to tell her that we should do something about it and the idea was born.”

Clarence Fort is a Civil Rights Activist and was Academy’s guest speaker on the morning of the February 28. He quit his position at the NAACP because they wouldn’t fundraiser a sit in with him. He organized his own sit-in in Tampa. He tried to get a job at Trailways Bus Service, but they would not give him an application for seven years. When he finally got an interview for them, he had to go to Miami for it. In the interview they interviewed him for eight hours and his wife for six hours. They eventually gave him the position and he became the first black worker for Trailways. He has written three autobiographies since.

The festivities continued on into lunchtime with performances of songs, dances, and poems. 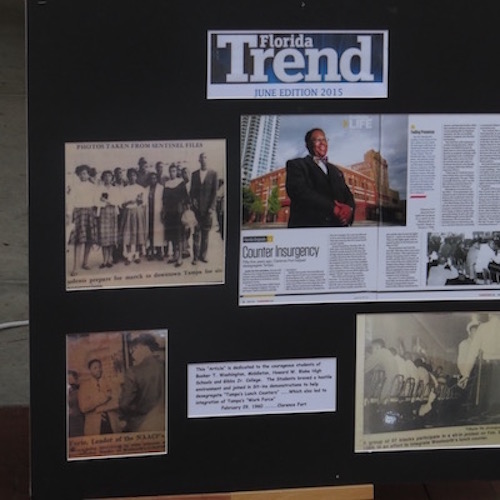