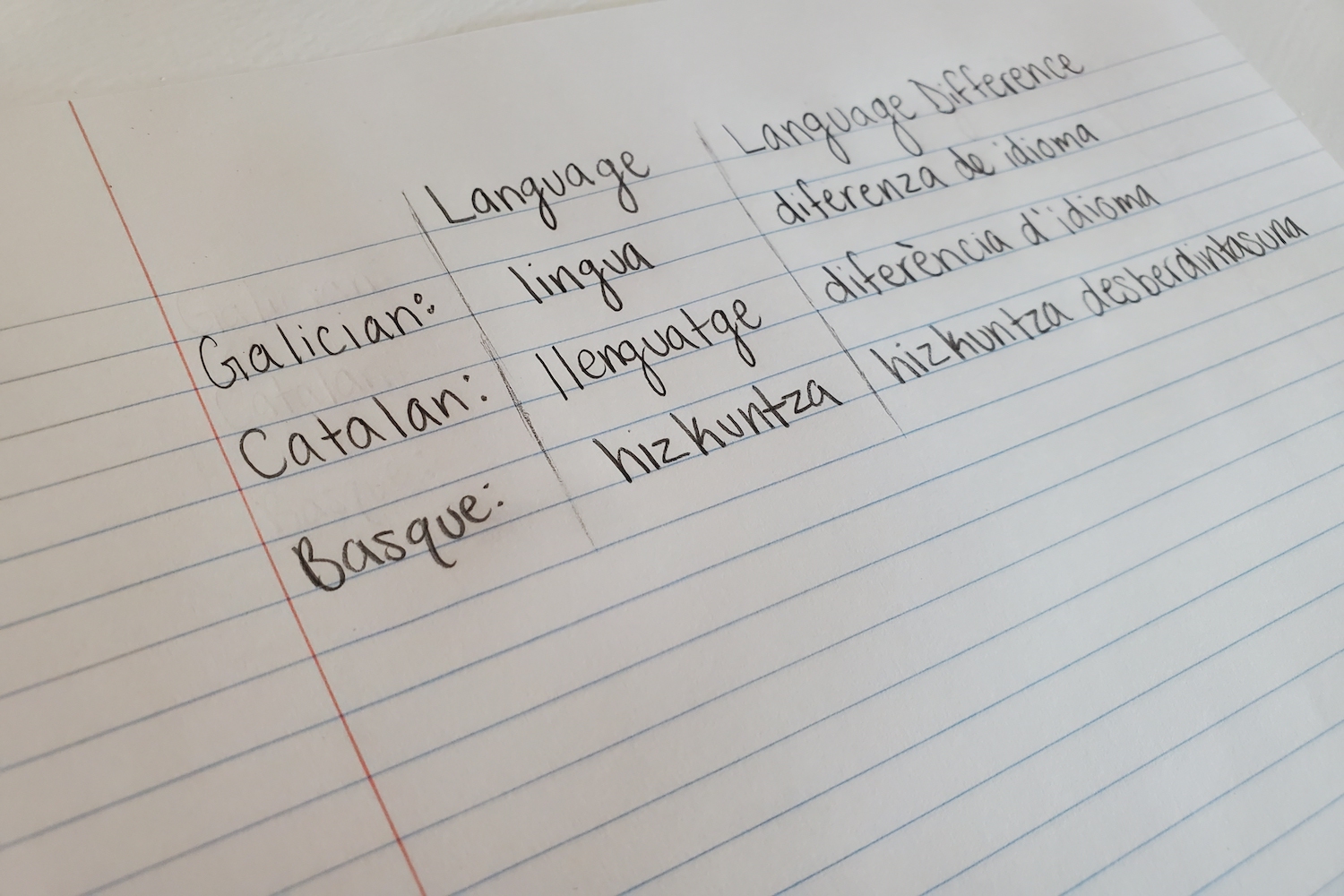 Spain has three regional dialects which are Catalan, Galician, and Basque. These dialects were oppressed during the dictatorship of Fransisco Franco. ((Photo Credit: Olivia Martinez/Achona Online))

Spain has three regional dialects which are Catalan, Galician, and Basque. These dialects were oppressed during the dictatorship of Fransisco Franco.

Have you ever been asked where your accent is from or why you say a word a certain way? If so, you most likely speak a regional dialect.

Merriam-Webster dictionary defines a dialect as “a regional variety of language distinguished by features of vocabulary, grammar, and pronunciation from other regional varieties and constituting together with them a single language. ” Though we may not realize it, the US is filled with different dialects, as well as other countries. In the US, we can recognize these different dialects by accents such as: southern, New Yorker, Boston, Chicago, and so many others. For Americans, dialects are seen mostly as accents and different ways of saying words. In many different countries, dialects are seen as full languages since they have literature and language differences. According to Fluency Corp, there are about 30 different dialects in the US.

Some of the most known US dialects are the “New Yorker,” the “Southern,” and African American Vernacular English because of the ability to recognize them easily. The “New Yorker” is characterized by dropping the letter “r” in words and replacing them with “h.” The “Southern” is characterized by dropping the “g” at the end of a word with -ing and also using longer vowels. African American Vernacular English, or AAVE, is often seen as unsophisticated, uneducated, and “ghetto.” However, this dialect was developed to unify the Black community who had lost connections with their cultures due to slavery.

There are pronunciations of words that are heavily debated around the country because of how differently people say them. Some of the most known words with different pronunciations are caramel, pecan, and crayon. The same thing can happen to names that can be said in different ways based on the way a person reads them. Your physical and social environment can affect how you pronounce certain words and name items differently than others.

“There are countless words that are pronounced differently. I think that a lot of it has to do with various regions. For instance, in the United Kingdom they may emphasize certain letters that Americans don’t. Although many believe that there is only one right way to say these words, there are numerous, alternate acceptable ways. I find this fascinating because it can reveal a lot about a person, such as where they were raised,” said Clare Grammig (‘21).

Dialects in the US are not seen as official languages, though in Spain, dialects are. In Spain, Spanish is referred to as Castilian to specify that it is the basic Spanish instead of one of the dialects. Not only are there different dialects within Spain, but there are also different accents for speaking Spanish in Hispanic Countries.

Catalan is the most widely spoken dialect in Spain, where it is mostly spoken in Catalonia and Andorra and is a romance language. Catalan is also spoken in other countries like France that share a border with Spain’s region of Catalonia.

Galician is spoken in the north-west region of Galicia and is also a romance language. It is a mixture of Spanish and Portuguese because it was formed during medieval times when Spain and Portugal were joined. Many people who speak Portuguese or Galician are able to communicate because of the similarities.

Basque, also known as Euskara, is spoken in the Basque Country. It is not related to any other living language, making it an isolated language. It is one of the oldest languages in Europe, even older than Latin.

These dialects were oppressed during the dictatorship of Francisco Franco that lasted from 1939 to 1975. He was a dictator who had ties to both Hitler and Mussolini. He wanted complete Spanish unity, including language. The Spanish dialects were banned across the country because Franco feared that people would talk behind his back. With the ban of dialects, streets and cultural landmarks were renamed, cultural institutions were closed, and libraries were not allowed to have books relating to the dialects. Propaganda was spread around the country saying, “If you are Spanish, speak Spanish,” to discourage the use of regional dialects and encourage unity.

“I have a lot of sympathy for the people who spoke these dialects under his dictatorship. While I can agree that a common language unites people, that should be a decision people should make themselves. They also shouldn’t be denied the ability to speak the language they know,” said Kaitlyn Lezama (‘21).

Despite Franco’s efforts, dialects were never stopped because people would speak them in their homes. Such an important part of Spain’s culture was preserved through the difficult times faced under this dictatorship. Though there are still troubles faced due to his effect on Spain, like exhuming his body and moving it in 2019. His body was buried in a monument called The Valley of the Fallen alongside the remains of 33,000 people who died during the Spanish Civil War. As NPR reporter Lucia Benavides says, “The place [Valley of the Fallen] is seen by many as an homage to fascism built under Franco’s direction by thousands of his political prisoners over the span of almost 20 years.”

There was a legal battle against his grandchildren, where it was ruled that his body would be exhumed and moved. Historian Cadal Sole said that it is an “important symbolic gesture,” but there was more to be done after exhuming his body. Sole says, “The monument still holds the tomb of Jose Antonio Primo de Rivera, founder of Spain’s fascist political party, as well as the mass grave of the unidentified thousands who fought against Franco’s regime.”

After Franco’s death, Spain’s dictatorship was converted into a Constitutional Monarchy by former King Juan Carlos I. Now, in Spain’s constitution, it says that everyone must know Castilian, but the dialects need to be preserved. It is appropriate to speak to authorities in your dialect, learn it in school, and have road signs in the dialects all across Spain. In 2005, the dialects were given the status of semi-official EU languages. The only other dialects to receive this status are Scottish Gaelic and Welsh.

Though the dialects are no longer considered endangered, they are still fighting to reverse the effects that Franco had on regional cultures. These dialects and cultures emerged from Franco’s reign intact and ready to build themselves up again. It is very important to preserve our language differences to continue growing our cultures. We should also celebrate our language differences, because of their importance to our communities.