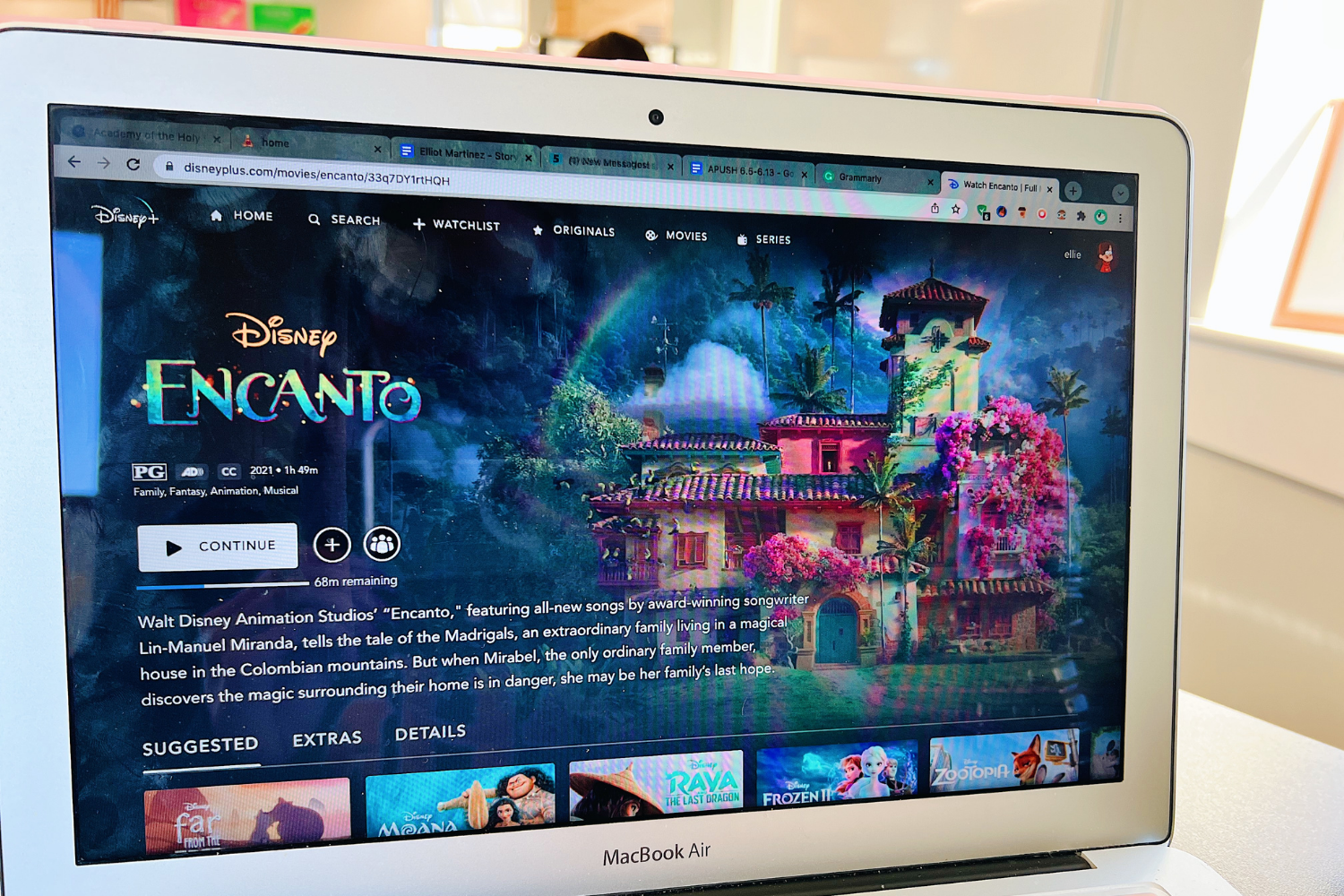 Encanto can be enjoyed at any time on Disney Plus. ((Photo Credit: Ellie Martinez/Achona Online))

Encanto can be enjoyed at any time on Disney Plus.

On December 24, 2021, the magic of Christmas Eve only grew brighter as Encanto, Disney’s latest animated film, was gifted to Disney Plus members across the world. Disney’s Encanto, having arrived in theaters on November 24, 2022, has already amassed numerous fans and earned the love of many. Encanto remains the 60th addition to Walt Disney Animation Studios’ productions: a magical, adventurous, and fun studio augmentation.

Hit it! 🎵 The family movie event of the year is now streaming on Disney+! Watch Disney's #Encanto now. pic.twitter.com/5khHLlslV0

Encanto, directed by Byron Howard, Jared Bush, and Charise Castro Smith, tells the story of a magical family living in the beautiful and vibrant paradise of Colombia. The magical Madrigals, living in an equally magical home in their close-knit town called Encanto, are blessed with a unique fantastical ability in each child. However, one child sticks out among the rest. Mirabel Madrigal is the only Madrigal not blessed with a magical gift. Yet, with the Encanto and the Madrigals’ blessing in danger – Mirabel finds she is more than just the child without a gift.

Encanto, adored by both Disney fans and critics alike, was nominated and awarded the 2021 Best Animated Feature Film Golden Globe Award. Additionally, the music included within the film has been widely acclaimed. The Encanto Soundtrack recently reached the No. 1 spot on the Billboard 200 Albums Chart — with the help of famed Lin-Manuel Miranda writing the film’s musical attributes.

The most significant aspect of Encanto’s increasing admiration is its celebration of Latin culture. Encanto meaningfully portrays the mythical experiences of a multigenerational Latin family engrossed in the vibrancy of Colombian culture, music, family dynamics, community, and settings.

Within Latin families, familial bonds are of the utmost importance. Mirabel, despite her isolation, loves and appreciates her family for all that they do. Each family member is portrayed uniquely, and the close bond of Latin familial members is felt among both their conflicts and successes with one another.

In the mountains of Colombia, Encanto portrays Colombian culture within their community and setting. The town of Encanto is vibrant and lush, surrounded by flourishing green mountains and filled with high-climbing palm trees. Encanto and the Madrigals’ magical home within Colombia, Casita, is a driving character in the story. The film embraces Colombian landscapes both within and outside of Casita, with bright and vivid colors — as existing in Colombia’s rainforests.

The Madrigal family contains a wide variety of skin colors and ethnic features — proving the time and thoughtfulness that went into the creation of each Madrigal, as Latin families are often a conglomerate of different races. This accurate representation of Latin families within Encanto was vital to its success as a film and as a progression of cultural representation, and it succeeded in both aspects.

2-year-old Kenzo Brooks’ sweet reaction to seeing his lookalike in @EncantoMovie filled us with so much joy that we surprised him and his family with a free trip to @waltdisneyworld!@DisneyAnimation@DisneyParks#Encantohttps://t.co/5J4YCIP9cK pic.twitter.com/C6XalgSgnB

Cultural representation within children’s media is arguably one of the most significant aspects of the modern world. In recent years, the depiction of underrepresented groups in youth entertainment has increased.

Young children globally experience much of what they know through film and other forms of entertainment media. Many of humans’ first lessons or vital understandings as an individual stem from what they consume through media. Children constantly look to their favorite movies, and when they do, all deserve to receive the message that they are loved and accepted, no matter what they look like or how they live.

When children see themselves represented on screen in their favorite films, they feel seen and their self-confidence and self-worth grow as a result. For children watching who aren’t within the group represented, their growth as individuals is just as significant. All children who engage in culturally diverse media increase their awareness and appreciation of diverse beliefs and cultural backgrounds.

AHN Junior, Sophia Sweezey, recently saw Encanto and has been an avid fan since.

“Encanto is one of the most special movies I’ve seen in a long time. It was so colorful and bright, and the songs were my favorite part. I felt connected to the story and its culture, and I can’t wait to watch it again soon,” says Sweezey.