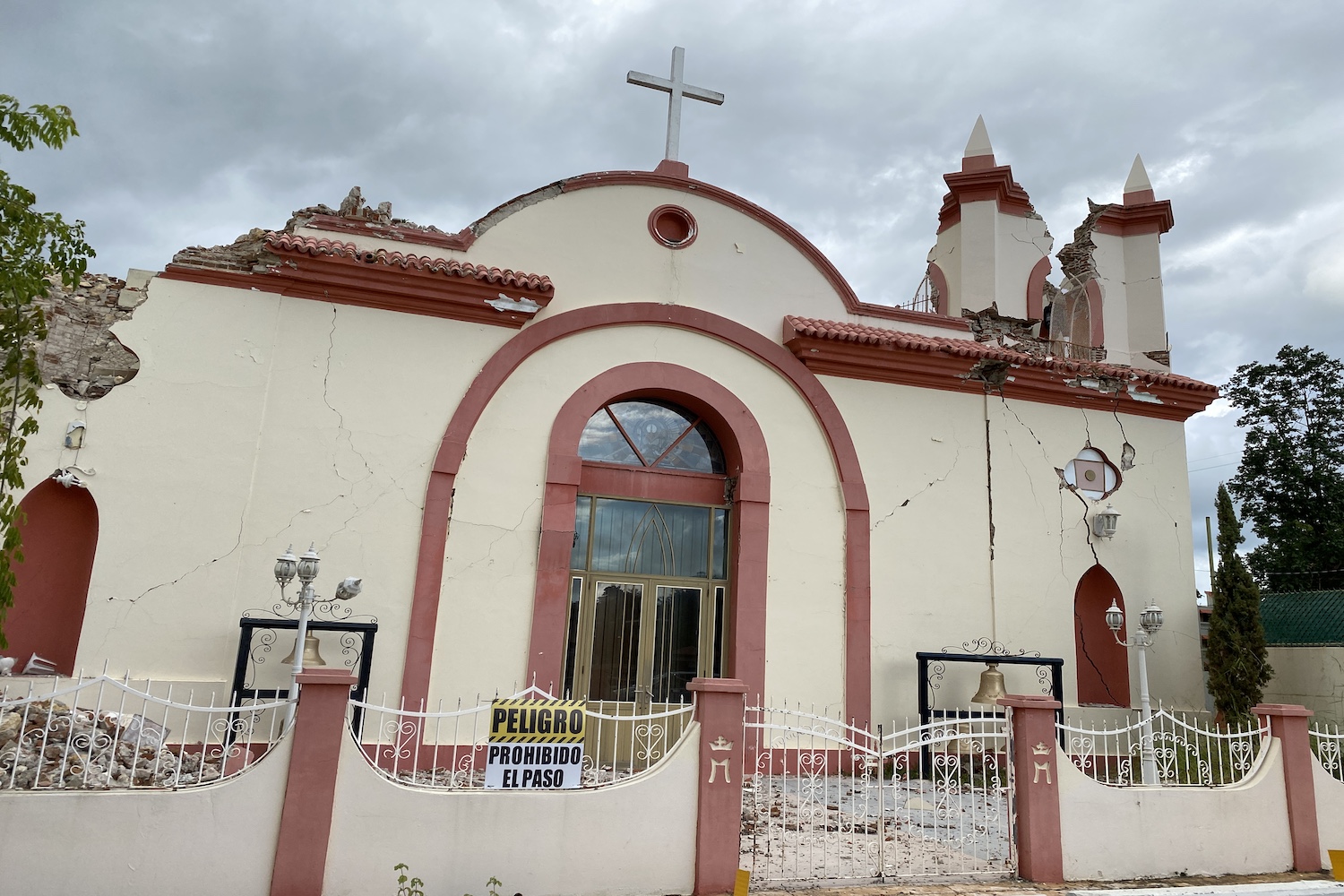 This historic building is Iglesia Inmaculada Concepción, which was founded in 1833, but destroyed by earthquakes. ((Photo Credit: Adriana James-Rodil/Achona Online))

This historic building is Iglesia Inmaculada Concepción, which was founded in 1833, but destroyed by earthquakes.

Cracks in the walls and destroyed buildings are occasional and frequent sites for the habitants of Ponce and Guyanilla in Puerto Rico — where I visited my family this past Christmas break. Driving through the city centers, I captured photos of the untouched, un-fixed ruin of historic buildings such as the Museo de Arte de Ponce and Iglesia Inmaculada Concepción that were damaged after the earthquakes that shook the island in December 2019 and January 2020 — the M 6.4 on Jan. 7 having a grave impact. 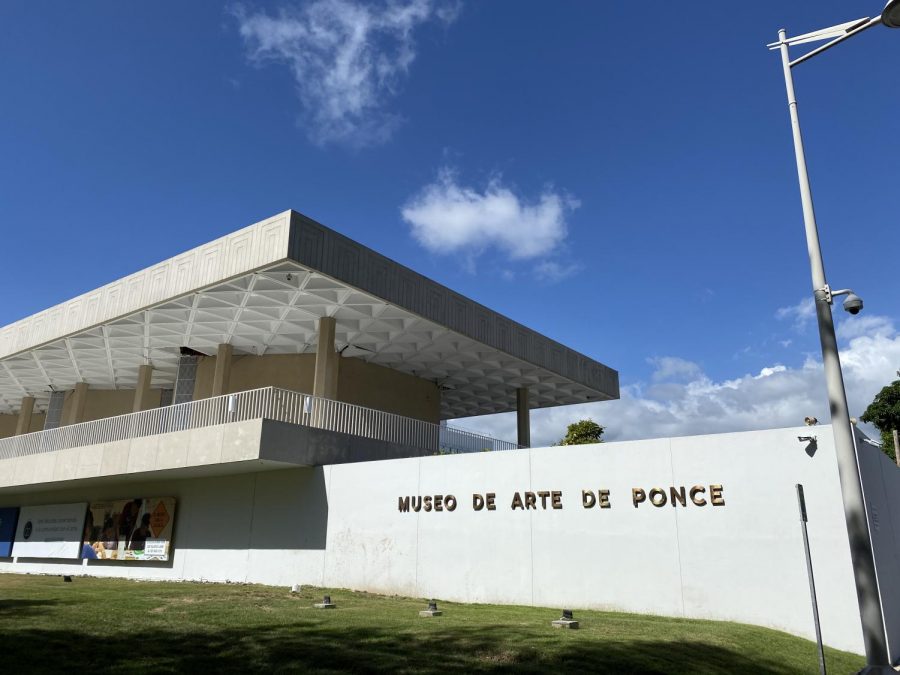 Gallery|6 Photos
(Photo Credit: Adriana James-Rodil/Achona Online)
This is the Museo de Arte de Ponce which first opened in 1965, but the earthquakes left the Durrell Stone and Annex buildings damaged.

Yet, although Puerto Rico continues to endure earthquakes — such as the M 3.1 located 4 km WSW (west-south-west) of Fuig that took place on Jan. 25, 2021 — the island-shaking devastation that occurred a year ago is still evident by the conditions of its infrastructure that has failed to have been addressed.

Spanish Teacher Diana Rodriguez said, “I know some people there are lacking a lot of basic resources. For a long time after the hurricane, they didn’t have electricity and water. They [also] had the basic need for food because they didn’t have the infrastructure that was cut out to deal with all these natural disasters. I think they had a humanitarian crisis right after the hurricanes and the earthquakes, and they didn’t have a quick response from the government. But I think it is not a humanitarian crisis at the moment, in my opinion. I think it’s just a lagging period where they have to recuperate from a disaster, and it takes time. And with the pandemic, things are worse getting worse.”

Puerto Rico’s infrastructure crisis, however, is not due to the earthquakes alone, although perpetuated by them because, in 2019, the island received a D-minus GPA in its 2019 Puerto Rico Infrastructure Report Card. As well as the overall score, the report also graded eight categories within infrastructure: bridges, dams, drinking water, energy, roads, solid waste, and wastewater. Energy received the lowest score — although none surpassed a D+ — with a F. Although Hurricanes Irma and Maria in 2017 are a cause of the failing energy infrastructure, the Infrastructure Report Card states “the existing grid was already in disrepair and experienced frequent outages” prior to the natural disasters.

So, the question remains — why?

The United States, is fighting for equality and . . . democracy and yet you get it in your own backyard — the oldest colony, with more than 120 years without allowing Puerto Ricans to vote for president, to vote in Congress or to even have federal laws apply equally to American citizens on the island.”

To provide some background context, Puerto Rico, along with Guam and the Philippines, became a part of the U.S. after the Spanish-American War in 1898. However, it was not until the 1900 Foraker Act that “after two years of direct U.S. military rule,” Puerto Rico became a civilian government and territory with a non-voting representative in Congress, but not until 1917 were Puerto Ricans granted citizenship status. In 1947, Congress gave Puerto Ricans the power, for the first time, to elect their own governor which paved the way for its adoption of their own constitution in 1952; it stated that the island is a commonwealth of the U.S. with the capability to independently elect its governors and decide its affairs. However, as a result of Article 4, Section 3, of the U.S. Constitution, Congress still has “broad authority to govern U.S. territory.”

And although Puerto Rico is a part of the U.S. it is, nevertheless, unique from it due to their strong nationalism, lack of political representation in Congress, and inability to vote in general elections; but they are still subject to federal laws and are “eligible for military subscription.” The island is represented by a resident commissioner, but he or she does not have the ability to vote.

Yet, Puerto Rico is not economically independent as its currency is the U.S. dollar; its people must pay federal taxes (but they do not pay an income tax and also have other tax exemptions); and “U.S. laws dictate trade policies.” These tax exemptions have resulted in less federal money given to Puerto Ricans for programs like Social Security and aid for veterans and their ineligibility “for the Earned Income Tax Credit.” However, a district court judge ruled in August 2020 that it is unconstitutional to prohibit access to federal assistance programs such as Supplemental Security Income to Puerto Rican residents, which caused the federal government to appeal.

Subsequently, the island has been in an economic recession for 14 years which has resulted in a decline in the population by 16% and their debt to reach, in 2017, $123 billion. Moreover,  in 2020, the average Puerto Ricans’ household income “was about one-third of the U.S average,” and its unemployment was twice as great as the U.S. national average.

The COVID-19 pandemic has only served to further perpetuate the island’s economic crisis as it reported an unemployment rate of 23%  in mid-June — which made it the largest in the U.S. — and officials predict that its economy will decrease by four percent.

Puerto Rico’s current financial crisis is rooted in a combination of “twentieth century legislation that encouraged Puerto Rico’s reliance on debt to fill federal funding gaps,” the Internal Revenue Code Section 936 that “allowed American businesses to operate tax-free in Puerto Rico,” the 2008 recession, leaders not spending the billions they borrowed towards infrastructure, natural disasters, and people migrating to the mainland U.S. Each event has built upon itself and has led to the inevitable: now, more Puerto Ricans live in the mainland U.S. than in the island itself, and its population is predicted to decrease by eight percent by 2024. However, there are still many who would rather stay in the island despite its financial crisis.

Samantha Davis (’22) has family living in Puerto Rico. She said, “They [my family] have not thought about migrating to the mainland because they’re actually happy there. They just love the environment around them because they live in the country, so there’s not many people around them. Also, my family all live within a certain amount of space between each other, so they’re happy and love each other, so they just stay there. It’s definitely due to [a nationalistic pride] for being Puerto Rican. They love the culture there. Right now they can’t because of COVID, but [normally] they do go out in their community and have fun with their neighbors.”

No taxation without representation!!!*

*Unless you live in the District of Columbia, Puerto Rico, American Samoa, the US Virgin Islands, Guam, the Northern Mariana Islands, or are an American living abroad

And the options for dealing with its debt crisis are limited as it cannot ask for funds from the International Monetary Fund, and it cannot “file for Chapter 9 bankruptcy,” as Detroit has done, for example. And the pandemic has stalled any aid the island would receive from the Puerto Rico Oversight, Management, and Economic Stability Act (PROMESA) that would have decreased its debt.

There are proponents for statehood, such as the New Progressive Party, which would allow it to better deal with its financial crisis and grant full-citizenship to Puerto Ricans — thus allowing for $1.7 to $5.4 billion more in federal programs, such as Medicare and Medicaid. Yet, the Popular Democratic Party believes that Puerto Rico’s status as a territory should remain as it currently is, while others vouch for an enhanced commonwealth, independence, or free association.

“A lot of my family, after the hurricanes, moved to Florida because their houses were destroyed, and they don’t want to go back [to Puerto Rico] which is very sad. Many, I think, are being pushed out of their homes right now because of natural disasters, and the government is not doing much to help them. My family thinks that Puerto Rico should be partially independent — still be a part of the United States and have the rights of U.S. citizens but not be a state in order to preserve its culture.” said Angélica Fogarty (’22).

Puerto Ricans have directly voted on whether it should become a state six different times, the last time being in November 2020 when more than 52% of people voted in favor of statehood (but only about half of eligible voters participated, but that was a 23% increase since 2017).

Congress refused to consider the island for statehood in 2012 and 2017 due to voter turnout and disputes regarding the format of the question. Despite the majority of those who voted being in favor of statehood and the current resident commissioner, Republican Jennifer González, pledging to work with President Joe Biden on the matter — Political Scientist and Researcher Carlos Vargas Ramos doubts this new referendum will have a different effect on Congress than in the past. Because only 1.2 million of the 2.3 million eligible voters answered the referendum question, he suggests an already reluctant Congress will have an issue with the voter turnout.

Ramos Vargas added that, “Because there hasn’t been a conclusive plebiscite in Puerto Rico, that indicates convincingly that Puerto Ricans favor one option over another, the Congress of the United States can continue kicking the can down the road.”

Moreover, beneath continuous claims from members of Congress regarding the validity of the referendum results lies a deeper truth — many are afraid of how Puerto Rico becoming a state, and therefore having representatives, could potentially cause a rift in the balance of power as it would have two senators and up to six representatives in the House.

Members of Congress have displayed, yet again, their tendencies to place political implications over Puerto Rico’s economic crisis.

The adoption of Puerto Rico as a state is unlikely until more eligible voters vote on the referendum, but the Biden administration has announced “The Biden-Harris Plan for Recovery, Renewal, and Respect for Puerto Rico.” In the plan, Biden pledges to establish a federal working group that will report directly to him on the state of the island’s “resources and technical assistance.” Also in the plan includes “Supporting a full recovery and infrastructure reconstruction to modern standards. Investing in Puerto Rico’s future through economic development initiatives and support for families. Providing relief from unsustainable debt. Expanding access to education and workforce development.”

As I wrote in 2020, “Puerto Rico is a very small, but strong island,” and yet, its people can only remain strong for so long until people begin to leave as its decreasing population has demonstrated. I fear that if action is not taken soon in order to revive Puerto Rico from its financial crisis — either in the form of it becoming a state or the implementation of Biden’s plan — buildings will continue to be in ruin until there is no one left to see them.

Spanish Teacher Micky Stagg, who also has family in Puerto Rico and the mainland U.S. said, “A few of my relatives have come here [the mainland]. They came here many years ago because of the corruption, but some of them have stayed just because it’s their home — after Cuba that’s where they went — even though they recognize there is corruption. Especially after Hurricane Maria, they saw a lot of contracts going to specific people, a lot of the work wasn’t done correctly. The U.S. government’s funding was mismanaged, again, because of corruption. Are they willing to leave? I don’t know, and I think they’re ambivalent about statehood too. I think they want their autonomy, but on the other hand, they think they would have a better infrastructure and more support from the U.S. government, if they were a state.” 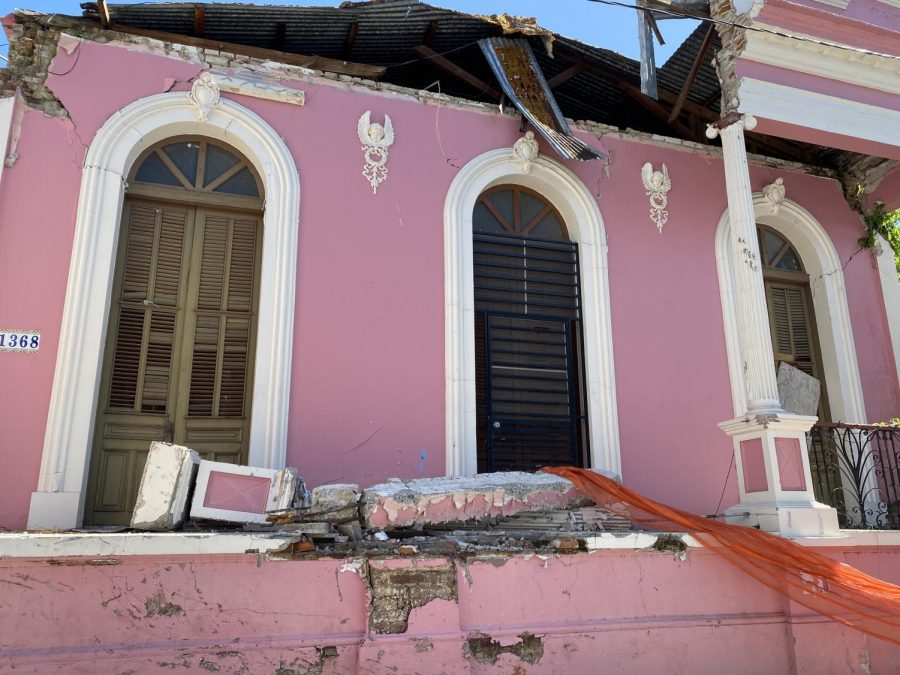