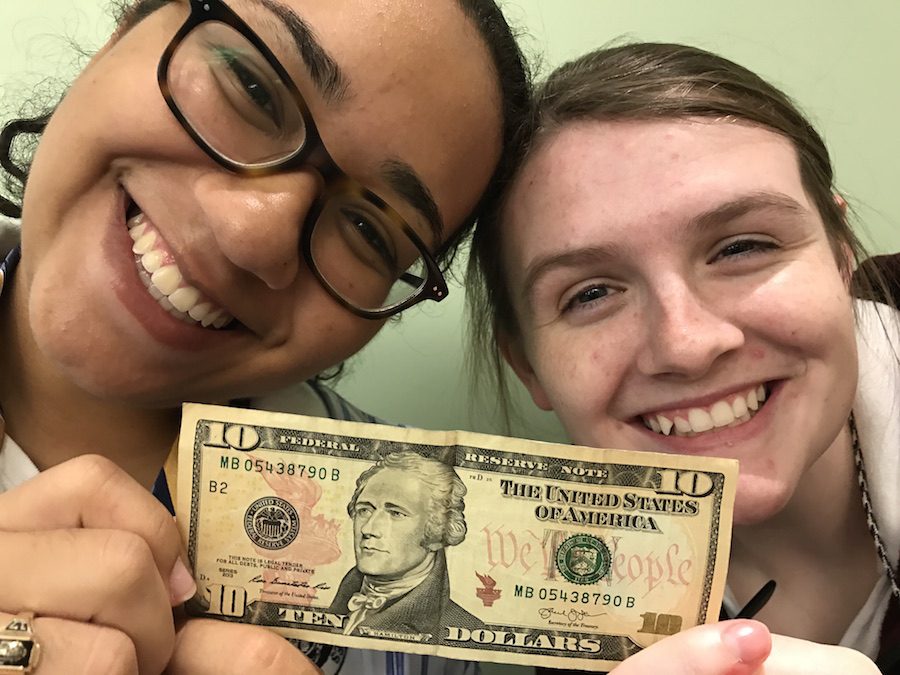 The ten dollar founding father without a father got a lot farther by being a lot smarter, by working a lot harder, by being a self starter. Photo Credit: Shannon Flaharty

On January 20 of 2015, the world turned upside down when Hamilton hit the stage for its off-broadway premiere at The Public Theater. Lin Manuel Miranda had been working on the play for a total of five and a half years and on February 17 the play officially opened. Producer Jeffrey Seller claims that he has never in his life witnessed a musical that has penetrated the American culture faster than Hamilton. Now showing at the Richard Rogers theater in New York, Hamilton remains one of the hottest shows on Broadway, with tickets going at a rate of at least $700. Due to its great success, PBS recently did a special on the play, going behind the scenes of its research and writing process. Below are 15 previously unknown things that this documentary taught us.

In 2008, Miranda was on vacation from his show, In the Heights, when he came across a biography about Alexander Hamilton. He found the book deeply moving and personal and states that, as he was reading it, “hip hop songs started rising off the page.” While still doing eight shows a week for In the Heights, Miranda worked on a song strictly about Hamilton’s childhood. In 2009, the White House called Miranda, asking him to perform a song from In the Heights, and he instead performed his song about Hamilton. Miranda’s performance went viral and he then realized that he could make an entire show out of it. Miranda kept writing and, a year later, had completed only one more song.

Miranda grew up in the 90s and considers the time a golden age for hip hop. He also admits that when he was writing Hamilton, he listened to Takeover by Nas on loop.

John Weidman stated that, “You reach a point where the research is over and you then invent the character who actually existed in history.”

For example, Miranda used this information when incorporating King George into Hamilton.

While it doesn’t technically make sense for King George to be a character in Hamilton because he was all the way across the sea during these events and never even met Alexander Hamilton, “giving him these moments throughout the show robs the American revolution of its inevitability.”

Arguably one of the most interesting things revealed in the documentary is that Miranda intentionally created unique rap styles for each character in the musical. For example, George Washington raps in this very metronomic way because he similarly thinks with everything on beat, whereas, because Lafayette has to figure out english, he begins at a simple, early 80s rap cadence, but by the end he’s doing crazy double and triples.This can be seen again in the musical when Thomas Jefferson returns from France and sings a very jazzy solo. This was also intentionally and very specifically planned to signify that, because Jefferson was gone for so long, he does not realize that the rest of America has moved onto rap while he is still singing jazz.

Miranda acknowledges some actors who completely feel in character the second they get the costume on, however, he admits that he is not one of those people. Miranda states, “I do know that my posture certainly changes when I’m in the clothes, but it really doesn’t start for me until I see everybody else in their costumes and you get that moment of community where we’re all agreeing to just create this world for people.”

Miranda’s father, who left Puerto Rico at the age of 18 to study at NYU claims, “In my experience, immigrants are never the lazy ones, they’re not the stupid ones; they’re the smart, hardworking ones because they have to work so much harder to make sense of their reality and succeed in that reality.”

Lin-Manuel Miranda and his dad at the premiere of #HamildocPBS in NYC. Perfect. pic.twitter.com/e7mQgwXgzW

With seven months left until opening night, Miranda’s apartment was finally ready to be unpacked, his infant child had just turned two weeks old, he had basically completed act one, and it was at that same time that he was writing “Yorktown,” a song in which Hamilton realizes that he has just one more battle to fight until he can go home to be with newborn son and wife. Miranda, having been in the final stages of completing Hamilton and also waiting to spend time with his wife and newborn son, states that “Hamilton, in that moment, is exactly where I’m at in my life right now.”

Because events in the play took place so long ago, audience members may find it harder to relate to the characters, however, one of the main goals of the cast members was to take down some of those barriers in order to allow reflection to be more true. In fact, Miranda specifically states that one of the things that they really tried to do with the play was show all of the characters as flawed. For example, Christopher Jackson, who plays George Washington, states that he tried to make peace with the fact that Washington had slaves, but after standing in the actual slave quarters, he realized that there never would be any way to reconcile it. Jackson realizes that there is nothing he can do to change these things, nor was there anything in his portrayal that suggests any sign of forgiveness of them. In summary, Senator Elizabeth Warren states, “These are deeply flawed people, but they made contributions and this means that we have to acknowledge that so much of what we have today was built on the backs of people whose contributions never get acknowledged.”

Oskar Eustis, artistic director at The Public Theater, boldly compared Miranda to Shakespeare, supporting the claim by stating that, “By taking the voice of the common people, elevating it to poetry, and nobeling the people themselves, Lin is doing exactly what Shakespeare did in his history plays.”

*Lady rolls down her car window at 181st street*
"congrats on HAMLET!"
Me: "I WISH I wrote Hamlet!"
Lady: "Yay HAMLET!"
*drives away*#myday

In their research, the cast visited a lot of historical landmarks such as their character’s actual burial site, the house that Hamilton and his wife lived in their later years, Mount Vernon, Washington’s bedroom, Valley Forge, the Morris Jumel Mansion dining room (where “Cabinet Battle #1 would have actually taken place). One thing that the cast found extremely interesting about some of these landmarks was that a lot of people don’t actually know that they took place there. Even Miranda states, “These blocks that I’ve passed all my life have all along been these incredible sources of rich american history. I don’t think a lot of people know that. We think of the founding fathers in some room in Philadelphia but they were actually right here, they were uptown.” Christopher Jackson also believes that visiting these sites helps fo the actors to connect with their characters, sharing, “It’s rare that you do a show where you have so many literal touchstones, places that support the research that you’ve done. It helps keep the fire burning, being able to imagine yourself in a very real way.”

In addition to all of the previously listed landmarks that the characters visited, Aaron Burr’s bedroom also played a large role in this stage of Miranda’s research, as he actually wrote some of Hamilton in it. Miranda admits that he sat on the floor or in a new chair for most of this, being careful not to sit on the colonial furniture. Miranda states, “It’s pretty amazing to be in the space where he was in the later part of his life. Talk about artists in residence, literally.”

Before Hamilton, if you had asked any random person who Alexander Hamilton was they probably would not have been able to tell you. Even now though, a lot of people still don’t know that, in addition to being George Washington’s chief of staff during the Revolutionary War and our first treasury secretary, Hamilton created America’s first budget system, the first tax system, first customs service, first coast guard, first monetary policy, and the first central bank.

Miranda states that, “Eliza wanted Hamilton to be known for his political acts, so I recast that burning of the letters as an act of anger and acknowledgement of betrayal.”

In that time period, women were assumed to have a certain role, and because Angelica somewhat broke that stereotype, Miranda credits her with being the smartest person in the play. Considering this, Renee Goldsberry, who plays Angelica, stated that, “what she can do with her pen and what she could probably do with a look was very very potent and probably had to be.”

The cast only had one week to learn the choreography, staging, and lyrics of all 52 songs, not including the ones that haven’t been written yet.