How to Prepare for the Gilmore Girl Reprisal 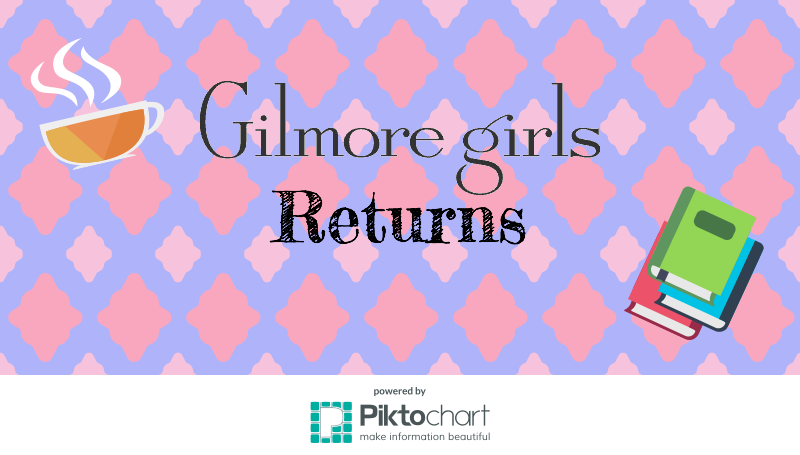 November 25 is just around the corner, and Gilmore Girls fans have exceeded a normal level of excitement.

Senior and avid Gilmore Girls fan Ally Pazzi exclaims “I’m most excited to see how the writers will show Rory’s transition from young adult into an adult, who Rory ends up with (out of all her boyfriends), and how all the other characters are doing and what they’ve done with their lives.”

With the release of the reprisal rapidly approaching, there is so much to do to prepare.

Senior Kendall Perez shares the most important thing to do in preparation for the reprisal is “first off, watch every episode. Then, emotionally prepare yourself because you’re probably going to cry.”

my boss came over to talk, I told her I was watching the new Gilmore Girls trailer and she said "oh that's important, I'll come back later!"

For fans who watched the show live, it has been roughly nine years since the series finale. Since then, so many incredible shows and movies have been released that it is inevitable to forget some iconic moments from the show.  One of the most important things to do before the reprisal is to rewatch Gilmore Girls, or at least the most important episodes. Take a break from school work and extracurriculars, sit down, and reminisce about some of Stars Hallows best (and worst) moments.

Read a book off of Rory’s best reads

This is a two for one deal, especially for those looking for a new book. With nearly 339 books referenced throughout seven seasons, everyone is bound to find a classic that meets their interest. Many websites have an ongoing challenge for reader’s to see how many of Rory’s must-reads you can read. Not only is this a great opportunity to sit back and read a great book, these novels also give some insight into the references made by Lorelai Gilmore, Rory Gilmore, and even Jess Mariano.

Featured in nearly every episode of Gilmore Girls is the iconic Luke’s Diner. On October 5, in celebration of the sixteenth anniversary of the premiere,  fans of the show got to experience Luke’s diner at local coffee shops around the nation. In case fan’s weren’t able to experience the pop-up shops, there is an entire website dedicated to the diner. Featured is what the menu would resemble, including items such as omelets and pancakes. Taking a look at the menu can provide some great breakfast inspiration for those who feel like experiencing Luke’s Diner before the premiere.

Watch the Yale vs. Harvard game

College football season is clearly in full swing, however on November 19, take time away from SEC and ACC and spend Saturday enjoying some ivy league football. The much anticipated, at least for the Gilmore family, Yale vs. Harvard game is just six days before the premiere of the reprisal. As fans can recall, episode nine of season four gave viewers a glimpse into the Gilmore’s traditions on the day of the big game. Take some inspiration from Richard and Emily, grab your blue and white, and make sure to catch the game at 12:30 pm.

The backbone of Gilmore Girls is the Friday night dinners at Richard and Emily Gilmore’s home. [SPOILER] Without those dinners, Rory would have never been able to attend Chilton, yet alone Yale. At the same time, these iconic dinners allow fans to get an insight into what Lorelai’s childhood was really like. Step into Rory’s shoes on Friday and spend some time eating dinner with your grandparents.

Get multiple types of takeout

When they aren’t spending time at Richard and Emily’s, Rory and Lorelai are spending time at home enjoying some classic films, and most importantly, take out. Luke Danes constantly mocks the Gilmore girls’ eating habits, however, it has never stopped them. With plenty of amazing takeout restaurants including Pei Wei and EATS! American Grill, there are enough options to spend the entire day eating out similar to Lorelai and Rory.

Go to an antique store

Ms. Kim’s antique store is a hot spot in Stars Hallow. Many recognize the shop because it’s where Dave Rygaiski professed his love to Lane, it’s Lane’s home, and it was the original home of the furniture located in the Dragonfly Inn. The Other Side Antiques and Seminole Heights Antiques are just two shops located in Tampa to experience shopping in Ms. Kim’s.

Spend some time with your mom

Rory and Lorelai Gilmore easily are the most iconic mother-daughter duo in television history. The two are nearly inseparable, even after Rory moves out and moves on to college. They support each other through thick and through thin and are each other’s best friends. Especially for the seniors, now is a great time to take a moment to spend some time with your mom. Grab a bite to eat, watch a movie, and fill each other in on whatever is going on in life. As proven in the show, there is no other friend better than a mom.

Senior Ally Pazzi shares “It comes out the day after Thanksgiving, so I will be preparing by stuffing myself with as much food as possible, and not doing anything at all except watching TV.”

Grab a computer (and a book), get some takeout, and get coffee (lots of it) because it’s officially time for Gilmore Girls.