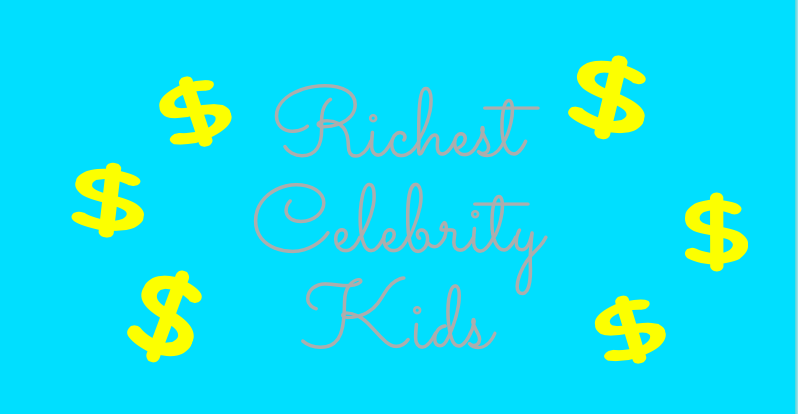 Celebrity kids are lucky enough to be living a life filled with the nicest things from diamond encrusted Barbie dolls to huge , extravagant birthday parties.

Have you ever wondered what your life would be like if you were the son or daughter of a celebrity? These kids who are in the public eye from the time they are born are living quite a ritzy lifestyle. Every child’s dream is their reality when it comes to exotic trips, designer clothes, extravagant birthday parties, and outrageous gifts .

Here is a list of some of the richest celebrity children today.

Suri Cruise’s father, Tom Cruise, has a networth of $450 million, and her mom, Katie Holmes, has a net worth of $25 million. Suri’s parents have provided her with a shoe collection that is worth $150,000 and a full closet of the nicest clothing. For her fifth birthday, Suri’s parents allowed her to spend $20,000.

Actors Brad Pitt and Angelina Jolie, who are worth a combined $385 million, have six children who are enjoying the benefits of their parents’ success. Each year, Pit and Jolie spend around $10 million per year on their kids, including $5 million on private jets so their kids can tag along with them, $2 million on the best tutors and nannies, thousands of dollars on birthday parties for each child.

Parents: Will Smith (actor and rapper) and Jada Pinkett-Smith (actress)

Jaden and Willow Smith might have famous parents who are worth about $240 million together, but these two teenagers have already have already made a name for themselves in the music and film industries. Jaden Smith has a net worth of $8 million, due to his roles a few movies, including “The Karate Kid” in 2010. Willow Smith, on the other hand, is carving name for herself as a singer, releasing her first single also in 2010 called “Whip My Hair”.

Blue Ivy Carter is one of the only children in Hollywood whose parents have a combined net worth of $1 billion. She has been known to have very lavish birthday parties, such as a “Frozen” themed party with ice sculptures and a $2,000 cake for her third birthday. For Blue’s first birthday, she recieved a $80,000 diamond- encrusted Barbie Doll.

“I feel like Blue Ivy definitely has some of the coolest parents and her life is so fun. She is also probably going to be so talented like Beyonce and Jay-Z”, stated senior, Zoe Cuva.

Although soccer legend, David Beckham, is now retired, he still has a net worth of about $350 million. In addition, Victoria Beckham, who rose to fame with the female pop group, Spice Girls, has a net worth of $300 million. The couple’s four children, Brooklyn, Romeo, Cruz, and Harper, have been wearing designer clothes since before they could walk. Harper, the couple’s only daughter, had a party that cost about $79,000 for her first birthday. David and Victoria also spent about $200,000 on a sixteen foot tall brick playhouse for their son Brooklyn’s sixth birthday, and a $50,000 tree house and a $187,000 playhouse for Romeo and Cruz.

North and Saint West were born into one of the most famous families in Hollywood. Even before they were born, the media was tracking every second of Kim Kardashian’s pregnancies. As the daughter of Kanye West and Kim Kardashian, who are both big names in the fashion world, North has already become a little fashionista and has been on several runways. West, who is worth around $130 million, loves to spoil his daughter with extravagant gifts like a $62,000 diamond encrusted tiara and $12,000 toy black SUV.

Sophomore, Grace Buckhorn, stated, “I think it would be so fun to be in the Kardashian family. There’s always drama, but even the little kids get to attend the coolest parties and go on the nicest vacations.”

Flynn Bloom, son of Miranda Kerr and Orlando Bloom, has been traveling the world since birth because of his mother’s modeling career. Although each of his parents have a net worth of $35 million, Miranda and Orlando make sure that they don’t spoil their four year old. For Fynn’s first birthday, Kerr planned a simple party with a gluten free birthday cake.

Surprised by this, freshman Olivia Tremonti, admitted, “I am so used to celebrities spoiling their kids with all nicest things, so I think thats it’s good that Miranda Kerr doesn’t do that with her son so he learns to appreciate things.”

Mason, Penelope, and Reign, not to be outdone by their cousins, North and Saint West, have been living an extremely privileged life because of their family, the Kardashians. They are always dressed in the nicest attire, have gone on countless exotic vacations, and have huge, lavish birthday parties. With Kourtney Kardashian’s net worth of $25 million and Scott Disick’s net worth of $12 million, they have more than enough money to splurge on their kids. On Christmas, the family’s living room is filled to the brim with gifts like a drum set, toy cars, and a foosball table.