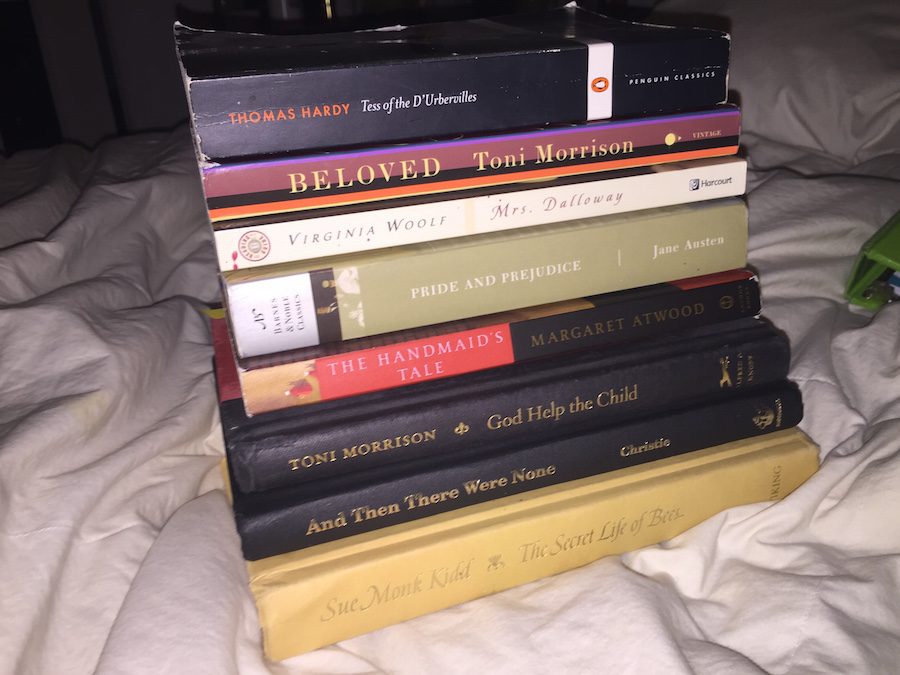 With busy schedules packed with sports, clubs, and homework there never seems to be time for reading anymore, yet teachers always find a way to incorporate it into the curriculum. This gives students a chance to read classic books they may have never found interest in otherwise. Though mandatory books for class are not always a first choice, sometimes those books can become student’s favorite books of all time. Here are a few books that Academy students have ended up loving that were required for school.

“I love this book because it’s such a good love story but it’s not like the intense ones in today’s world. It’s more romantic and it shows how sometimes you end up falling in love with the person you least expect to.

My first impression was that I got annoyed by Pride and Prejudice. It’s my mom’s favorite movie so I have seen it a million times and I hated watching it cause I thought it was boring, but now I love watching the movie because it is very similar to the book and it’s so romantic and I love Mr. Darcy.

This was different because it wasn’t like Shakespeare where everyone dies after falling in love, but it’s more romantic and easier to relate to in a way. There are many different aspects to it that change the story throughout. Originally, in the beginning, I hated Darcy because he seemed rude, much like Elizabeth’s view of him. However, throughout the book, you realize the same time Elizabeth does, that Darcy is actually a good guy, they just got off on the wrong foot, and ever since, he has been trying to help her and make it right.”

To Kill a Mockingbird (9th Grade), by Harper Lee

Sophomore, Maria Almendares, looks back at her favorite book from the previous year.

“I liked this book because of the relationship that the narrator has with her dad and with her older brother. I thought it was going to be boring and about hatred and prejudice, and then towards the end I found out it was more about the narrator discovering she was independent. Also, it was about building the relationships between her brother and her father, along with seeing a new realm she hasn’t seen before. Because it is an interesting story it has to do with history and it tell sit in an interesting way and with a unique perspective. My favorite part of the book was the trial scene when Atticus Finch was defending an African American in court who had been accused of rape, the scene was really intense and it was the climax of the story and it kept me wanting to read more.”

And Then There Were None (10th Grade), By Agatha Christie

Senior Teresa Toranzo remembers one of her favorite books that she has read throughout her high school career.

“Sophomore year we had to read And Then There Were None and it has become my favorite book of all time. I have always loved the mystery/thriller genre of books and have always been drawn to those books, so I knew I would at least enjoy it. When I began reading it, I could not believe how amazing of a write Christie is. She perfectly described the setting and characters without making it sound like a child’s book. Now, whenever I see it in my room, I just get these flashbacks of how I view the book, it’s almost like this mini movie quickly runs in my head. I feel like a lot of the books we have to read aren’t as interesting as And Then There Were None because as you get into higher level courses you read, to be frank, boring books, so that complete joy in reading is lost.”

Since this novel was highly popular among many students, Senior Rachel Tata also comments on the thrilling book.

“It was a murder mystery novel and it kept me on the edge of my seat the whole time. I couldn’t put it down so I finished it in a day. At first, the book starts out kind of slow because it introduces each character one by one, but after the characters arrive at the island and one of them dies, it just got better from there. I was hooked! We never read a murder-mystery novel. It was just a really easy, entertaining and thrilling read. Usually another book would be a lot longer and more difficult to analyze at first glance.”

Junior, Emily Venezia, had much to say about a summer reading book that she now treasures.

“I loved the book for the way it was written and the way that the author decided to cut up the plot line. It wasn’t in chronological order so it made it more interesting. My first impression was ‘oh my god more summer reading’. When I finished it, it was one of those books that was so good that you think a sequel or a movie would ruin it, so while you were sad it was so well written that nothing more could be said. That book made me want to be become a person from the late 1800’s that followed the circus around the world, like the dreamer. It was magical.”

Senior Addison Diaz enjoys reading in-school novels and this book was one that has stuck with her.

“I really ended up loving Slaughterhouse-Five by Kurt Vonnegut. I tend to like most of the books I read for school (with the acceptation of anything Shakespeare) but SH5 was definitely my favorite. I loved the dark humor and Vonnegut’s style and the way he addresses death. It’s the kind of book that can make you giggle and get teary eyed in the same chapter. I also really loved the supernatural/ extraterrestrial aspect of the book. It really makes you think while keeping you interested. From the title I thought the book was going to be very gory or gruesome and I wasn’t sure that I was going to like it. That changed after I read the first chapter because Vonnegut gives a really introduction to the story. I actually like most of the books I read for school but this one was different because of the structure of it and the conversational tone of the whole book.”

"The hardest thing on earth is choosing what matters."
– Sue Monk Kidd, The Secret Life of Bees

Junior, Maddy Ruppel, also enjoys And Then There Were None, but this novel also became a favored book to remember.

“I didn’t expect to like it, but it was a different perspective because I never really saw bees that way. I didn’t know what to expect, I thought it was going to be random stuff about bees but it reflected the life of people in the South. It reflected racism and I never realized the time period was that bad.”