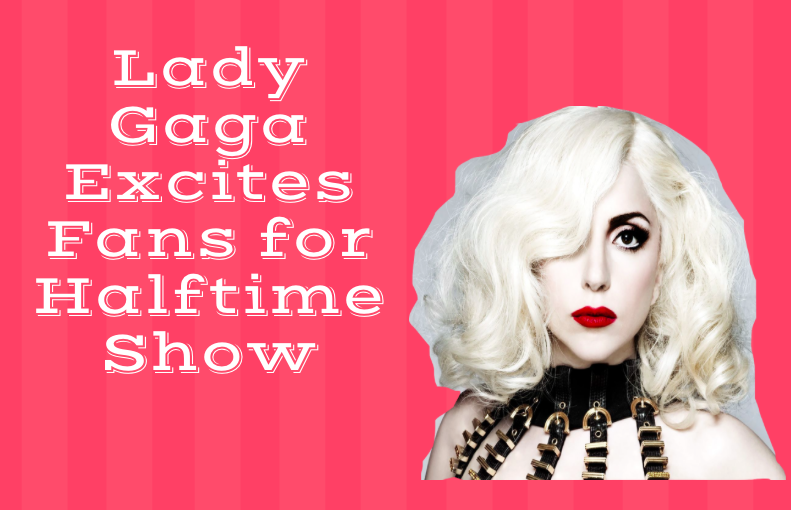 Lady Gaga refers to her fanbase as the “Little Monsters” and poses herself as being the “Mother Monster”.

As the NFL season wraps up, devoted fans anxiously await the most popular sports event of the year, Super Bowl LI. However, the Super Bowl excitement extends to everyone, from major football devotees to music fanatics, with the legendary Halftime Show. Each year, a major artist who has changed the music game more than once is invited to perform at a national concert with millions of Americans eyes’ on them.The unique Stefani Joanne Angelina Germanotta, better known as pop star Lady Gaga, is set to headline the Pepsi Zero Sugar Super Bowl LI Halftime Show.

Ever since Gaga’s release of her first hit single, “Just Dance” in 2008, many have been anticipating Gaga’s presence at the Halftime Show. Her catchy tunes and eccentricity have been deeply enjoyed internationally, proven by her many sold out shows throughout the world. Through her fame as a music artist and her undeniably outrageous outfits, she has been given the opportunity to grow in her fashion and has even been recognized as a style icon at the CFDA Awards. Therefore, it’s safe to say that Gaga has had more than a few celebrations for her authentic tastes in music and style. Below are six reasons why the theatrical Lady Gaga is adored by her “Little Monsters”:

1.Gaga is beloved internationally for her killer voice. Through her pop ballads and other stellar displays, Gaga showcases her wide range of vocals.Many argue she has a voice similar to Madonna.

2. What she brings to the table is different in each song and concert that she performs. She refuses to stick to one form of pop music, multiple albums have been dance-pop whereas, “Joanne” is soft rock and pop, and she broadens the horizon for her music and personality each time.

Sophomore Sophie Ragano is excited to see her take the stage because “she keeps things unique, interesting, and fun.”

3. Her shows are lively and theatrical, a reason for why her upcoming live performance at the Super Bowl is highly anticipated.

The Patriots and Falcons must be so excited to play at the Lady Gaga concert!!

Senior Abby Morris says, “Lady Gaga is pretty crazy, but I like it. I am excited for her performance.”

4. Through tweets and her other social media platforms, it is also shown that Gaga is a political and social activist. She has proven herself to be a defender for basic human rights by taking stands as a bold advocate for LGBTQ equality; by doing so, in 2009, she created a video that campaigns against the law that does not allow any gay people to serve in the military. Lady Gaga is also a major supporter of feminist rights and embracing womanhood.

#WomensMarchOnWashington I'm so proud to be a woman alive during this time. Look how strong we are. And there for each other. That's love❤️ https://t.co/rTCYiUn6qB

5. She has also instituted the Born This Way Foundation, a nonprofit organization that supports the empowerment of young people and sheds light on confidence, kindness, and other related matters.

RT if you're ready to #BeBrave this week! pic.twitter.com/7SFHvLrMEt

6. One of the most stunning traits of “Mother Monster” is her ability to embrace the realness in people. Rather than playing her cards safely, Gaga has written her own lyrics ever since she began to reveal herself in the most meaningful way for those listening to her own anthems. On her latest album, Joanne, Gaga writes about her emotional ambitions and struggles that are both present in today’s world and live internally within her.

Freshman Kara Kinevas says, “I am excited for Lady Gaga’s performance because she always has the craziest and interesting costumes.”

Lady Gaga’s vocals and the confidence she manifests through her bizarre outfits have earned her the chance to be premiering the Pepsi Halftime Show.

Tune into FOX on February 5 to watch the 2017 Super Bowl and see Lady Gaga and her entourage tear up the stage.