The Pixar Theory: Internal References Connecting Each Pixar Movie to the Others 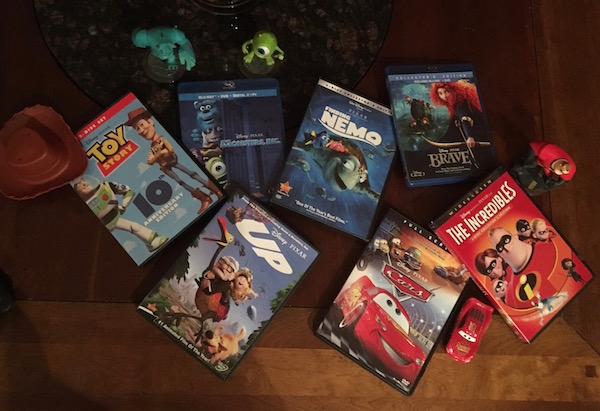 A Pixar Franchise Guardian rejected the idea that the films take place in the same universe, saying: “No, the movies were sort of made in a different order by different directors in different times, in different places. It’s cool that it all worked out that way, but it probably was not intentional.” Photo Credit: Emily Hoerbelt/Achona Online

Disney’s Pixar Animation Studios has created seventeen films with four more coming over the course of the next three years. Jon Negeroni wrote a thesis in 2013 titled, “The Pixar Theory” which explains how all of the Pixar movie exist in one fictional universe.

Brave is said to be the first movie to happen in the Pixar universe set during the Middle Ages. It is the first movie to explain why animals have human-like qualities. The witch could have used this magic on other Pixar animals along with the bears in Brave, enhancing their artificial intelligence. Remy, in Ratatouille, for example, wants to learn how to cook and is much better at it than most humans.

Rumors of animal intelligence had to have spread after learning of Remy’s unique abilities and would most likely get to people traveling the globe, people like Charles Muntz from Up. After hearing about this amazing new discovery, he creates special collars for his dogs allowing them to speak.

The company, Buy n Large, is first introduced in the movie Up when they try to buy Carl’s house.

Junior Abigail Rodriguez said, “One of my favorite connections is the fact that BnL is the company that wants to take Carl’s house in Up and the same company that eventually makes humans leave Earth in Wall-E.”

The next Pixar movie to feature animals with enhanced AI is Finding Nemo when Marlin and Dory travel the entire ocean to find and rescue his son.

The Incredibles is set in an alternate version of the 1960’s, in a world of supers. Syndrome, the villain of this film does not have superpowers but he is able to mimic the supers through his discovery of zero-point energy. To kill all of the supers and achieve his goal of being the greatest super of all time, he creates multiple versions of the Omnidroid with AI strong enough to exist even after it is destroyed.
This is where the toys of Toy Story come in.

Toy Story takes place about 40 years after The Incredibles, giving the machines plenty of time to develop BnL. Syndrome’s zero-point energy is essentially electromagnetic energy in a vacuum that travels in invisible wavelengths and provides as a reasonable explanation as to how the toys are able to come to life. All throughout the series, some of the toys develop a growing resentment of humans and the way they treat them. They do not ever rise up against humans because once they are fully abandoned by their owners, the toys lose their ability to come to life, therefore human life is what is giving the AI its power.

It is believed that after Toy Story, humans and animals will not exist for a long time because machines end up overpowering them to the point that the only things left are cars.

Humanlike cars with incredibly advanced AI seem to be all that’s left once the machines get rid of animals. But we know that humans still exist because of all the places the cars visit in Cars 2 and the fact that machines still need humans to survive. Without humans, cars are forced to rely on fuel which leads to an energy crisis in Cars 2.

About 700 years later all that is left of the human race lives on a spaceship called the Axiom. The autopilot manipulates the captain and takes control of the humans on board. Back on Earth, Wall-E is the only robot that still exists because he is obsessed with humans. The fact that he collects human stuff and watches old movies of humans keeps him alive.

At the end of the movie, Wall-E plants a tree that strongly resembles the tree in A Bug’s Life.
The bugs in A Bug’s Life behave extremely differently from animals in other Pixar movies in that they have cities and are constantly building things so it is safe to say that A Bug’s Life takes place even farther in the future when animals are able to live much more advanced lives than animals of the past had. Even though humans have returned to Earth, there are not very many of them and the bugs are never afraid of them, only birds and bigger bugs.

By the time humans, animals, and machines live in harmony once again, monsters begin to evolve. Monsters Inc is set farthest in the future of all the Pixar films. In a world without humans the monsters have to travel back in time through doors to collect human screams and laughter to power their entire world. This also explains why the monsters are trained to be afraid of humans and not touch them or anything in their world in fear of affecting the future. Boo however, comes in contact with monsters and grows up knowing that their world exists and devotes the rest of her life to trying to find a way to get back to Mike and Sully.

While on this trip she discovers magic that she uses to go back in time to the Dark Ages of Scotland. Yes, that’s right, Boo is the witch in Brave. There is plenty of evidence from the witch’s cottage leading to Boo; she is obsessed with bears, she has a picture of Sully on the wall, and she can change the contents of the cottage by walking in and out of the door.